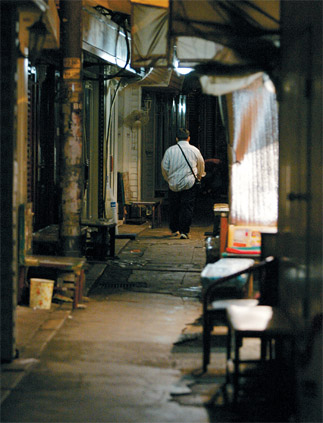 A man walks down an alley in Miari Texas, northern Seoul, where sex workers still operate despite a recent government crackdown.[JoongAng Ilbo]

“Oppa, wanna have some fun?”

A middle-aged woman throws a questioning look at a male passerby who shakes his head and goes about his business.

She’s standing at an intersection in Yeongdeungpo, western Seoul, which used to be one of the better known red-light districts in the capital. Most of the storefronts are shuttered during the daytime and come alive at sundown.

But business is slower than usual, partly because of the bad economy but also, according to government officials, due to the success of the Anti-Sex Trafficking Law, which was enacted five years ago amid great fanfare to beef up existing anti-prostitution laws.

However, except for cosmetic changes, the lucrative sex trade is still very much around, experts say. The only difference is that since the law was enforced, the sex trade has evolved.

More visible outlets such as the one in Yeongdeungpo have taken the brunt of the law as have the once notorious neighborhoods of northern Seoul’s Cheongnyangni and Mia-ri Texas, which are both scheduled for urban redevelopment.

A tell-tale sign that business was, if not booming, reasonably healthy came earlier this month when the Seoul Metropolitan Police Agency announced it would transfer hundreds of police officers in the southern Seoul districts of Gangnam, Seocho and Suseo. The move has been widely interpreted as an effort to sever ties between the police and entertainment establishments offering sex services.

The decision to transfer the officers, all from a range of departments, came after it was discovered that police officers had inappropriate relationships with massage parlors in those areas.

The current going rate for massage parlors is 170,000 won in cash and 190,000 with a credit card. As credit card records are easy to trace, customers and owners tend to prefer cash.

Nowadays, adding to the sex-for-cash businesses, hyugae-tel (resting rooms), where customers can call up sex workers and then later join them at another venue, are expanding rapidly, while commercial sex offered online, which is harder to track, is also growing.

Still, government officials say the implementation of the law from five years ago has helped significantly reduce the scale of the sex industry.

“If you look at the numbers, coming down from a 24 trillion won industry to a 14 trillion won one is a step forward,” said Cho Sin-suk, an official at the Ministry of Gender Equality. According to ministry estimates, there were 269,000 active sex workers in Korea in 2007, a decline from 320,000 five years earlier.

Some critics of the government’s efforts argue that it’s relatively easy to crack down on the more obvious targets, such as the capital’s red-light areas.

But in a society where there are plenty of outlets that are not strictly selling sex but carry that option depending on clients’ requirements, the squeeze on one side is certainly helping business on the other.

A “room salon” falls into that category, a venue often used for business meetings but which also offers other services. 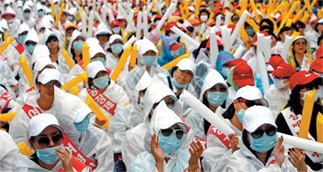 About 3,000 sex workers in Yeouido, Seoul, in a 2007 protest against the implementation of the Anti-Sex Trafficking Law, which came into effect in 2004. [JoongAng Ilbo]

“Our clients are very specific. When they have a business meeting they ask me who is available for icha [stage 2 of an evening’s entertainment],” said Ye Ji, not her real name, who is a “madam,” a person in charge of young women whose job description includes singing, conversation and sex.

Her shop is in Yeoksam-dong, southern Seoul, where many upscale room salons are clustered. Icha can be used to refer to the second bar or restaurant for a group to head to, but the slang meaning is sex with a female partner.

Even in the midst of a global economic downturn, Ye said her business is doing well. She has her own driver and car, an Audi, a sekki madam (second in charge) and a handful of waiters.

“My clients don’t ask for a discount,” said the madam in a matter of fact tone.

Depending on what liquor and side dishes are ordered, a four-man party might pay anything from 1.3 million won to 1.7 million won for a 12-year-old or 21-year-old bottle of whisky, the brand determining the price.

The icha fee is not included in this price. A customer usually pays around 600,000 won to the madam, who creams off her fee, and the sex worker takes the man to a nearby motel.

Prostitution also involves sex trafficking in and out of the country, something the U.S. State Department highlighted last month in its latest annual report on human rights.

“Women from Russia, other countries of the former Soviet Union, China, Mongolia, the Philippines, and other Southeast Asian countries were trafficked to the country for sexual exploitation and domestic servitude,” reads the passage referring to South Korea’s sex trade. They were recruited personally or responded to advertisements and were flown to Korea, often on entertainer or tourist visas, the report said.

In some instances, the report went on, once these visa recipients arrive, their new employers illegally hold on to the women’s passports. In addition, some foreign women recruited for legal and brokered marriages end up, once married, in situations of sexual exploitation, debt bondage and servitude.

Korean women were likewise trafficked primarily for sexual exploitation in the United States, sometimes through Canada and Mexico, as well as to other countries, such as Australia and Japan, the report said.

To try to curb prostitution, Korea introduced a special law in 2007 that gave the authorities the power to deny the issuance or renewal of passports to men who had a track record of purchasing sex.

In addition, the Ministry of Justice is running an education and awareness program for men who have been prosecuted for buying sex. Last year, 17,956 men took part in the program.

One positive aspect of the story is the government is not in denial. “We check if we think the findings in the U.S. report are true or not true and then file a protest, but at this point we do not have any plans to do so,” said Park Yu-ri, a Foreign Ministry official.

An official at the U.S. Embassy in Seoul, speaking on condition of anonymity, said that before the visa waiver program became effective, one of the reasons South Korea was not accepted to the program was due to concerns regarding sex trafficking.

“Per year we were looking at maybe 40 to 50 cases,” said the official. The recent U.S. State Department report also noted that “NGOs continued to express concern that sex tourism [for Korean men] to China and Southeast Asia was becoming more prevalent.”

Just last week, the police arrested a group of traffickers who had recruited Korean men and transgenders and illegally transported them to Japan’s brothels in Yokohama’s red light district.

While bribes provide an obvious incentive for overworked, low-paid police officers and officials, experts point out that the legal framework currently in place in Korea won’t curb the sex trade here anytime soon.

Some observers think the country’s sex industry took off during Japan’s colonial rule over Korea (1910-1945). “There were some brothels before but Japan industrialized the sex industry for its own needs,” said Lee Jeong-han, a sociology professor at Cheongju University. “Even today the whole culture of doing business in room salons comes from Japan.”

Nevertheless, Korea’s past governments are not free from blame. In the aftermath of the Korean War, the term yangbuin, a term reserved for Korean bar girls and sex workers at major U.S. camptowns, came into use. These brothels provide sexual services for U.S. soldiers.

The camptown economy peaked in Korea during the 1960s when the country desperately needed foreign currency to rebuild its war-torn economy. Katharine Moon, a professor of political science at Wellesley College, said in a 2002 study that at one point the camptown prostitution industry contributed nearly 25 percent of the country’s gross national product.

One of the problems facing the police is that it is very difficult to prosecute an individual for buying sex services because of the lack of evidence, a point highlighted by an Asia Foundation study in 2006.

“It has become a new trend in the sex industry to use other body parts [hands] to perform sexual service without having intercourse. Up to now, the Korean courts have made different decisions on whether to regard this as sex trade or not,” the study said.

A police officer who declined to be named admitted that the current focus of all crackdowns is geared toward the better known red-light districts as a successful campaign is more visible to the public.

“We have limited resources and there is only so much you can do,” said the officer in Yeongdeungpo. “We know that when we close the red-light districts these women will just use another venue. There is no perfect solution.”

The numbers seem to reflect the reality. In 2003, the number of men arrested for buying sex services stood at 12,737 but that number is expected to reach 40,000 this year.

Even with the government initiative to clamp down on the sex industry, the Korea Center for Disease Control and Prevention says that more than 100,000 women in massage parlors and room salons are required to take mandatory tests every six months for venereal disease under the Epidemic Prevention Act.


A state of mind

Eradicating one of the oldest trades is perhaps a Sisyphean challenge for the government and law enforcement agencies, a task made doubly difficult by the ingrained attitude among many men that commercial sex is not wrong.

Three years ago, in a survey of 448 males by the Korean Institute of Criminology 58.5 percent said they had experienced buying sex at least once. In recent surveys conducted by the Ministry of Gender Equality that number still hovers around the 50 percent mark.

“You can’t put a plug on sexual desire. People who look like they never would buy sex suddenly go wild once they get some alcohol in their system,” said the room salon-owner, Ye Ji, cynically.

“This is almost a recession-proof business.”