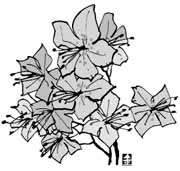 About 130 million years ago, flowering plants appeared on Earth. They evolved into five different groups during the 5 million years right after what is known as the “big bang” for flower evolution. Although it may seem like a long time, 5 million years is just a blink of an eye in geologic time, the Earth’s 4.6-billion-year history.

A flower is a means of reproduction for plants.

Flowers have evolved to fit the shape of the snouts or beaks of birds, bats and insects, which help disperse pollen, resulting in more flowering and fruit formation.

In Madagascar, Charles Darwin discovered an orchid with white and waxy petals, Angraecum sesquipedale, with a nectar tube 30 centimeters in length with only the distal end filled with nectar. He postulated that there must be an as yet undiscovered moth with a proboscis capable of extending 25 to 30 centimeters that visits this flower. The predicted pollinator was discovered - a hawk moth now named Xanthopan morganii praedicta in southern Brazil. It had an appropriately long proboscis. This was a perfect example of the mutual dependence of an orchid and a specific pollinator.

Flowers need to maintain their beauty to attract bees and butterflies. Most flowers live short lives due to their endeavors for maintaining a beautiful color and scent. The Rural Development Administration has recently unveiled its successful research results for preserving flowers for more than two years. The water in flowers is completely removed after being stored in ethanol, processed by preservative and dyed, and the shape and feel of the material remain unchanged.

The ume (plum) and cornus (dogwood) flowers bloom in early spring in the central region as well as southern areas of the peninsula. The meteorological administration forecasts that forsythia, azaleas and cherry blossoms will be in full bloom 10 days earlier than usual due to warmer winter temperatures. They predicted that forsythia, azaleas and cherry blossoms will spring to life on the 20th, 21st, and 4th day of the following month, respectively, in Seoul. Seoul National University Professor Ho Chang-hoi noted that forsythia and azaleas bloom 2.4 days earlier every 10 years since the 1920s, due to global warming.

The first bloom date of azaleas in Seoul is March 31. Therefore, the flower will bloom 10 days earlier than usual this year. In the 1960s it would begin to bloom in early April, 12 days later than now.

The song “Azaleas” was sung in memory of fallen patriots of the 4.19 Movement, because of the dazzling brightness of the spring flowers in April. If global warming persists, azaleas will bloom and die out in March. At this rate, our descendants might wonder why the flower was associated with the 4.19 Democratization Movement.