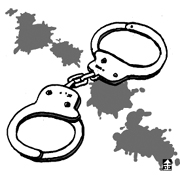 On April 8, 2002, employees of Merrill Lynch, the largest securities firm in the United States, stopped working and gathered in front of the television. Someone groaned in pain, saying, “This is a terror bomb.”

An urgent press conference called by New York State Attorney General Eliot Spitzer was being televised live. On that day, Spitzer disclosed some e-mails exchanged between Merrill Lynch analysts. It was shocking to hear analysts in the firm tell colleagues that stocks recommended to their customers were “junk.” Less than two months after the press conference, Merrill Lynch admitted the breach of trust and agreed to pay a fine exceeding $100 million.

Taking possible political pressure into consideration, Spitzer succeeded in bringing the giant company to its knees. It was a prime example of how important timing is in terms of special investigations dealing with organized crime or corruption.

The manner of his investigation was characterized by how he could force a confession from his guilty suspects. He waited for hours until the suspect finally opened his lips in the investigation room. Instead of compelling him to confess, he encouraged the suspect to remember the situation. In addition, he prevented prosecutors from exchanging investigation information or consulting with each other.

These efforts were focused on winning at trial. If prosecutors induce a confession, court rulings can still be easily reversed. But if prosecutors try to arrange their investigation results like a mosaic, an unexpected outcome, contrary to facts, may occur.

Yoshinaga gained detailed insight into evidence unfavorable to the prosecution’s case and began to investigate in earnest only when he was assured that the suspect was definitely guilty. Not surprisingly, he never suffered defeat due to unforeseen evidence, although he brought countless politicians to court.

The case of Taekwang Industries chairman Park Yeon-cha is currently under investigation.

Why don’t we see corruption cases disappear despite all of the investigations? The prosecution must show that “black money” can be discovered at all times. To do so, a refinement of logic, rather than enthusiasm, could be a recurring prerequisite in tracing back the course of investigation to find guilt.

The Park Yeon-cha case should serve as a catalyst to take the level of Korea’s special investigations into a higher plane, drawing on Spitzer’s bravery and Yoshinaga’s logic.