[Talk of the town]
TV bride to get hitched for real 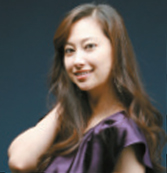 Actress Shin-ae, 27, may play a bride on TV, but this time she’s tying the knot in real life.

Shin-ae, who until recently appeared in MBC-TV’s “We Got Married,” will walk down the aisle this May, according to an announcement by her management company, Ciel House.

Very little is known about her fiance, only that he is a family friend, two years her senior and a student studying in Seattle in the United States.

They reportedly started dating early this year. The couple moved up the date for their marriage as the actress’s father is showing signs of poor health.

Fans will be relieved to know that the wedding will not interfere with Shin-ae’s acting career. In a long letter posted on her Web site Wednesday, the actress reassured fans that she will continue acting for a long time even after getting hitched.

Shin-ae, who recently played the empress Hunjungwanghu in KBS2-TV’s “Cheonchutaehu,” made her debut in 2001 as a model for a cosmetic brand.

The actress is also famous for her appearance in the 2003 movie “Season in the Sun,” and the TV drama “Summer Scent,” which was widely popular across Asia.