A Snowman springs to life on stage

A Snowman springs to life on stage 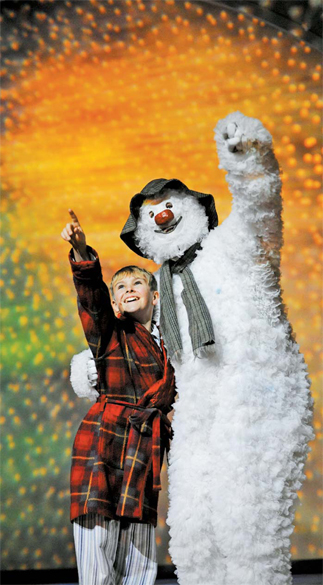 ‘The Snowman’ is currently on stage at the Seoul Arts Center in southern Seoul. Provided by Credia

A snowman in April? It seems like the oddest combination since the tale of the Beauty and the Beast. But the arrival of the family show, “The Snowman,” during this season of flowers has earned rave reviews from Korean audiences. Ambitious bloggers are even competing to upload their reviews on local Web portals.

The story depicts the magical journey of a snowman and a boy named James. Though the original story was written for children, the production is sure to enchant audiences of any age.

The 110-minute show is based on the 1978 children’s book “The Snowman,” which was illustrated by Raymond Briggs. The picture book was made into a 26-minute animated film in 1982 and later adapted for the stage. The Birmingham Repertory Theatre production has since been a hit for the past 16 years.

Like the children’s book, the show is non-verbal, but the sumptuous music performed by a live band consisting of piano, flute, bongos, timpani and tambourine, as well as the flawless acting of the entire cast, keeps any boredom away. 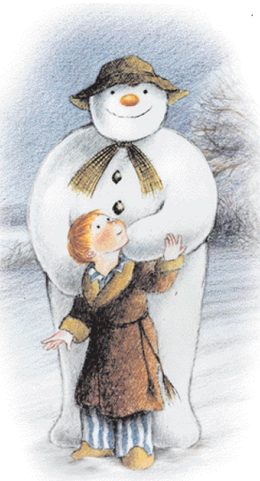 James and the Snowman. Provided by Credia

The first part of the show follows the story of James, who makes a snowman one winter day. James does not want the snowman to shiver in the cold, so he gives him a hat and muffler. That night, at midnight, the snowman comes to life and the pair sets off on a journey to the North Pole to meet Santa Claus.

Along the way, we meet a diverse group of characters whose lively dancing is captivating enough to make audiences move along with them.

A variety of snowmen appear in Act II. A dance for a cowboy snowman and an Indian snowman is particularly entertaining. But hold your applause for the snowman from Korea. He arrives dressed in a rainbow-colored costume and does the jumps and twirls associated with the Korean folk music known as nongak, or farmers’ music. His head rolls and barrel turns will be instantly recognizable to anyone familiar with this music and dance genre.

The highlight of Act II is a scene where the snowman and the boy walk while suspended above the stage. This was particularly delightful for the young people in the audience, who could be heard saying, “Mom, I want to fly, too.”

The Snowman proves that a show without words can still be a thrill.