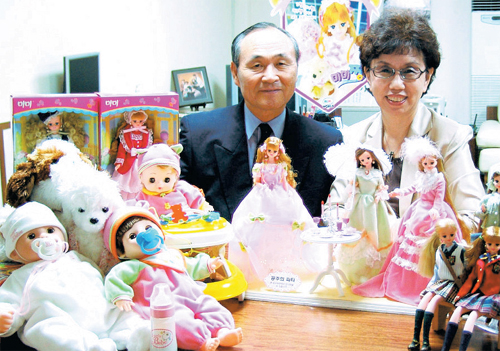 Lee In-su, left, the founder of Mimi World, and his wife, Kim Yeong-hui, pose in front of the company’s dolls. [JoongAng Ilbo]

In the late 1980s, Mimi World decided to humanize Mimi by giving her parents, a sister and a pet. Some girls were so taken in by the promotion that they started to write to their doll through the company Mimi World and make phone calls.

Not wanting to shatter the children’s fantasy, Mimi World created a position solely for answering letters and phone calls.

Today the position no longer exists, which might be a reflection of the economic times since young girls are still going to believe Mimi is real, just as kids around the world believe in Santa Claus.

Like Barbie and her boyfriend Ken, Mimi also has a playmate, and he was named Toto.

Like Ken, who according to Barbie mythology met his girlfriend backstage during a shoot for a commercial in the early 1960s, Toto had little to do in the early years, since kids that age aren’t interested in boys.

But the people at Mimi World seized upon the pretty boy syndrome that engulfed Korea several years ago and relaunched Toto with a more feminine look in 2004.

He was also given a new name: Jun.

The brains behind Mimi are Lee In-su and his wife, Kim Yeong-hui. Today, Lee is the CEO, Kim is the executive director and their son Jong-ryeol has taken on the role of managing director.

They employ 10 designers, five of whom are mothers. They say being around kids helps them keep in sync with the needs and wants of children today.

They also rely on their kids and their peers at nursery schools and kindergartens as the test bed for new dolls.