Transformational art with butterflies and sharks

Transformational art with butterflies and sharks 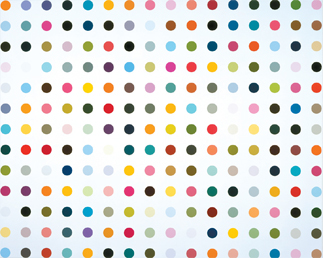 You can decide for yourself if you pop down to Daegu for an exhibition of the work of Damien Hirst, one of the most successful artists of our time.

Fifty Hirst pieces produced between 1990 and 2008 are on display in Leeahn Gallery under the title “Re-birth,” a concept that explores the theme of death.

The British artist earned notoriety for his series in which dead animals including a shark, sheep and cow were preserved in formaldehyde. In some cases, these animals were dissected into large pieces before they were immersed in the toxic chemical. “The Physical Impossibility of Death in the Mind of Someone Living,” a tiger shark submerged in formaldehyde in a glass-paneled cabinet, is one of his major works. 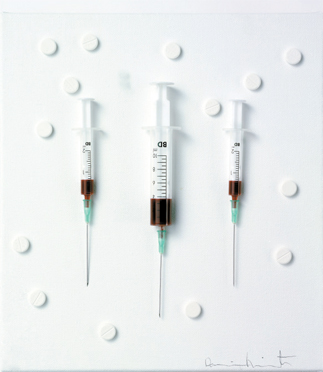 “Untitled Pill and Syringe 3,” which consists of three syringes, needles, resin and paracetamol pills on canvas.

Despite the controversies, or perhaps because of them, Hirst’s works are some of the most expensive on the market today.

One of his most recent works “For the Love of God, Believe” is a platinum cast of an 18th-century skull that has 8,601 diamond pieces weighing a total of 1,106.18 carats attached to it.

Though this work is not shown in the exhibition, a lesser-known piece is. It’s a skull with flies glued on to it called “The Fear of Death.”

Another butterfly painting, “Zinganja,” was made with butterflies stuck onto a pink, circular canvas.

Hirst used butterflies because their life cycle is determined by the larval caterpillar stage, an inactive pupal stage and a spectacular transformation into a colorful winged adult form.

“Butterflies symbolize a transition to different life stages,” said Kim Hae-kyung, the Leeahn Gallery curator in charge of the exhibition. “The two pieces revel in death but emphasize the beauty of these life phases.”

“Day by Day,” made of stainless steel, glass and wooden cabinet, plastic dymotape and pills.

The twist is that this painting was produced as an altarpiece to be placed near a tomb, which adds to the theme of death. 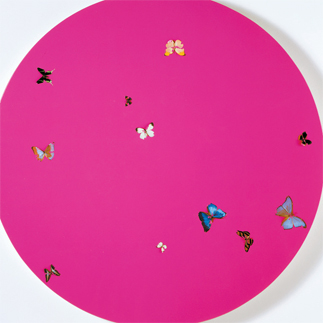 “Day by Day” consists of painkillers placed in a white cabinet with glass windows. Like other pieces by Hirst, it is typified by minimalism. It has a similar theme with “The Dance of Death,” which is composed of hundreds of pills in a large, reflective stainless cabinet in Leeum, Samsung Museum of Art in Seoul. Though they are different in size, the two pieces show contradiction between life and death.

“The pills are to reduce pain but no matter how much people take them, their life will eventually end,” Kim said.

The exhibition continues through April 25. The gallery is open from 10 a.m. to 6 p.m., except Mondays.

A guided tour will be available at 3 p.m. from Tuesday through Sunday.