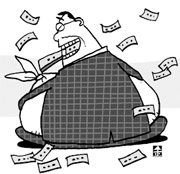 Guan Zhong, prime minister to the duke of Huan in the state of Qi, had listed li, yi, lian and chi (ye, ui, yeom and chi in Korean), as the four basic requirements for running a state. He made great achievements during the Spring and Autumn period of ancient China.

According to Guan, if one of the four factors is lacking, a country becomes unstable. If it lacks two, a nation is in danger. If three are lacking, the foundation of the state is ruined, and if a country does not have any of them, it will collapse.

He explained that ye means not to breach the law, ui means not to boast, yeom means not to hide one’s evil and chi means not to pursue wrong. He called these proscriptions the four basic concepts that a leader must not forget when governing a state.

Ye and ui are more about governance or public ethics. Meanwhile yeom and chi, calling for integrity and a sense of shame, are about personal morality. In other words, the first two are institutional requirements and the latter two are about cultivation of personal virtue. Thus, when emphasizing a person’s disposition, yeom and chi are regarded as more important than ye and ui.

A person without integrity is greedy for everything. On top of this, if he does not have a sense of shame, he is prone to committing all kinds of mistakes and wrongdoing. If an official in a public post does not have the two virtues - yeom and chi - he is very likely to harm the entire society.

When judging one’s personality, yeom and chi are important criteria, especially in Korea. Yeom and chi have been transformed into the word yamchi. The expression, “lacking yamchi,” means a person is brazenly unrepentant for his wrongs. Such a person is scornfully called yamche in South Korea and yamchi jaengi in North Korea.

In Korea, a person without yeom and chi is also described as a brazen person or a person who makes one lose his appetite. If a person does not have dignity or integrity, people say he does not have any sprout, meaning he is unlikely to grow into a big tree. These sayings demonstrate that the virtues yeom and chi are regarded as very important in Korean society.

After the “Park Yeon-cha list” scandal, the “Kang Geum-won list” appeared, too. A former president and influential figures in his administration are allegedly involved. Some powerful people in the current governing party circles are also implicated in the scandal. The impression that the entire political community is a dead zone for moral values gets stronger.

We cannot surrender our country to such yamche. Why don’t we give intensive ethics education beginning from the first grade in primary school, with textbooks that teach one should stay true and keep one’s promises.

We desperately lack people with integrity; instead there are the cunning yamche.