Slicing pork off the economic debate

Slicing pork off the economic debate 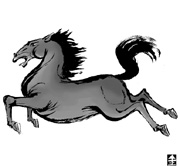 In ancient times, horses were essential weapons of warfare, assisting armies to explore unknown frontiers and achieve new conquests. Getting the best horses was a key military strategy. About 2,500 years ago during the so-called Spring and Autumn Period in China, warriors indulged in an intense hunt for the best breeds.
A man named Bole, born during the Qin Dynasty, was reported to have possessed a genius for picking out the best horses. One day Duke Ma summoned the aging man and asked him to name an apprentice to replace him after his death. Bole introduced a man called Gao Jiufang, who was asked to find the perfect horse to prove his worth.
Three months later, Gao returned with a horse. When the duke asked what kind of horse it was, Gao answered it was a yellow mare. But as the duke set eyes on the horse, he quickly went into a rage because the horse Gao had led to court was in fact a black stallion. The duke scolded Bole for recommending a man who could not differentiate neither the color nor sex of a horse.
But the wise old Bole simply smiled and exclaimed his appreciation for his apprentice’s abilities. “Even I wasn’t aware of this man’s great skill. His talent exceeds my own.”
Bole went on to explain that a true judge of horses doesn’t care about the appearance of the coat or skin, but sees only the nature and capacity of the animal.
“Under the coarse coat of the horse lies the essence. Gao sees what he sees and forgets what he does not see.” Indeed, the horse that Gao had brought to the duke proved to be the best on earth.
The tale is a parable from a Taoist text called “Liezi,” written by the philosopher Lie Yukou, that warns against a preoccupation with appearances as it can hide what’s underneath, which might well be the essence or the truth.
Pork has once again set the finance minister’s teeth on edge at a recent National Assembly subcommittee meeting.
Finance Minister Yoon Jeung-hyun was bawled out by lawmakers because he did not know how much samgyeopsal (pork belly strips) cost these days, a similar situation his predecessor Kang Man-soo found himself in when he was asked the price of the popular pork cut.
Not knowing meat prices should not mean a minister is incompetent and unqualified. A finance minister is supposed to be an expert on the Korean economy, not a butcher.
Really, lawmakers should raise the standard of their questioning. They should not smirk just because they ask a question that a minister cannot answer correctly.
What they should do is conjure up serious questions that will force government officials to go study the essence of the problems facing our economy.

The writer is an editorial writer for the JoongAng Ilbo.