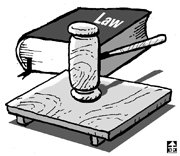 Republican Ted Poe, a three-term lawmaker in the United States House of Representatives, was regarded as something of a celebrity judge. He served for 30 years in the district court in Houston, Texas, and became well known for handing down “poetic justice” sentences.

He sentenced, for example, thieves to stand in front of stores from which they stole, carrying signs reading, “I am a thief.” He also ordered a violent husband to publicly apologize to his wife in front of Houston’s City Hall. His intention was to shame offenders so that they would not think of committing a crime again.

Similar sentencing sprang up as Poe gained national prominence. A Texas judge ordered a father who abused his child to choose between staying in a doghouse or going to jail for 30 days. A cocaine user in Georgia was required to lie in a coffin in his house and reflect on the horrible results of drug abuse.

These decisions were welcomed by many, but also received harsh criticism. Such sentences were possible due to the unique characteristics of the U.S. court system, which gives judges considerable discretion.

According to analysis conducted during the 1940s from a realist perspective, legal philosopher Jerome Frank explained a trial procedure based on the equation “S × P = D.” He argued that various stimuli and judges’ personalities affect court decisions. These stimuli can include the tone of the media coverage, a judge’s feeling at the time of the trial, as well as laws and evidence. Distrust is deeply rooted in the common belief that rulings might vary depending on the trial judge.

Recently, Korean society has realized the growing influence a judge’s unique personality can have when deliberating important decisions. The recent national workshop for judges held by the Supreme Court was prompted by the allegations that Supreme Court Justice Shin Young-cheol had improperly influenced judges under his authority. However the fundamental cause could be attributed to the ever-growing gap in legal interpretation and the values of judges.

A nationwide effort to improve the courts, such as fostering better communication within the judiciary, is a welcome sign. However, what is more important is to further reflect on the meaning of “conscience,” when one gives a ruling according to law and the Constitution.

A judge’s conscience should be that of a professional, rather than an amateur’s. It is necessary to question whether one’s interpretation of statutes is correct, what different conclusions another judge might reach, and what influences one’s ruling might have on society. Such careful consideration will help people’s trust in the judiciary to take root.