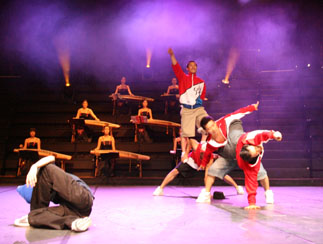 “WE-ON: Men of Strings” was a smooth mix of b-boys and the gayageum. Provided by the organizer

Korean B-boys have been paired with partners as perplexing as ballerinas and ice skaters, even an orchestra, as a way to spice up an older genre or create a new one.

This time around, a group of spinning and tumbling B-boys was paired with a group of prim ladies who pluck the gayageum, a traditional Korean string instrument, at a performance entitled “WE-ON: Men of Strings.” WE-ON stands for west & east and old & new. This experimental project opened May 2 and closes today.

This is not the first time the B-boys have mixed it up with the gayageum players. Their first gig was a 2007 TV commercial, in which the boys worked it out to the strains of Johann Pachelbel’s Canon in D Major. WE-ON: Men of Strings stretches that 10-second TV commercial into a 50-minute show.

“[The show] will be developed into a full-length performance targeted at global audiences sometime in the near future,” said Hwang Kyung-seok, the manager of the award-winning B-boy group Last for One, which is part of the performance.

In this performance, Last for One and the Sookmyung Gayageum Orchestra smoothly blended two starkly different genres. The boys showed a softer side as they danced to the slow and lyrical gayageum melodies, while the Sookmyung Gayageum Orchestra coaxed some new sounds out of their stringed instruments. The diverse repertoire ranged from Korean trot singer Jang Yoon-jeong’s “Kkot,” or Flower, to Frank Sinatra’s “My Way.”

“I thought it would be weird to see B-boys and gayageum performers on the same stage, but I was totally wrong. They’ve proven Korea has the potential to enchant world audiences,” said Cho Hyun-seok, who attended the May 3 performance.