[Talk of the town]
Farewell, my darling, I’m off to serve my country 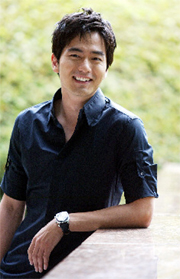 Lee Jin-wook bid farewell to his fans and long-term girlfriend as he went off for mandatory military service this Wednesday. The 28-year-old actor, who postponed enlistment last year because he was appearing in SBS-TV’s “City of Glass,” waved to 100 well-wishing supporters at the 306th draft in Uijeongbu, Gyeonggi.

Many were hoping Choi Ji-woo, Lee’s girlfriend of two years, would show up at Uijeongbu to say goodbye, but the actress was nowhere to be seen.

Lee will serve for two years, leaving fans, and presumably Choi, anticipating his return in 2011.