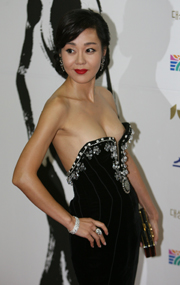 Kim Yun-jin, star of the hit TV series “Lost,” was appointed as the goodwill ambassador for the Korea Content Agency yesterday.

A division under the Ministry of Culture and Tourism, the Agency held a grand opening on Thursday at the Culture Contents Center in Mapo, northwestern Seoul.