Off to wonderland on a not-unbirthday

Off to wonderland on a not-unbirthday 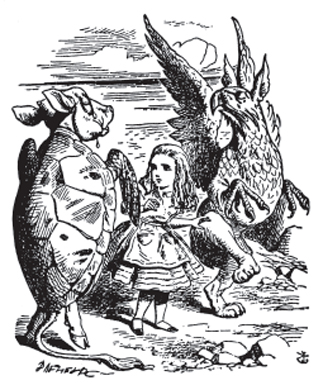 May 4, which was last Monday this year, is a special day for children’s book fans worldwide. It is the day Alice, running after the White Rabbit, fell down the rabbit hole that led to Wonderland. There, she joined a “mad tea party” with the Hatter and the March Hare (figure 2) and played a crazy croquet game with the Queen of Hearts.

When this strange story about a parallel world where “we’re all mad” - as the Cheshire Cat told Alice - was published in 1865, it was given an enthusiastic reception from the children of the Victorian Era, who had been yawning over boring children’s books full of morals.

The book “Alice’s Adventures in Wonderland” was written by Lewis Carroll (1832-1898), a mathematician and logician at Christ Church, a college of the University of Oxford, whose real name was Charles L. Dodgson. With his eccentric ideas and humorous nonsense, his story has been inspiring and charming artists and scientists so far for over a century.

Salvador Dali, the Spanish surrealist, made a grotesque “Alice in Wonderland” sculpture in 1977 that depicts a girl with bouquets of roses for hands flipping a jumprope over her head. Martin Gardner, an American mathematician, wrote “The Annotated Alice” (first published in 1960), with detailed annotations for the many jokes in “Alice in Wonderland” that may be difficult for people of our time, especially those outside England, to understand.

Filmmakers are no different. The Hollywood sci-fi hit of the late 1990s, “The Matrix,” began with the hero, Neo, reading the words “Follow the White Rabbit” on his computer. 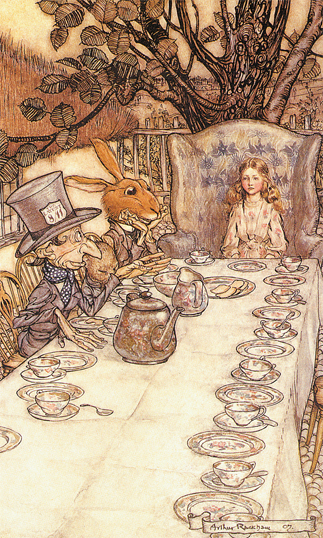 2. Latter-day wonderlands, Even the renowned illustrator Arthur Rackham, in his drawing of the mad tea party from 1907, could not escape Tenniel’s influence.

“Alice in Wonderland” is one of the most influential literary works ever written. But how do you imagine the heroine of this influential story? Perhaps most see Alice as a little girl with long blonde hair in blue dress, a white pinafore, white stockings and black shoes. This image most likely comes for many from the 1951 animated film by Walt Disney (figure 4). But even before the movie adaptation, most illustrations for the story depicted Alice as a girl with long blonde hair in a dress and stockings.

The actual model for the main character of “Alice in Wonderland,” Alice Liddell (1852-1934), was quite different, with bobbed dark hair (figure 3). Alice was the daughter of Henry Liddell, dean of Christ Church, where Carroll was teaching mathematics. “Alice in Wonderland” originated from the impromptu story that Carroll made up to entertain Alice and her sisters during a boat ride on a fine summer day. The primly bobbed hair of the “real” Alice in the old photo, with her dark and sparkling eyes, is perhaps even more charming than the long blonde hair of the fictional Alice in many book illustrations. This might be one of the reasons Carroll loved her so much.

Carroll enjoyed making friends with little girls including Liddell, according to his biographies. And he remained single for all his life. This has led some people suspect he had a Lolita complex. But Carroll was never improper, according to the girls themselves and others near him. Instead he liked playing the original games and puzzles that he designed with them. 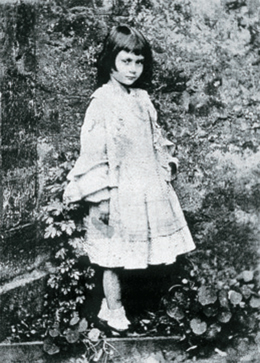 3. The real girl, Alice Liddell inspired the main character in “Alice in Wonderland.”

Alice Liddell was the dearest to Carroll of his little friends, according to his biographies. His affection for this girl was stronger than a normal grown-up’s love for a child, but it had no sexual aspects, making it odd and unique, according to Martin Gardener. And the date May 4 also shows how much Carroll loved Alice, since the day the protagonist of “Alice in Wonderland” fell down the rabbit hole that led to Wonderland also happens to be Alice Liddell’s birthday.

Then why do we imagine Alice as a girl with long blonde hair, even though the real Alice had bobbed, dark hair? This fixed image originates from the illustrations in the first edition of “Alice in Wonderland” by John Tenniel (1820-1914), an English illustrator. One of his illustrations (figure 1) shows that even the famous Disney animated film followed Tenniel in its Alice design.

Before illustrating “Alice in Wonderland,” Tenniel had drawn many topical cartoons and caricatures for Punch, the renowned satirical weekly magazine. The talent for parody and black humors he developed through these cartoons was a great resource when he was called upon to illustrate a story filled with jokes, social commentary and nonsensical characters.

One example is the illustration (figure 1) of the scene where Alice meets the Mock Turtle.

Tenniel succeeded in completing this joke by granting tangible form to this imaginary creation. He described it as a grotesque animal with the head and tail of a calf and the shell of a turtle. 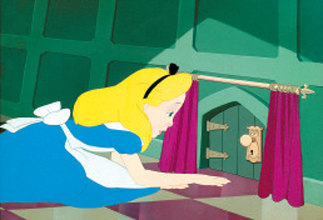 In general, the illustrations of the first edition of a classic book are forgotten to readers of later ages, as new illustrations befitting its timeless status replace them.

But Tenniel’s Alice in Wonderland illustrations still have vital power, with more recent artists heavily influenced by his imagery.

Even the illustrations by Arthur Rackham (1867-1939), an Englishman who is regarded as one of the greatest illustrators of children’s books in history, are based on the illustrations of Tenniel, in his depiction of the mad tea party (figure 2), the Mock Turtle and others.