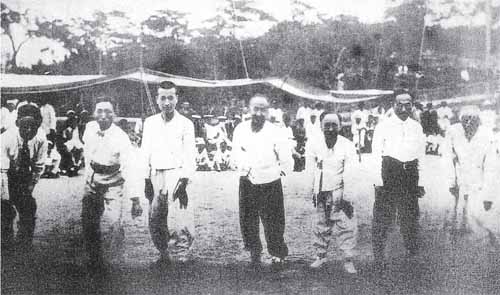 Sports leaders participate in an event organized by the YMCA in 1921. The historian Lee In-young is second from the left, the pastor Hong Byeong-seon is third from the left and the politician Yun Chi-ho is centre. The person on the far right is YMCA official Lee Sang-jae. [JoongAng Ilbo]

In a Korean film released in 2002 called “YMCA Yagudan [YMCA Baseball Team],” the main character Ho-chang studied hard for a state exam because he wanted to become an amhaengeosa, a civil servant responsible for keeping an eye on corrupt officials.

But the exam was abolished in the late 19th century, leaving Ho-chang. played by Song Gang-ho, with no purpose in life. Disappointed, he spent his time kicking around a ball made from a pig’s bladder.

One day, he booted the ball over a fence and when he jumped over to retrieve it, he saw a strange sight: foreign missionaries wearing big gloves throwing balls back and forth to each other. They were playing baseball, and Ho-chang was seeing the game for the first time.

The movie is set during the early 20th century when Korea began to absorb Western culture, including sports. 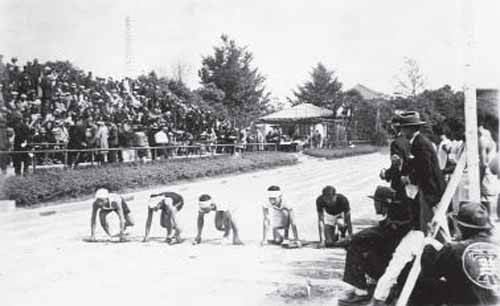 Sprinters prepare for a race in 1905. [JoongAng Ilbo]

In the film, the YMCA baseball team gets recruited without regard to the players’ social status, and their teamwork is terrible. An aristocrat in the team refuses to catch a ball thrown by a commoner. In the end, the inexperienced YMCA team beats their opponents from Japan.

The film is fiction but a large part is based on the historical fact that the YMCA played a major role bringing organized team sports into the country.

To commemorate the beginning of the Christian institution’s arrival in Korea over 100 years ago, a book on the YMCA’s contribution to the development of modern sports here will be published next month.

In addition, there will also be an exhibition of sports-related photos from the early part of the 20th century next month, too.

The Korea branch of the YMCA was founded on Oct. 28, 1903. In 1899, 150 young Korean men had spoken of the need for a Korean branch at the World Alliance of YMCAs. Four years later, the dream became a reality.

“At the time, Korean people were unfamiliar with Western sports,” said Kim Jae-woo, a professor of physical education at Chung-Ang University and the author of the book about the YMCA and sports in Korea.

“At that time, only a small number of missionary schools offered physical education such as gymnastics, athletics and sometimes football [soccer],” said Kim, adding Koreans didn’t even know that much about exercise in general.

The Korea YMCA played a major role in introducing baseball, basketball, gymnastics, swimming, ping-pong and skating in Korea. Baseball was introduced in 1905, followed by basketball in 1907 and skating in 1908. It held ping-pong and other sporting events in a temporary building in front of its Seoul headquarters, and in 1916, it opened the country’s first indoor stadium.

The YMCA, however, was not the only group to promote sports in Korea toward the end of the Joseon Dynasty (1392-1910).

Ok Gwang, a professor specializing in physical education at Chungbuk National University, says in the book “The Transformation of Modern Korean Sport” in 2007 that Christian missionary schools and foreign language schools were also keen to encourage their students to pursue sports activities.

Ok points out that indigenous Korean sports existed prior to the arrival of modern Western games, but they were principally used to train military personnel rather than to entertain.

“[But] these activities had lost their force by the19th century,” the professor writes in the book, leaving a space for Western missionaries and teachers to fill with different games and exercise activities.

The athletes that trained at the YMCA often later taught sports at schools. “The YMCA not only popularized sports in the country but also trained a number of sports leaders,” said Lee Jeong-hoon, a Seoul YMCA official.

The Christian institution was founded for the first time in London in 1844 originally to instill Christian principles among young people and prepare them for missionary work.

So why did the YMCA try to encourage sports?

It all goes back to the Bible: many Christian missionaries believed in the general notion of a “sound soul in a sound body,” an idea that strongly influenced Luther Gulick, an American physical education instructor and the head of the physical education department at the YMCA Training School in Springfield, Massachusetts, in the late 19th century. Gulick later persuaded a young instructor named James Naismith to create an indoor game that could be played during the off-season. Thus basketball was born.

Unlike its original intention, in Korea, sports and physical education were used to train leaders for the country’s fight for independence.

“If there are 100 strong men, there is no need to worry about the country’s defense,” Lee Sang-jae, an official of the Korea YMCA said in 1909. Lee, nicknamed the “eternal young man” for his boundless energy, also believed in the mantra that sports could build a sound body and soul among young Koreans.

The development of sports in the early 20th century was strongly related to resistance against Japan’s colonial rule over Korea (1910-1945), evident in the fighting spirit of the Koreans in the 2002 movie YMCA Baseball Team.

Since there was a perceived need to train Korean youngsters to fight colonialism, independence leaders stressed the importance of physical education in the schools they founded. The more Japan tried to oppress the Koreans, the stronger the spirit Koreans became.

“The YMCA is historically important as it introduced and implemented the concept of sports in Korea,” Kim said. “It not only promoted sports but also played a role in upholding the spirit of independence.”