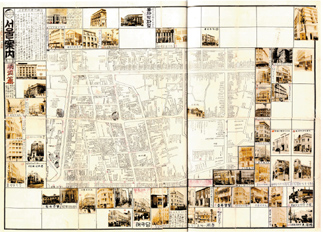 A map of Myeong-dong produced in 1961 by Korea Guides Service. [JoongAng Ilbo]

Where’s the hippest place in Seoul to head for high fashion, cultural perks, the latest financial news updates, political debate or just to hang out with friends?

The answer could be multiple places like Apgujeong, Daehangno, Yeouido or Sinchon but way back during the Japanese colonial era until the 1970s, it was Myeong-dong.

Myeong-dong in central Seoul is currently home to stores of moderately priced fashion goods, accessories, makeup and food, making it an irresistible place for tourists and youngsters. The crowded streets and the loud cries of merchants in various languages highlight the distinct flavor of Myeong-dong. And because of the strength of the yen against the won, you cannot turn a corner without bumping into tourists from Japan.

The director of the Myeong-dong Community for Advancement of Commerce comments, Lee Dong-hee, said, “The real challenge is getting people in their 30 and 40s here.”

Despite the apparent large number of transactions, many old-timers who saw Myeong-dong at its peak are mildly dissatisfied.

“Myeong-dong was where you could get low-cost clothing, shoes and makeup in the 10,000 won ($8.08) to 20,000 won range, but up until the 1970s, it was where celebrities and high-level officials came to check out the latest trends,” said the honorary president of the Myeongdong Community for Advancement of Commerce, Kim Jang-wan. 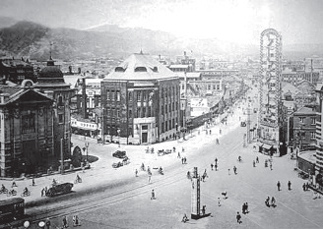 Myeong-dong during Japan’s colonial period, with the Bank of Korea pictured far left, the Choson Commercial Bank in the center and the Post Office on the far right.

How did a residential area during the late Joseon Dynasty (1392-1910) become a street focusing on Japanese culture?

Following the annexation of Korea in 1910, Japanese people started to move in and Myeong-dong became their main playground.

A Japanese reporter for a magazine called “Modern Japan and Joseon 1940” wrote an article titled “An Investigation of Gyeongseong’s Busy Streets” that said, “When people want to rendez-vous at Bonjeong after hanging out in Jongno, they use the phrase ‘Let’s cross the river.’”

This shows the apparent distinction of the two neighborhoods during those times. 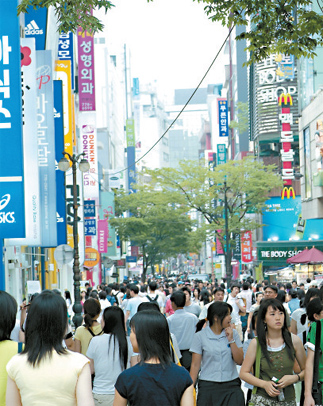 Under the influence of Japan, Western culture began to drift into Korea, as the Japanese had been more open to the ways of the West than the Koreans up until that point.

An example of this would be the first department store in Korea. In 1930. Mitsukoshi, now the Shinsegae Department Store, opened.

Along with the new form of consumerism via mega shopping centers, it was only natural for financial services to prosper in this region as well. The building across from the Metro Hotel became the Gyeongseong Stock Market, which changed its name to the Korea Stock Exchange after independence. Until 1979 when the stock exchange moved to Yeouido, Myeong-dong was unquestionably Korea’s Wall Street.

With the stock market situated in Myeong-dong, a cluster of banks sprang up. Centering around the Bank of Korea, many commercial banks such as Korea Exchange Bank, Woori Bank, the Industrial Bank of Korea, Hana Bank and more based their headquarters in the area. A number of banks still operate their main offices here.

Jung Yeon-geun, the president of KB Data System recalls, “It was convenient to be near the Bank of Korea for business meetings and fund transactions.”

Most interestingly, even though most of the stocks sold were for Japanese industries, the person who accumulated the most wealth was Korean. Cho June-ho established Dong Ah Jeunggwan, which translates as Dong A Securities, in 1934 and recorded assets worth 300,000 won, which would be 300 billion won in today’s money.

“Myeong-dong was where money and people gathered from the late Joseon times since transportation ran in all four directions,” says Choi Yon-geun, the president of Interbill, a company that provides private loans.

As Choi notes, Myeong-dong attracted many types of people, including artists. The main stage that embraced them was Myeongchijwa, which changed its name to Sigongkwan, meaning community theater. After the Korean War (1950-1953), the ruins of the National Theater of Korea merged with Sigongkwan making Myeong-dong the center for film and theater arts.

Countless operas, dance performance, and concerts were held in this historical place. Most notable were “La Traviata” in 1948, “Hamlet” in 1949 and the first ever Miss Korea competition in 1957.

Simultaneously, a place for performers and writers to debate and gossip developed in this area. 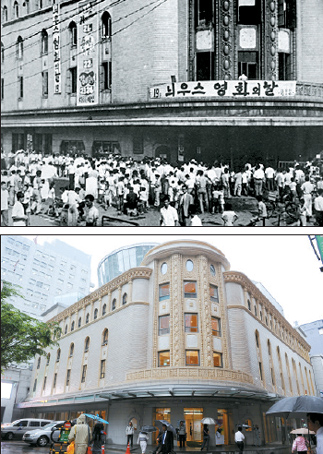 Above: The theater once called Myeongchijwa.Bottom: The renovated theater is due to hold its first performances next month.

A novel written by Kim Si-chul paints a picture of the scene: “A tiny coffeehouse named Dongbang Salon, thick with cigarette smoke and the smell of alcohol, was the refuge for poets, writers, critics, directors, musicians, journalists, publishers, cartoonists and more.”

Even after the National Theater of Korea moved to Namsan in 1973, theater remained alive in the neighborhood for some time. Artists quenched their thirst for the stage at small- to medium-sized theaters.

“Actors wanted to perform anywhere they could,” says Ku Hee-seo, a theater critic.

Although the passion for theater died out, the opening of the Myeong-dong Theater next month could herald a rebirth.

In addition, the noisy crowds in Myeong-dong made it a tempting spot for politics. Before the establishment of the National Assembly in Yeouido in the 1970s, the Buminkwan, which is now the Seoul Metropolitan Council, was the center of Korean politics.

Fashion designer Noh Ra-no, who owned a boutique in Myeong-dong back then, recalls an encounter with Kim Doo-hwan, a renowned gangster and assemblyman. “Even when he didn’t know me, he said he would make me the ambassador to France when he became president.”

It was also the center for Korea’s democratization movement. Myeongdong Cathedral was upheld as the symbol of democracy as Cardinal Stephen Kim Sou-hwan blocked an army of police officers from barging into Myeong-dong and helped the investigation into the torture and murder of Park Jong-chul, a participator in the democracy movement.

No one would argue that Myeong-dong played an important, if not vital, role back then, but now the question is will it be able to revive its societal and cultural importance?

“We hope we can turn Myeong-dong, the mother of commerce and culture in Korea, into a worldwide brand,” said Jung Dong-il, the major of Jung District.

With the first performance at the Myeong-dong Theatre next month following its opening on May 11, Jung hopes to reignite the arts.

“Because much of the infrastructure that existed during Myeong-dong’s golden age for the arts was destroyed, a cultural deindustrialization seems to have taken place,” Jung states. “I feel that development in culture would be the true way to see real advancement in Myeong-dong.”

In addition to the Myeongdong Theatre, many plans such as the construction of a cable car from Myeong-dong to Mount Namsan are in the works.