A thrilling tale told by a master filmmaker

A thrilling tale told by a master filmmaker 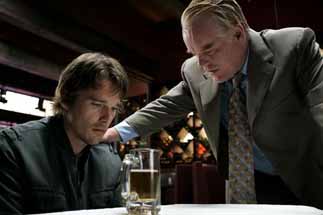 At 25, it’s difficult for me to imagine anyone doing one thing for 50 years. That Lumet has been able to continue producing such sophisticated, compelling films - among them icons of American culture like “Dog Day Afternoon,” “Fail-Safe” and “Network” - for so long is a feat matched by very few of his peers. Even the career of Akira Kurosawa just barely made it to five decades.

Like Kurosawa in his dramas set in the present day, Lumet seems driven by a physical need to make films about human flaws, many about underdogs fighting for a righteous cause against an indifferent bureaucracy. But in his latest, Lumet turns to the other side of the law, following the self-destruction of a family turned criminal by cruelty and egotism.

The film opens with a robbery. A man in a mask holds up a jewelry store. The little old lady on duty pulls a gun on him and shoots him to death before succumbing to her own wounds. The nervous accomplice in the getaway car speeds off.

The film then expands forward and back from this pivotal moment, revealing from the perspectives of the different characters that the man in the car, Hank (Ethan Hawke), is in fact the son of the dead woman, put up to the robbery by his brother Andy (Philip Seymour Hoffman). Their father Charles (Albert Finney) sets out to find the accomplice, while Hank continues to hide his affair with Andy’s wife.

Each character has his own justifications and obsessions, and no one is entirely innocent. Lumet slowly unravels the background like an omniscient prosecutor making his closing argument.

Lumet is known as an “actor’s director,” and the performances here are nothing short of brilliant. Hoffman in particular renders his reprehensible character fascinating and sympathetic.

Devil only earned $25 million worldwide during its initial run, a great injustice for such a tightly made, intelligent thriller. Fortunately, nothing can stop Sidney Lumet, who already has another film in the works for this year.

Before the Devil Knows You’re Dead