The compass loses its east and west

The compass loses its east and west 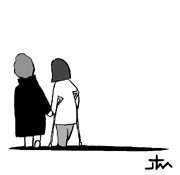 One spring day in 2007, the artist Kim Jom-son learned that she had advanced-stage ovarian cancer. After receiving the diagnosis, she immediately sent a text message to her close friend, Chang Young-hee, a writer and English literature professor at Sogang University. “Congrats. It’s cancer,” the message read.

It turned out Chang had practically forced her friend Kim to have the check-up. The two fought the vicious illness together, and when their time came, bid farewell to this world one after the other. Only 49 days after Kim’s death, Chang closed her eyes for the last time two Saturdays ago after a brave fight against spinal cancer.

The two first met six or seven years ago at a dinner party hosted by pianist Shin Soo-jung. Despite stark differences in features and disposition, the two artists recognized each other as soulmates.

Chang, though delicate and sensitive, was a true fighter disciplined by physical pain and determination. Kim, with her sharp eyes and aggressive expression, was a softy at heart.

It wasn’t just their mutual respect, but the endless fun that kept the two inseparable. Together, their giggles never ceased. They never ran out of things to talk about. The two published “Gift” and “Blessing,” collections of Chang’s favorite English poems paired with Kim’s brilliant illustrations. They created works of passion and inspiration together.

Even ruthless cancer failed to mar their humor, passion, hope and ability to see bliss in life. Chang retold how she burst into giggles when her American anesthesiologist attempted to count from one to three in broken Korean to ease her anxiety on the operating table during her first cancer surgery in the United States in 2001.

Author Park Wan-suh once told Kim, “Never in my life have I met such a chirpy cancer patient,” advising that a bit of pessimism might even do her some good. Even in their hospital beds, Chang and Kim constantly mapped out their futures. Chang focused on squeezing out the final touches on her last book even as her consciousness drifted away.

A couple of years back, Chang had confided to Kim that she never closed her eyes in order to fall asleep. Kim warmly responded, “You’ve lived all your life as a compressed file.”

“He was my North, my South, my East and West,” starts W.H. Auden’s “Funeral Blues,” a favorite poem of the two remarkable women.

Shin, the pianist who formed a trio with Chang and Kim, is now left without her East and West. But she has swallowed her grief and managed a mild smile as she said: “Still, I was blessed and fortunate. At least I had both of them as friends.”

The writer is deputy economic news editor of the JoongAng Ilbo.