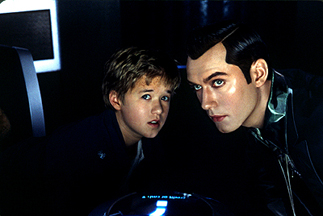 “What will robots that serve humans in our daily life in the future look like?” That is one of the most frequent questions I am asked as a robotics scientist.

The 2001 movie “A.I.,” directed by Steven Spielberg, offers an answer to that question based on a rich imagination. Robots in the movie not only carry out monotonous menial tasks that humans would otherwise have to do. They also satisfy humans’ sexual desires, and even replace children who have gone missing.

The robot called David, the main character, even has the same emotions that humans feel. He thinks seriously about his identity, in between human and machine.

For robots to carry out the tasks humans must do in daily life, such as washing dishes in the kitchen or playing cards with the grandparents, it is only natural to design them to have a human structure and shape. That is because our homes and offices are designed to best suit humans’ physical structure. But there is something even more important than shape in making a true android - a human robot.

We humans have differentiated ourselves from other creatures, in a place superior to other animals. We have given ourselves this arrogant place because our fingers have a dexterity that other species lack and because our brains can learn and think at a much higher level.

For instance, the fingers of a young pianist playing Chopin’s “Fantasie Impromptu” are awe-inspiring. The most basic function that enabled humans to achieve the incredible developments in science and technology we enjoy today is the ability to perform such delicate and subtle movements.

For a robot to have these functions a technical revolution is required, and that cannot be achieved in the short term. But what is most difficult for robots to mimic about humans is humans’ ability to learn.

The essence of what enables children to acquire language, perceive objects and develop their own intelligence is still unknown. For decades, intelligence scientists have tried to analyze the human brain’s mechanisms, but they have given up. The closer scientists approach the center of the question, the more difficult it gets to understand the phenomenon with humans’ mechanical yardsticks.

Before the two problems are solved, it will not be meaningful or practical to create a robot with a human shape, unless its functions - such as playing at a concert or working as a guide - require it. We do not have the technology to produce a robot that can meet users’ multiple demands all at the same time.

Therefore, robots that will be used in our daily life will most certainly look differently according to their functions and usages, instead of looking like humans. Robots that do the dishes or robots that teach children will likely dominate the market for robots for use in daily life for decades to come.

Years ago, I visited the Xerox Palo Alto Research Center. On one of the walls inside the building hung a photo of Mark Weiser (1952?1999), the father of ubiquitous computing, and beside that photo hung the famous question as to why humans have to turn to computers.

I’d like to answer his question like this: “Don’t worry, Mr. Weiser. In the future, robots of various shapes that work in every home will come to humans.”