A phone call away from suicide

A phone call away from suicide 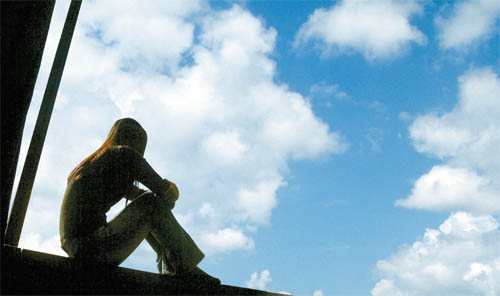 The caller says he’s going to jump. He’s borrowed money from his parents but lost it on a sports lottery.

He’s even borrowed money from a loan shark, but hasn’t been able to pay them back. He says he’s ashamed and doesn’t want to ask his parents again for money.

Han Seung-cheol, 30, a mental health nurse working the lines at the center, takes the call. He tells the caller that suicide is not the best solution and that although his parents might be angry with him for losing the money, they would never want him dead.

After a long talk on the phone, the caller relaxes and agrees to let Han and another counselor meet him. He’s near Dongjak Bridge on the Han River in Seoul. Han contacts the caller’s parents in the Gyeongsang region and they later come to collect him.

“First, we try to assess the risk of the caller taking their own life,” Han said. “We ask specifically whether they have thought about suicide and then we decide whether to take immediate action.”

As soon as the call comes in, the caller’s phone number appears on the screen. If it is an emergency, they use the number to trace the caller.

“There are moments when we need to make `decisions instantly,” said Son Ki-hwa, a mental health social worker at the center.

The center provides a 24-hour suicide prevention hotline (1577-0199). Private organizations have run similar hotlines in the past, but this is the first in Korea to employ professional counselors. Four nurses and seven social workers are on standby.

The center was originally a crisis intervention team at the Seoul Mental Health Center set up in 2005 and funded by the city of Seoul. But the alarming increase in the suicide rate in Korea prompted the team to establish a hotline for the Seoul metropolitan area. 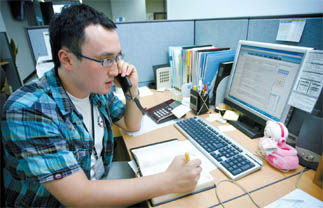 Just a glance at the statistics suggests the need for such a hotline. Korea’s suicide rate rose to a new high in 2007, at 24.8 per 100,000 people, from 13.6 in 2000, according to the National Statistical Office. The country has the highest suicide rate of all Organization for Economic Cooperation and Development countries, according to OECD health data released in 2006.

Not surprisingly, with the ongoing economic turbulence there has been a rise in calls to the center, Han said. The number of calls rose to 1,400 a month this year from 1,000 a month last year. The center takes 40 to 50 calls a day, predominantly from people in their 20s and 30s.


Not just a phone call

Unlike other hotlines, the Seoul Suicide Prevention Center does follow-up work on callers. “The existing suicide hotlines [in Korea] are volunteer-based,” Son said. “[But] we don’t just take calls. We also go out and meet callers. We are trained to assess the caller’s mental health and see whether he or she has psychological problems.”

After receiving a suicide-related call, the counselors frequently check on the caller, as long as the caller gives permission.

This monitoring period can last up to six months, and when the counselors decide that a caller is now unlikely to take his or her life, they refer the caller to a district mental health center.

The center also closely works with police and firefighters. When there is an emergency, they, assisted by police or firefighters, rush to the caller who poses a suicide risk. The police also call the center for help when they find a person who needs psychological help.

The nurses and social workers at the center are experienced mental health practitioners.

The entrance to the center in Nonhyeon-dong, Gangnam District, southern Seoul. By Oh Sang-min

They also continue to train at the center under the guidance of Lee Myung-soo, 40, a psychiatrist and the director of the Seoul Mental Health Center, and two other psychiatrists.

Every morning they listen to calls that have been recorded and talk about how to respond in certain circumstances.

As part of the training, they also have to support each other.

Last year, a man tried to take his own life in a mountain region. Jung Hee-young, 30, a mental health nurse at the center, alerted the police and they reached him in time. But after the man was released from hospital, he tried to kill himself again and this time he succeeded.

“It can be very traumatic for the person handling the case if the person who calls us actually takes his own life,” Lee said.

Jung said she felt responsible at the time of the caller’s death. “I felt that if I had tried a little more, I could have saved him,” Jung said.

“There is always a risk of a second suicide attempt after the caller is released from hospital. I can’t stop every suicide but I wish could have stopped that one. It took a while to get over it.”

For the counselors, it’s not just a job. They say they learn a lot about the value of life through their talks with the callers. “The thought of taking your own life might cross people’s minds. People could think about taking his or her life once in a lifetime if they get into difficulties but not everybody actually tries,” Han said. 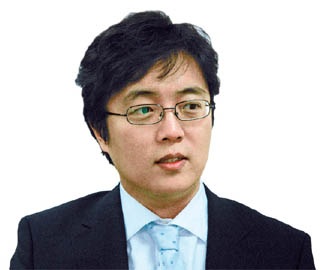 Lee Myung-soo, a psychiatrist, is the director of the Seoul Suicide Prevention Center. [JoongAng Ilbo]

Lee Myung-soo, 40, a psychiatrist and the director of the Seoul Mental Health Center, said suicide can be prevented if the media do not report suicide cases as much.

With the suicide of the late President Roh Moo-hyun, Lee was worried about the so-called Werther effect, referring to copycat suicides after a person considered a role model or socially influential takes his life.

“Suicide is contagious,” Lee said. “Roh was a very influential person and his death is likely to affect many people, especially those who shared his ideology.”

Lee’s concern is that more people might think of suicide as a way of running away from problems. “If the media do not report suicide, the number of suicides would drop.”

Another worry is that the number of suicides in Korea might be a lot higher.

“There are quite a few deaths of undetermined cause. Suicide may account for many of the undetermined deaths,”

Lee said, explaining that suicide carries a huge social stigma, which might compel family members to hush up the real cause of death.

Lee said no matter how hard the counselors try, they cannot prevent every suicide.

It is very difficult to stop someone if he or she has decided on a course of action, Lee said.

Suicides by the elderly often come under this category. According to the National Statistical Office, the suicide rate of men and women over 60 was the highest, at 30.3 per 100,000 among all age groups between 2002 and 2006. The suicide rate among seniors is also rising fast.

What the center can prevent are suicide attempts caused by depression or impulsive attempts, Lee said.

“People call and talk about their problems while we carefully listen to them. Some even thank us before they hang up.”