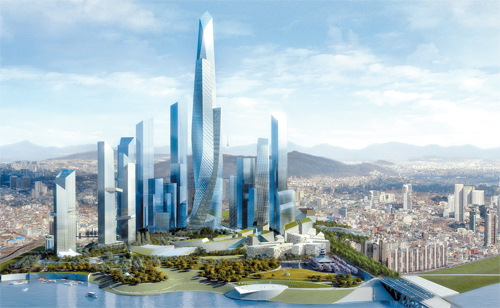 Computer rendering of how Yongsan could look after the redevelopment project. Provided by Yongsan Development Co.

Yongsan District is one of the last remaining tracts of major real estate not yet developed in Seoul, but that is set to change as plans for transforming the area into an international business hub take shape.

Polish-born New York-based architect Daniel Libeskind, 63, said in a press conference last week that his development project for the area just north of the Han River, principally focused on Yongsan Station, will show how a city can plan in a historical and collaborative way.

Libeskind flew into Seoul to talk about his designs at the 2009 Seoul Digital Forum on May 27 and 28. His project “Yongsan Dreamhub” was chosen in April as the master plan for the development project.

The development was modeled after the business district La Defense in Paris and the integrated mega-complex Roppongi Hills in Tokyo.

“[The aim] is to build a global business center with international status,” said Han Yoo-seog, deputy director of Seoul’s urban planning division. “So we invited architects from around the world to submit their plans.” 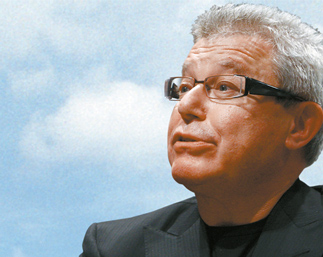 Yongsan has long been a crucial area within the capital. Its proximity to the Han River made it strategically important during times of war, and in the 13th century, the Mongolian army used the area as a shipping base.

During the Joseon Dynasty (1392- 1910), the area was not yet part of the capital. Instead, there was a port, and in the late 19th century, steamboats used to travel between Incheon and Yongsan.

It’s no surprise, then, that Yongsan has been occupied by a series of overseas armies. In 1892, the army of the Qing Dynasty stationed 3,000 soldiers there. After the Russo-Japanese War (1904-1905), Japan built the train station and a military base as the area was close to both central Seoul and the Han River.

After Korea’s liberation from Japan in 1945, the U.S. military took over Yongsan, establishing a military base that covers 16 percent of the district’s land.

The irony is that the development of Yongsan has been held up because it has been such a strategically important transportation hub. 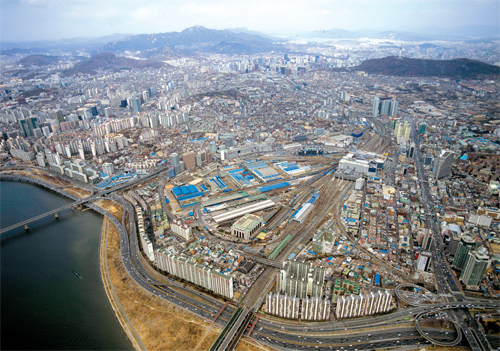 According to Hong Seong-ju, professor at Sangji University, few countries in the world host a military base for a foreign power in the middle of the country’s capital. It wasn’t until in 2004 that Korea and the United States agreed to move the Yongsan military base to Pyeongtaek, Gyeonggi.

If the plan goes ahead as planned, the development of the 560,000-square-meter (138.4-acre) area will last from 2011 to 2016, according to the Yongsan Development Co. When the 28-trillion-won ($22.6-billion) project is completed, the main building will be the tallest in the country and the second highest behind the Burj Dubai in the United Arab Emirates, expected to be completed later this year, the company said.

Seoul wanted to build a landmark that represents the city. In July 2008, the Seoul city government and the Yongsan Development Co. decided to invite five foreign architectural companies for the competition - Studio Daniel Libeskind, Asymptote, SOM, Jerde and Foster and Partners.

New York-based Asymptote designed the World Business Center to be built in Busan, while U.S.-based SOM is responsible for the blueprint of Burj Dubai. Tokyo-based Jerde is credited with the redevelopment of Roppongi Hills in Tokyo. London-based Foster and Partners designed Hong Kong International Airport.

“The competition among different cities is heating up as much as that among countries, and in that sense, the Yongsan development is very meaningful,” said Lee Chang-moo, a professor of urban planning at Hanyang University. “In Seoul, Yongsan is one of the few places where a large development is possible.”

The Libeskind design includes a 665-meter, or 150-story-high, skyscraper surrounded by 30 buildings whose height ranges from 20 to 70 stories. A new waterfront will also be built. 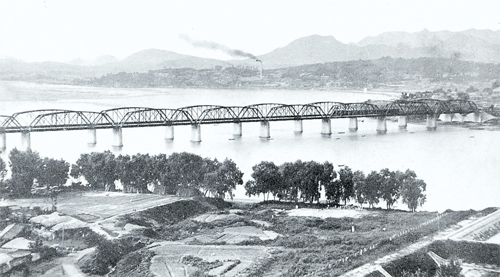 The rail bridge over the Han River, which was photographed before 1930, connects Yongsan District and southern Seoul. It was partly destroyed during the Korean War (1950-1953) but it was repaired in 1969. Provided by Seoul City Government

Libeskind said he was inspired by a crown of the Silla Dynasty (57 B.C.E. - 935 C.E.) and other cultural images. “It [the crown] is just one image. There are many other things underpinning the design,” he said. “This is not a 21st-century plan imposed by old fashion methodology and some two-dimensional drawings.

“[Yongsan] has a most spectacular location and will have a big impact to the future of the whole metropolitan area.”

Libeskind, the man behind the tower


‘Working in a democracy, you cannot be a prima donna ... you have to work with others.’

Daniel Libeskind first rose to international prominence in 1989, when he won the competition to design the Jewish Museum Berlin. Since then he has been involved in a series of major projects, including an office tower for Hyundai Development Corp. in Seoul, until being hired for the Yongsan project. He was recently interviewed by JoongAng Sunday.

A major urban redevelopment project like this one is not usually decided through an international competition, and there has been criticism that Libeskind does not know enough about Korean history or geography to build a major Seoul landmark.

But Libeskind said his nationality is not a disadvantage. “Sometimes a stranger knows much more about a place than someone who has lived there their whole life,” he said. “We live in a dynamic society. Any city needs the best talent in the world.

“We live in a globalized society, and this gets out of the notion that architecture is just a provincial undertaking,” he said. “I think we need to consider this and make sure we build unique places in the world and protect our individuality.”

Libeskind said the Yongsan project is still in the beginning stage. He also expects a lot of changes along the way, just as there have been modifications in his plan to rebuild Ground Zero in New York since he won that design competition in 2003.

In fact, there was endless conflict among stakeholders in the New York project even after he won the design rights. In his book “Breaking Ground,” published in 2005, Libeskind criticizes those involved by name.

The Jewish Museum in Berlin had similar problems, even though the design won the architect international acclaim.

“It’s true for every great project, whether it is in Berlin, New York or Seoul,” Libeskind said. “This is the nature of the great project. It’s as I said, New York has conflicts every day. You can’t just put everything on paper.”

“Working in a democracy you cannot be a prima donna. It’s not about what you know or doing it your way. You have to have a powerful idea, but you have to work with others. That’s really, I think, the solidarity that architects have to show to the project.”

Not every building is a home run. His facade on Hyundai I-Park Tower, for example, was not well received. “Architecture is like all great art. It’s never going to be immediately accepted or agreed upon. I never want to reduce architecture down to fashion,” he said.