Hunt for the lost ships of Chilcheon

Hunt for the lost ships of Chilcheon 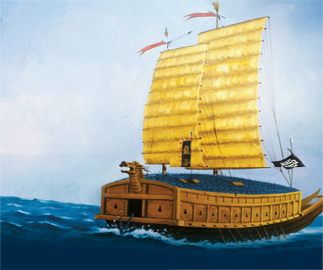 It was probably Korea’s greatest ever naval disaster.

Ten thousand Korean sailors were killed on July 16, 1597 in the seas around Chilcheon Island off the coast of South Gyeongsang when 500 Japanese warships launched a surprise attack.

Korea also lost five to seven geobukseon, or turtle ships, ironclad vessels shaped like a turtle, and 160 panokseon, another type of battleship.

It was Korea’s only recorded naval defeat during its seven-year-long war with the Japanese between 1592 and 1598.

No authentic examples of geobukseon or panokseon exist today on land. Examples in museums are all replicas. But wrecks exist underwater and explorers have undertaken expeditions to locate sunken boats from this period of history.

One such project is being organized by the Korea Under Water Development Co, but their efforts reveal just how hard it is to find sunken wrecks.

A crew of eight, including a captain, divers and researchers have been trying to excavate a geobukseon since last June. The company was invited by the South Gyeongsang provincial government to search the waters off the southern coastline of the Korean Peninsula using a 21-ton exploration ship, but by the end of their 12-month assignment, they had dredged up nothing but sludge.

“Visibility is poor because of the mud,” said one of the company’s divers, Park Dong-choon, a 19-year veteran of the seas.

The provincial government has given the company a further two months’ worth of funding to find what they’re looking for - 16th century-era boats. After that, the divers who scour the ocean floor will have to seek funds from private sponsors if they are to continue their hunt.

What’s surprising, though, is that the 400-year-old ships resting on the seabed have not rotten away.

But, as underwater artifacts specialist Park Sang-un explains, wood does not rot easily under the mud.

“The oxygen is blocked within the mud, isolating microorganisms and shellfish that eat away the wood,” he said.

Lee Jong-won, the president of Busan Diving Center who in 2006 first suggested a project to unearth geobukseon, said mud works as a refrigerator. “There have been many accounts in and outside the country of salvaging sunken wooden ships in good condition from hundreds of years ago,” Lee said.

One example is the recovery of the Swedish warship Vasa in 1961. It sank 30 meters (98.4 feet) to the bottom of the sea outside Stockholm in 1628, and was pulled out 333 years later virtually rot-free.

Another example is the wooden boat and its artifacts made hundreds of years ago hauled out of the waters off Sinan County, South Jeolla in the west sea.

The common distinction between these finds is that the sea level is low and the boats are buried in mud with low levels of salinity.

The explorers can work out how much mud covers possible wrecks by calculations based on tidal fluctuations around Chilcheon Island where the navel battle took place 400 years ago. But the problem is knowing where to start digging.

First, the team uses a “multibeam” to investigate the land and its features. The sound waves from the multibeam reflect off the seabed to create a graphic image. Then they use a side-scan sonar to develop 3D images. The sonar is attached to a nine-ton minisub that scans the seabed. The problem here is that it can’t locate anything under the mud, only objects lying on the sea floor.

Another tool in the divers’ arsenal is a special piece of equipment that shoots out high-frequency waves to see if there is something underneath the mud. It is impossible to see what exactly is there, so a magnetometer is used to see if metal is present. The geobukseon were covered in metal.

Unidentified objects have been located in around 767 locations around Chilcheon Island. The team has narrowed down the possible sites to 57 spots.

Until the end of last year, the divers were removing mud at 25 locations where the layers were less than one meter deep. They have found 41 pieces of china from the 18th to 19th centuries and three from the 16 century.

The other 32 locations are covered in over two meters of mud, making excavation very difficult.

“We used to use something called an ‘airlift’ which would suck up the mud like a vacuum cleaner,” said Choi Byung-yong, the director of diving operations with the compand. “But we use only shovels and hoes now, which is slower but causes less damage to the surrounding area.”

There are currently nine sites left to explore in the two months. After that, private groups will have to pick up the tab if the project is to continue.

“We’re not sure if we can find a geobukseon vessel,” says Kim Jong-im, the director of the geobukseon excavation project for the South Gyeongsang provincial government. “But geobukseon and panokseon certainly lay deep within the Chilcheon waters. To continue, we need time and money because the area is so big.” 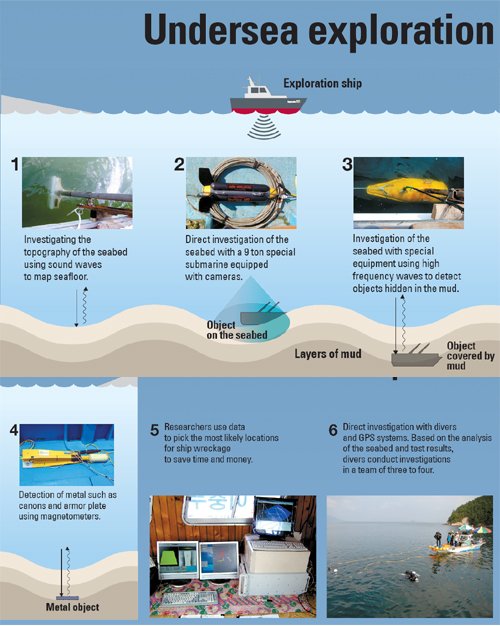 Geobukseon Excavation divisional commander Yoo Myeong-kyu said some people think we are wasting our time, but even if we only have a 1 percent chance of finding a geobukseon, it will be worth it.”