Birthday wishes fly in from around the world

Birthday wishes fly in from around the world 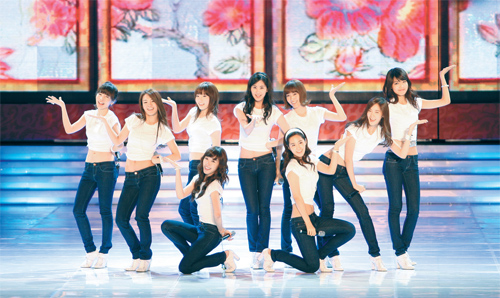 Girls’ Generation, also known as SNSD and Soshi, counts fans from Canada and Panama to the Philippines and Germany. [JoongAng Ilbo]

An eye-catching advertisement appeared in a local daily newspaper Wednesday. It was composed of messages from fans celebrating the birthday of Yoona, a member of Girls’ Generation, or SNSD, a popular Korean girl band.

It’s grown fairly common these days for fans to run ads in newspapers to commemorate their idol’s special day. Fans are willing to share the cost of such a venture and decide the design of the ad on their own.

However, there was something special about this ad - the congratulatory messages were not only in Korean, but also in many foreign languages. There was English, Chinese, German and Arabic, among others.

This “global” congratulatory note was part of an event set up by one of Yoona’s fan clubs.

Hwa Soo Eun Hwa, the name of the club, had prepared the ad for Yoona’s 20th birthday, which fell last Saturday.

The fan club said it received about 400 messages from around 30 countries in just three days after they announced on a Web site for the group’s overseas fans (http://soshified.com) that they would take in congratulatory messages for Yoona’s birthday.

Hwa Soo Eun Hwa handpicked 23 messages out of the 400 received and published them in the ad.

“SNSD is very different from American music groups where solo singers rule the industry. Their songs are also generally more adorable and clean in terms of the actual lyrics,” Karen Ling, a 17-year-old girl from Canada, said in a followup e-mail interview conducted by members of the Hwa Soo Eun Hwa fan club.

“Last year we danced to Girls Generation in a Korean school and to my surprise, some halmoni and haraboji [grandmother and grandfather in Korean, respectively] clapped and sang along. ... For music there’s no age,” she wrote.

Nico Mathias, a 24-year-old man from Germany, wondered if he would be counted among “uncle fans” of the group, a term referring to older male fans of a young girl group like SNSD.

“I became a SNSD fan because I like K-pop. I’m 24 so does that make me an ‘uncle fan’?” he asked. “People should be able to enjoy listening to any singers regardless of age,” he wrote.

Juan Cheung, a 16-year-old male fan living in Panama City, Panama, said he hadn’t been interested in Korean culture until he met Soshi, another name for the idol group. “Even though I can’t understand Korean, I’m trying my best to watch and support SNSD,” he said.

Diana Cadiatan, a 15-year-old from the Philippines, wrote: “They are nine girls, each with different talents, skills, charms and personalities, combined into one amazing group. Who wouldn’t love that?”