Flowers for a family divided

Flowers for a family divided 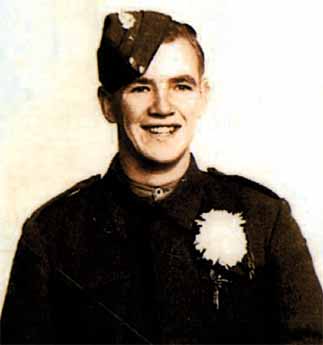 
This article is part of a special two-part series the JoongAng Daily will run today and tomorrow to commemorate the 59th anniversary of the Korean War (1950-53), which falls on June 25. In part one, we recount the moving story of British soldier James Heron and his family. Part two will shed light on the work of Korean cartoonist Kim Sung-whan, whose watercolor sketches depicting scenes from the Korean War period have recently been made public for the first time.

On the morning of June 15, a good-sized pulpy yellow envelope arrived on the desk of Park Eun-jung, the public relations director of the United Nations Memorial Cemetery in Korea in the southern part of Busan. 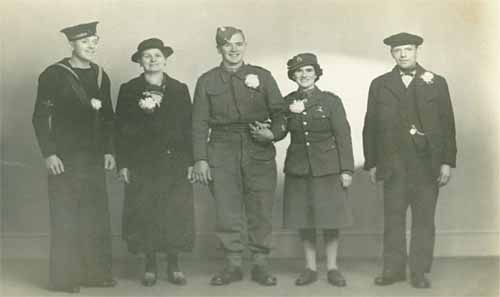 A picture of James and Ellen Heron, third and fourth from left, on their wedding day.

It was sent by Kathy Barcik of Scotland, and, to Park’s surprise, nestled inside the package were seven 5,000 won ($3.91) bills accompanied by a handwritten note that read: “Please find enclosed 35,000 won for a bouquet of flowers to be laid on my father and mother’s grave ... It means so much to me and my brothers.”

Barcik’s father and mother, James and Ellen Heron, have rested there side by side for the past eight years.

Their gravestone reads “Resting together forever.” Their story began around 58 years ago.

At 7 p.m. on Nov. 16, 1951, in the thick of the Korean War (1950-53), a British soldier was carried to the United States Army’s 121st Evacuation Hospital. Corporal James Heron had sustained serious injuries to his face, chin, arms and legs, and was gravely injured.

Surgeons did what they could for Heron, including amputating his left leg, but were unable to save his life.

Five days later, at 2 p.m. on Nov. 21, Heron was buried in the United Nations cemetery in Tanggok, Busan.

James Heron departs from a train station in Sussex as his wife, Ellen, and son Danny see him off, in this picture from the British News Chronicle. As described in the accompanying article, Danny hands his dad a packet of sandwiches. The article also says: “Three-year-old Danny Heron knows that an army marches on its stomach - even when it goes by train.”

He met Ellen, a private in the army who had served three and a half years, right after he signed up. The two later married, but were separated when Heron was sent abroad in the midst of World War II.

While serving with the 14th Army during the fighting in Burma, James was wounded in the left eye and temporarily blinded. He was discharged from service in 1946 but re-enlisted a few months later.

The Herons and their four children - Jimmy, Kathleen, Danny and Patrick - lived a happy life - until James was called to serve in the Korean War.

On Aug. 31, 1951, Heron, now a corporal with the Royal Norfolk Regiment, made his way to the Crowborough Train Station in Sussex, with his wife and son Danny joining him to see him off.

Ellen and Danny said their goodbyes and watched Heron board the train, not knowing it would be the last time they would see him.

Corporal Heron sailed to Korea on the H.M.T. Empire Orwell and upon arriving on Oct. 1 he was immediately sent to the front. He did not fight long, however. He was killed on Nov. 21 - just one and a half months later.

The family did not know the details of how Heron died until recently, when a veteran who had served with Heron in the war shared the story with Kathy. 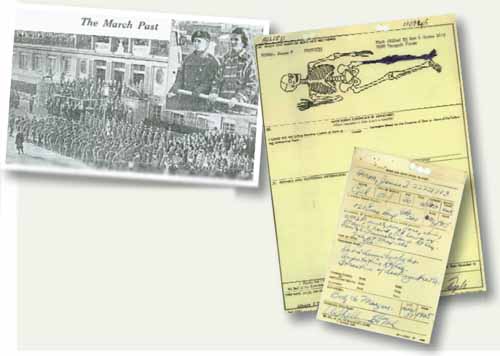 Above: A clipping from a local newspaper, which reads: “Men of the 1st Battalion, the Royal Norfolk Regiment, marching past the saluting base outside the City Hall in Norwich yesterday. Among the relatives and friends who watched from a special enclosure were eleven-year-old James Heron, of the Duke of York’s Military School, Dover; and his mother (inset). James’s father, Corporal H. Heron, lost his life while serving with the regiment in Korea.” Right: The interment report for Corporal James Heron

He told her that Heron and a driver had gone out for supplies but took a wrong turn on the way back, unwittingly driving directly into a live mine field.

Kathy’s older brother Jimmy, who was 8 at the time, says he remembers the day the telegram with the news of their father’s death arrived late one Saturday night in mid-November.

He says he still has vivid memories of seeing their mother’s reaction to the news, which came when he, Kathy, who was 5, and his brothers were all in the bathroom getting ready for bed.

Heron’s death had a profound effect on the family and it wasn’t long before their lives turned upside down.

Ellen fell ill shortly after receiving the news and had to be hospitalized. To add to their misery, the family was forced out of their home, which had been provided by the army.

The family was able to find new living quarters, but Ellen, still reeling from the shock of her husband’s death, was unable to care for her children and they were separated: Jimmy, the eldest, was sent to the Duke of York Military School in Dover; Kathy was sent to a convent in London; and their two younger brothers were sent to a home in Manston. The siblings were not reunited until around 1965, and they never lived together as a family again. 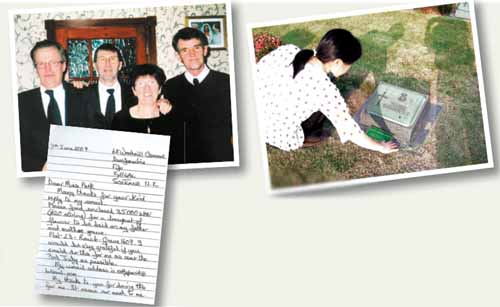 Top left: Heron’s children - Patrick, Danny, Kathy and Jimmy - are pictured in a photo taken at their mother’s funeral, which was held at Kathy’s home in Scotland on Jan. 17, 2001. This is the one and only photo of the four together. Bottom left: Kathy’s letter to the UNMCK. Above right: James and Ellen Heron’s gravestone is inscribed with the words “Resting together forever.” ,Family photographs and news clippings provided by Kathy Barcik, Archival documents provided by UNMCK, Photo above right provided by JoongAng Sunday

Meanwhile, after a long series of ups and downs, Ellen and her daughter Kathy ended up living together in Scotland beginning in 1975.

In 1984, Ellen finally made a visit to Busan to see her husband’s resting place, on a trip supported by the Korean government. She was 70, and it had been 33 years since she had last seen him at that train station in Sussex.

“As far back as I can remember, my mother always said she wanted to lie beside her Jim, and I thank God that she got her wish,” Kathy said. “I would not say my mother loved my father, I always say she worshipped him as we did and still do.”

Kathy and her husband made their first visit to Korea the year her mother died. Her brother Danny visited in 2005 and the two took a trip together last November. All of their trips were supported by the Korean government.

“We would never have been able to visit otherwise,” Kathy said.

Kathy used to ask a friend who lived in Busan to put flowers on her parents’ grave site every now and then. When the friend moved, she turned to the United Nations cemetery.

In her letter, she asked that the flowers be placed on the grave site “as close to July 3 as possible,” because that is her birthday and she “thought it would be a happy time for them.”

“After being there myself, we are glad that he is where he is and that he is with his comrades. And we are very proud of him and all the others in the UNMCK,” she said.

“I do think his death was meaningful, his and all the others, and I pray that all of you live in peace for a very long time.

“Our trips [to the UNMCK] will live in our hearts forever. And hopefully we can one day return to the cemetery that you keep so beautiful for all our loved ones.”