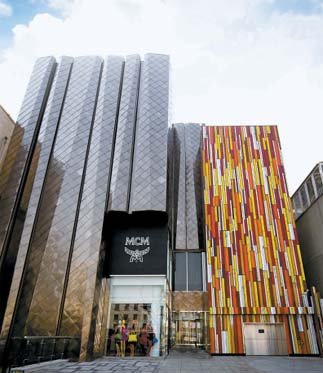 The exterior of MCM Haus, the flagship store of MCM in Korea in southern Seoul, with colorful artwork by Richard Woods, a noted British artist.

After the opening of the company’s flagship store in Korea on March 31 in Cheongdam-dong, southern Seoul, MCM has made its presence felt as a global brand name even though sales of luxury brands are falling due to the financial crisis.

The new collection’s main theme is Timeless, incorporating the need for classic items that will rarely go out of style especially in times of an current economic downfall. 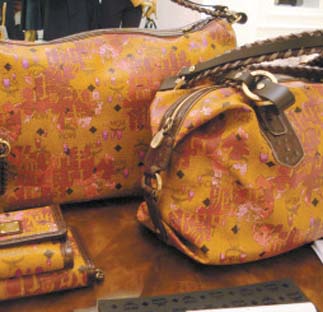 Many of the designs were based on classic lines with subtle details that integrate a modern touch.

The Cognac Visetos Artasia collection includes Oriental artwork that incorporates Chinese characters into their basic Cognac Visetos line, the signifying design of MCM that has a cognac-colored background with the MCM logo print.

“The designers have added Oriental patterns to the bags and wallets to show their diversity as a global company,” said Byeon Min-a, the assistant manager of APR, a public relations company working for MCM.

Practicality was also considered in this line with functional bags such as the Weekender bag and Laptop bag.

“This not only adds to the luxurious look of the bags but makes the price more consumer-friendly,” said Byeon.

MCM Haus exhibits MCM’s latest trends, holding fashion shows and offering a relaxing place for anyone stopping by. Especially with the artwork of Richard Woods, a noted British artist, decorating the exterior of the Haus, it is quite a sight in Cheongdam.

“The MCM Haus is more than just a store, it’s a cultural space,” says Nam.

The new autumn/winter collection will be available for the general public starting from July 17.