Western structures in the palace

Western structures in the palace

Few would contend otherwise, but for those who want hard evidence, the Western-style structures built over the years within the palace compound, of which several remain today, support this argument.

Several foreign accounts of late 19th-century Korea state that the refurbished palace was to be more resplendent than the Russian Legation, one of the signature buildings in the Jeong-dong area in central Seoul at the time. They say it was for that reason that the ideas of prominent foreign settlers like Antoinette Sontag (1845-1925), who ran the area’s Western-style Sontag Hotel, were taken into account.

As with other palace structures and historic buildings, most of the Western-style structures in Deoksu Palace were short-lived, coming and going sometime between the late 19th and early 20th centuries. Only three have survived.

It’s lamentable that the full details behind some of these structures have yet to be dug out, such as when they were built and destroyed. For now, we will have to just be content with what can be seen in records and photos. 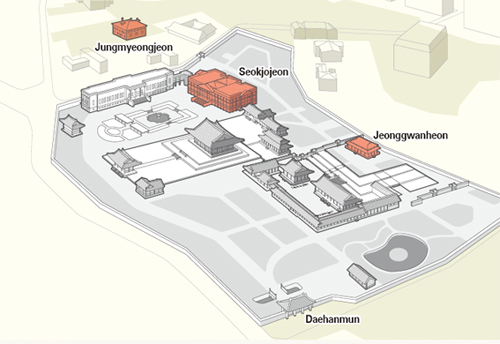 There are three Western-style structures remaining in and around Deoksu Palace today, as marked in red on the map, above center. Seokjojeon can be seen in the top photo on the right, and Dondeokjeon is captured on the left in the same photo. 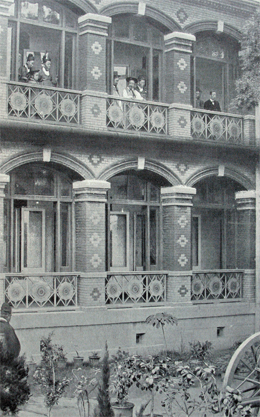 A better view of Dondeokjeon is in the picture at above, with Gojong and Sunjong in the central window on the second floor.

After the deadly 1904 fire at the palace that left many of the structures in ruins, there were calls for the construction of stone structures. And so came Seokjojeon, a three-story, colonial-style stone structure that is emblematic of Deoksu Palace.

According to Canadian missionary James Scanth Gale (1863-1937), “along with the YMCA building and Myeongdong Cathedral, Seokjojeon was the most notable building in Seoul.”

But its construction came at a price. Another Western-style building, Guseongheon, had to be torn down to make way for Seokjojeon.

Not much is known about Guseongheon, except that it was built around 1900, survived the 1904 fire and was used for the emperor’s reception of foreign guests.

Also intriguing to note is that Seokjojeon was the last Western-style structure to be built in the palace compound under the orders of Gojong (1852-1919), the 26th king of the Joseon Dynasty (1392-1910) and the first emperor of the short-lived Korean Empire (1897-1910).

But considering Gojong’s intentions for Seokjojeon’s construction, its completion was shortly followed by historical irony.

Designed by British architect G. R. Harding, work on Seokjojeon began in 1900 and was completed in June of 1910. 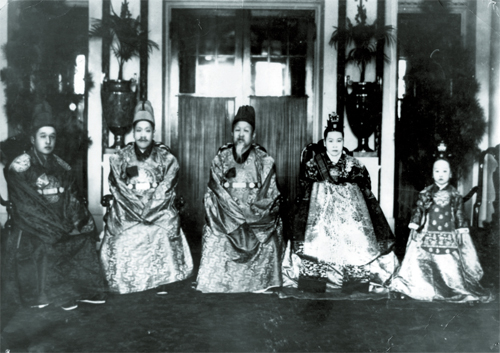 The inside of Seokjojeon can be seen above left, with Crown Prince Yeongchin, Sunjong, Gojong, Eombi (one of Gojong’s wives) and Princess Deokhye, seated from left to right. Provided by Myongji University-LG Yeonam Library

“While this building was the result of Gojong’s resolve to achieve modernization and independence, by the time it was completed his country had fallen into the hands of the Japanese,” notes Ahn Chang-mo, a professor of architectural history at Kyonggi University.

Korea was annexed to Japan two months after Seokjojeon’s completion.

Today, a rare photo of Gojong’s family, above left, taken inside Seokjojeon, gives us a picture of the interior. 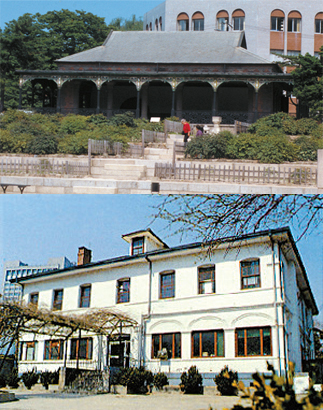 Top: Jeonggwanheon is one of the three remaining Western-style structures in Deoksu Palace. Above: Today, Jungmyeonjeon is outside the palace compound.[JoongAng Ilbo]

What’s sad about the Western-style structures in Deoksu Palace is that many of them were witness to Korean royalty succumbing to the Japanese, providing the backdrop for the king’s removal from the throne, unwanted summits with the Japanese authorities, and ultimately, the unwanted annexation.

One of the buildings in use at the time was Dondeokjeon, seen above right. The picture is used in several foreign publications and the caption in “En Coree,” a book by Angus Hamilton, indicates that the picture was taken after Gojong was deposed and his second son, Sunjong, was enthroned as the new emperor by the Japanese.

“The Emperor, it will be remembered, was forced by the Council of Elders to abdicate and, with his ejection, Corea passed entirely into the hands of the Japanese,” it reads.

Dondeokjeon, according to the Annals of the Joseon Dynasty, was where Korea’s leader greeted foreign guests and held special ceremonies. But in this photo, it’s the scene of a bitter moment in modern Korean history.

The structure was torn down in the 1920s, when the Japanese were redeveloping the city and its roads to their liking.

The architect who designed Dondeokjeon was a Russian-born Swiss man named Afanasij Ivanovich Seredin Sabatin. Although he was a sought-after architect in Korea in those days, not much information about him can be found, according to Kim Jeong-dong, an architectural professor at Mokwon University. It is known, however, that he was in Korea for 20 years beginning in 1884, and that his works included the Russian Legation, Independence Gate and the Jemulpo Club, among others.

“Not much is known about what happened to Sabatin after he left Korea, but it seems he wasn’t able to fulfill his full potential as an architect,” Kim said.

But perhaps no structure played host to a grimmer historical event than did Jungmyeongjeon, another Western-style building in the palace grounds.

Today the structure stands outside the palace walls to the north, but before the walls were built in 1897, it was contained within the palace.

Jungmyeongjeon, meaning “hall of heavy light,” was built in 1896 as the king’s library. “It would become Korea’s first modern library,” notes Kim of Mokwon University.

After the 1904 fire, it was used as Gojong’s temporary shelter. The following year, it was where Gojong was forced to sign the Japan-Korea Protectorate Treaty of 1905.

Willard Straight (1880-1918), an American diplomat to Korea at the time, wrote in a letter on Nov. 30 of that year what he witnessed the day the treaty was signed.

“I saw them myself, for our Legation is now seventy-five feet from the Palace building and separated only by a low wall. [...] One wouldn’t say that the Koreans were free agents exactly. However, he signed. [...] The presence of armed Japanese within the walls would probably have greater effect with him than cold steel at the chest would do with an ordinary chest.”

Two years later, in Jungmyeongjeon, Gojong sent a secret mission to an international peace conference held in The Hague, the Netherlands, to tell other nations that the treaty with Japan had been signed under duress without the consent of the King and the nation as a whole.