50 years of beautifying spaces in Korea

50 years of beautifying spaces in Korea

Busan Sports Complex, the main stadium for the 2002 Asian Games. The stadium is known for its tensile roof structure.

Discussions of Korean architecture would be incomplete without the Space Group, which has designed buildings that have become symbolic of modern architecture in Korea. The group also played a pivotal role in promoting visual and performing arts through its magazine, Space, which celebrates the publication of its 500th issue next week.

Space Group, which celebrates its 50th anniversary next year, has been behind projects large and small, from Kyungdong Presbyterian Church in central Seoul to the main Olympic Stadium in Jamsil, southeastern Seoul. Both are considered outstanding examples of modern Korean architecture.

The group was founded by Kim Swoo-geun (1931-1986), one of the most respected and influential architects in the country. He was one of a handful of architects who went to Japan during the Japanese colonial period. He returned to Korea in 1960 after an absence of nine years, clinching first prize in a competition to design the National Assembly building, though his design was not used in the end. The same year, he established the architectural firm that later became Space Group.

With such a long history, the group’s architectural style has changed over the years and the design philosophy of each of its three leaders has left an indelible imprint on its work.

In the 1960s, Kim’s designs were characterized by their use of bare concrete exteriors. Examples of this style include the Korea Freedom League headquarters on Mount Namsan and the Sewoon complex in central Seoul.

In the 1970s, Kim started using red bricks, and once said that “architecture is a poem made of light and bricks.” 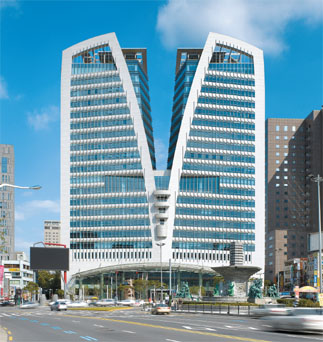 Kim’s red brick buildings include the Yangduk Cathedral of the Masan Diocese, Kyungdong Presbyterian Church and the Arko Art Center in Daehangno, among others.

“Kim Swoo-geun didn’t think of architecture merely as buildings but as part of the urban environment,” said Kim Jong-hun, architect and director of the Appenzeller Noble Memorial Museum. “Kim pioneered the use of new materials that he thought would complement his designs and tried to incorporate functional elements with structure.”

Kim is also credited with designing the Olympic Stadium, which is still considered one of Space Group’s most significant works.

If the red brick buildings represent Kim’s time with the Space Group, the architectural designs of Chang Sea-yang (1947-1996), who assumed leadership of the group after Kim died, are marked by the use of glass, steel and new engineering technologies.

The Busan Sports Complex, the main stadium for the 2002 Asian Games, has a tensile roof made of semitransparent fabric supported by steel wires and columns. 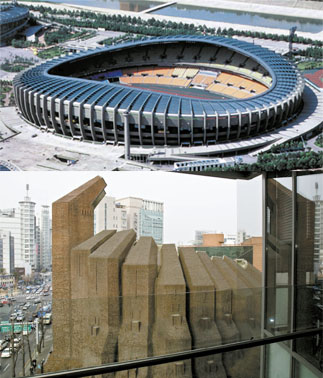 The group’s headquarters near Changdeok Palace in Jongno District, central Seoul, perhaps best reflects the Space Group aesthetic under the leadership of the two men.

The complex consists of two buildings, one designed by Kim and the other by Chang. Kim’s design was chosen as one of the best examples of Korean architecture in the last 50 years by local architects in 1998.

The structure designed by Kim is an ivy-covered red brick building. Completed in 1971, it is representative of his work in that period. Inside, its split floors, brick walls, low ceilings and spiral staircases give it the feel of a medieval castle.

The structure designed by Chang, a glass and steel edifice completed in 1998, reflects his modern sensibility.

Since 1996, the group has been led by Lee Sang-leem, and its signature has changed again, incorporating a mixture of architectural styles and environmental elements. 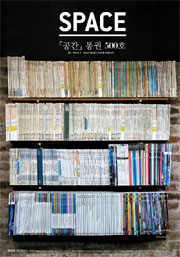 The 500th edition of Space magazine

“Now, our architectural designs use architectural styles from different periods,” Lee said. “Many people who live in metropolitan areas have a longing for nature and rural life, so now we try to combine both urban and rural elements in our designs.”

One of the group’s recent projects is the Seoul Central Post Office building in Myeong-dong, central Seoul. Its unique design resulted from a regulation in the area restricting buildings to a width of 50 meters (164 feet) from the 10th floor, leading the architects to split the building into two, like a zipper half drawn.

But for Lee, what distinguishes the building is not the split but the large public square spreading out before it.

“No other building in the area has such a large square in the front,” Lee said. “The post office and the bank, which both see a lot of human traffic, are located on the basement instead of the first floor to create enough space for the square.”

These days, the firm is working on the design of Pi City, a large commercial complex near Yangjae Interchange in southern Seoul. When completed, it will be the largest building in Korea with floor space of 250,000 square meters, or 61.8 acres. 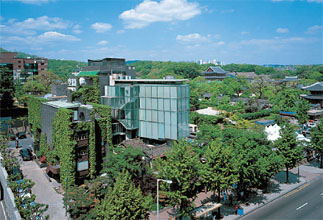 The two buildings that make up Space Group’s headquarters in central Seoul.

Not all of the group’s designs have been successful, however. The Sewoon Electronics Market complex was considered an architectural achievement when it was built in 1967. It was a series of eight- to 17-story buildings connected by promenades built on a north-south axis reaching from Jongmyo, central Seoul, in the north to Mount Namsan in the south. Now, after 40 years, the complex is considered nothing but an eyesore and is being demolished.

In addition to its architectural achievements, the Space Group gained recognition for its contributions to the arts in Korea through its monthly magazine Space and the Space Theater, which is in the basement of its headquarters.

The magazine, published under the name Gonggan, which means “space,” was the first of its kind in Korea and covered architecture, art, dance, theater and music.

“Kim Swoo-geun saw architecture as more than structures,” said Kim Kwang-hyun, a professor of architecture at Seoul National University. “He thought of it as a combination of different artistic disciplines.”

When it began publication in November 1966, its mission was to help preserve all forms of Korean culture. As Kim once said, “We need to record the fading traces of our culture.”

The magazine introduced Korean readers to artists who would later have a significant impact on their respective fields, including video artist Paik Nam-june, dancer and choreographer Hong Sin-cha and Kim Duk-soo, one of the founders of samulnori, a type of traditional Korean percussion music.

Beginning with the July 1994 issue, the magazine included articles in both Korean and English. In mid-1997, the magazine shifted its focus to architecture and is now a prominent architectural journal.

Space Group will celebrate its 500th issue at its headquarters in central Seoul on July 7 at 7 p.m., with special performances by folklorist Sim Woo-sung and performing art troupe Tacit Group. For more information, call (02) 3670-3500 or visit www.spacea.com.