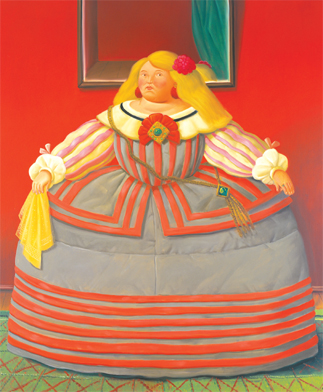 “After Velazquez,” Botero’s version of a Velazquez painting. Provided by the museum

Voluminous characters, droll facial expressions and vibrant tropical colors are splashed across many of Fernando Botero’s paintings and sculptures.

The Colombian artist’s works are infused with warm lyricism and metaphors from Latin American culture, portraying what he has seen and knows from his own life.

The National Gallery of Contemporary Art in Deoksu Palace, central Seoul, is showing an array of pieces that Botero produced between 1985 and 1992 as part of an exhibition that runs through Sept. 17. It’s part of the museum’s ongoing effort to diversify and expand its selection of art from Europe and the Americas.

The works on display, which include three sculptures and 89 paintings, are part of Botero’s own collection. 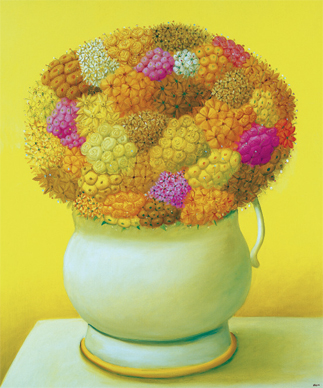 One of the “Flowers” triptych series

One of the first things visitors will notice is the distinctive colors and subjects Botero uses in his paintings. The primary colors seem to reflect a scorching sun and the passionate lifestyle of tropical areas.

“The colors are the same as those used to decorate houses in Latin American countries,” said Ryu Ji-youn, curator of the exhibition.

Botero’s works also represent Latin realism. For still-life paintings, he used fruits like oranges, which are abundant in that area of the world. In paintings like “Adam and Eve” and “Vatican Bathroom,” figures are not Europeans with pale, pinkish faces, but Latin Americans with black hair and dark complexions.

What most differentiates Botero’s works are the shapes of the people in the paintings. Curvy, exaggerated bodies are common in his interpretations of the works of European masters such as Goya, Velazquez and Picasso. 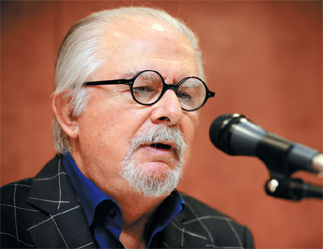 “I wanted to express Latin American sensibility,” Botero said earlier this week while he was in Seoul for the exhibition.

“After Velazquez” is a reinterpretation of Spanish painter Diego Velazquez’s “Infanta Margarita Teresa in a Pink Dress.” While the original painting by Velazquez illustrates the princess in a dignified manner, Botero’s reinterpretation gives her unusual body proportions, a small face and an awkward smile.

Botero also tried to portray his own cultural roots in the paintings. The theme of “Dancers” is, of course, dancing, which is an essential element of Latin American culture.

Along with the exhibition, there will be a series of lectures on Latin American art, literature and music and screenings of Latin American films including “Buena Vista Social Club” and “Pan’s Labyrinth.”