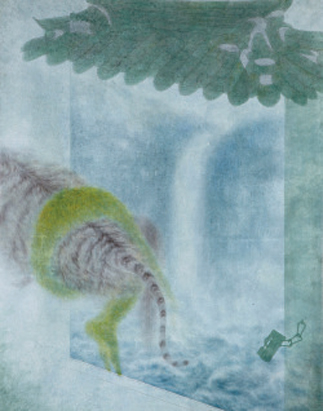 “The inside of ‘Into the hole-details’” by Lee Eun-sil. Provided by the organizer

An “address space” is a decidedly complex technical term that deals with computer memory, which doesn’t sound as though it would lend itself well to the art world.

Nevertheless, the Die Galerie Seoul - located in Cheongdam-dong, in the southern part of the city - is using it as the title of its new exhibit, which opened last Friday.

The “Address Space” exhibit features works by four artists and one performance artist, all of which are just starting to make a name for themselves. 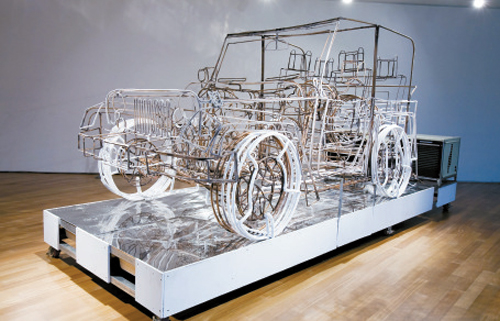 “Africa” by Kwon Jun-ho. Provided by the organizer

“This is the first time the gallery has invited Korean artists to display their work,” said Kim Ha-lin, a curator at Die Galerie. “It’s also meaningful that these artists are relatively new names in the field. They produce experimental and creative work.”

One of those artists, U.S.-based Kwon Jun-ho, has been deeply affected by his time in America. Kwon uses art to convey his thoughts about melding different cultures and races.

In Address Space, he offers up art made from brass pipes. Installed on refrigerated machines that are part of the artwork, the pipes are frozen so that they are covered with white frost.

In pieces like “Birth on December 25,” “Moon Bicycle” and “Africa,” Kwon attempts to show vehicles that people can use to travel across borders into new countries and civilizations.

The exhibit also includes works by Lee Eun-sil, a painter known for her oriental themes that portray dreams and fantasies.

Address Space displays her pieces titled “The Inside of ‘Into the hole-details,’” “Neutral Space,” and “Emerging.” The animals in Lee’s art represent human beings and their emotions, aptly conveying the artist’s impressions of the world.

Another artist, Jo Song, has become known for her use of dark colors, which will be on display in the pieces “Why Do All People Lose Their Minds” and “I Don’t Want to Show My Sadness to the Fish.”

Address Space, however, contains some brighter paintings from Jo, such as “Everything So Far Is Just a False Image.”

Rounding out the group, Park Kwan-taek presents works made by laser film printed on light panels.

His pieces show places that tell stories of the everyday lives of average people, such as restaurants and libraries. Some of his notable works at the exhibit include “Bus” and “Hospital.”

“Address Space” runs through July 31 at the Die Galerie, Cheongdam-dong, southern Seoul. The gallery is near Apgujeong Station, line No. 3, exit 2. For more information, visit www.die-galerie.co.kr or call (02) 3447-0049.