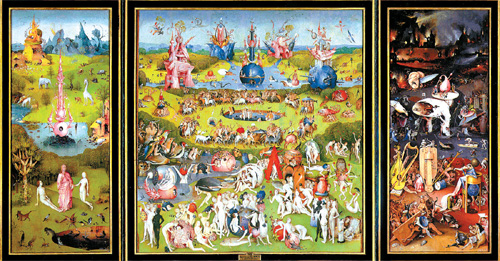 If asked to pick Michael Jackson’s most meaningful album, I’d be willing to bet that the lion’s share of fans would select “Thriller,” which cemented the King of Pop’s legacy.

But the 1991 release “Dangerous” is the most meaningful to me. Sure, a big part of my affinity for the album stems from the fact that it was the one that really turned me on to MJ, who died two weeks ago. However, I’m also intrigued by the album cover, which incorporates the work and spirit of Hieronymus Bosch (1450-1516), one of the greatest weirdos in European art history. 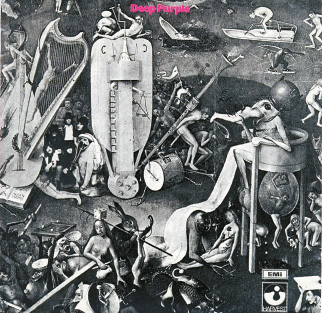 The cover, designed by the contemporary American painter Mark Ryden, is intentionally gaudy, consisting of a complicated structure of various kitsch in vivid colors. Some parts of old art masterpieces are scattered here and there, among them a grown man and woman in a transparent globe that connects like a womb to a bird-headed queen. Located on the right side of the album cover, I remember thinking it was the nastiest - yet most intriguing - part of the scene when I first saw it. Later, I recognized that it came from Bosch’s “The Garden of Earthly Delights” (1503-1504), which might be the most enigmatic fantasy painting in art history.

Let’s look at the original triptych by the Northern Renaissance artist. With strange buildings that seem to be made of both organic and inorganic matter in the background, numerous naked men and women eat fruit, flirt and play with giant animals. 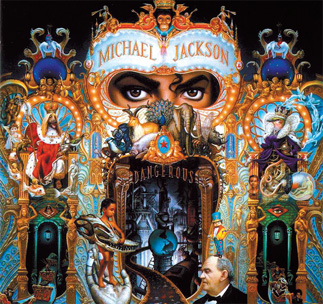 Cover art of Michael Jackson’s “Dangerous” album. The couple in a globe, far right, matches the image on the left side of Bosch’s center panel.

The part of the painting applied to the cover for the “Dangerous” album is in the left section of the foreground. Notice the odd vehicle that looks like an extraterrestrial vegetable. Attached to it is a transparent globe that could be a glass ball or possibly a drop of liquid. Inside the globe sit a man and a woman, who seem to be lovers. So what exactly does it all mean?

The Bosch painting is full of icons that are difficult for us living in the modern world to understand, and there’s a wide range of scholarly interpretations. One of them ties the images to the old Flemish proverb, “Pleasure is as fragile as glass.” Given this, we see that the transparent globe already has cracks. Therefore, we can make the interpretation that the couple is cut off from the outside world by the intoxicating pleasure of their love, symbolized as a small world surrounded by a glass barrier. And of course all that could come crashing down, exemplified by the cracks in the fragile barrier.

Many art historians and critics, including Ludwig von Baldass, interpret the central panel of The Garden of Earthly Delights as a didactic warning about falling for the temptations of sex and other pleasures, which in turn leads to sin. Under this interpretation, the giant animals playing with humans are actually demons. They encourage the men and women to covet fruits, which symbolize desire and pleasure.

This interpretation is based on the fact that triptychs from this period were generally intended to be read sequentially from left to right. The left panel, therefore, depicts God introducing the first woman, Eve, to the first man, Adam, in the Garden of Eden. In this painting, Adam and Eve are innocent. They are not together for decadent pleasure, but rather for healthy propagation. The right panel, on the other hand, depicts a hellish scene in which humans are punished for their sins in bizarre and cruel ways.

If the three panels are a story in sequence, then the central panel should depict a scene in which humans are committing sins as they seek out pleasure. According to this interpretation, the garden, which looks bright and cheerful at a glance, is actually a false paradise filled with distorted and grotesque elements.

Some art historians such as Wilhelm Franger, however, say that the central panel does not depict unsound sexual pleasure but instead conveys a real paradise where men and women enjoy a healthy sexual life in harmony with nature - like Adam and Eve did in the Garden of Eden. These experts say the triptych could have been commissioned by the Adamites, a heretic sect of the day. This group, essentially a Medieval version of hippies, is said to have formed a nude community and pursued sexual freedom, insisting that all should return to the era of Eden.

The ambiguity of “The Garden of Earthly Delights,” which generates such contrasting interpretations, as well as its eccentric and grotesque details, have been charming artists of modern and contemporary times. This painting has been adapted not only for Michael Jackson’s album cover but also by many other musicians, including the group Deep Purple.

Art critics say that Bosch’s fantastic icons came not from his personal madness but from the day’s religious and folk symbols. It may be true. But the grotesque figures in Bosch’s works are still inspiring artists today.