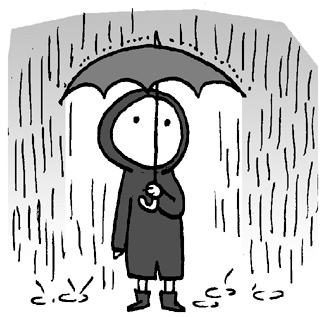 A seasonal rain front is heading over the Korean Peninsula. Some 300 millimeters of rainfall has fallen on Busan in just one day, causing a deluge of damage across the southern regions. The central region, including Seoul, had 200 millimeters of rain in a day, equal to 15 to 20 percent of its annual rainfall.

A continuous rainy spell signals a tense power struggle in the Korean skies as the cold Okhotsk high-pressure system from Russia and the hot North Pacific Ocean atmosphere collide. The battle between these two high pressures creates a seasonal rain front.

Old people called the rain spell yimwu, meaning “a continuous spell of rain for more than three days,” or jeokwu. The word jangma we use for the monsoon rains today is known to have come from the word dangma. Dang means “long” and ma refers to a rainy spell and is also an old word for “water.”

The rainy season also appears in Chinese and Japanese as meiyu and baiu, respectively, referring to the wet season when plums are just about to ripen.

Typical summer weather, characterized by a intense heat after a month of heavy rainfall - from late June to late July - has seen significant changes these days.

Although the rainy spell remains unchanged, some people insist that the whole summer period should be referred to as jangma, as there is a significant increase in rainfall both before and after the rainy season.

As the period of intensive rainy days disappears, the Korea Meteorological Administration now avoids forecasting the beginning and end of the rainy season.

Summer weather is getting more difficult to cope with. The number of torrential downpours, heat waves and tropical nights is increasing.

Despite more rainfall, the number of rainy days is decreasing, while there is a marked increase in the number of days with intense rain spells.

In fact, the metrological administration predicted last Wednesday that the number of tropical nights - when night temperatures stay above 25 degrees Celsius (77 degrees Fahrenheit) - this summer will exceed the average figure of the years between 1971 and 2000.

The fluctuating summer weather is mainly due to global warming. Human activities have increased emissions of greenhouse gases in the atmosphere, contributing to worsening climate change. As the amount of moisture increases through heavy rain, so temperatures rise.

Nature seems to be giving us heat waves and heavy rains in return for what it has received from humans.