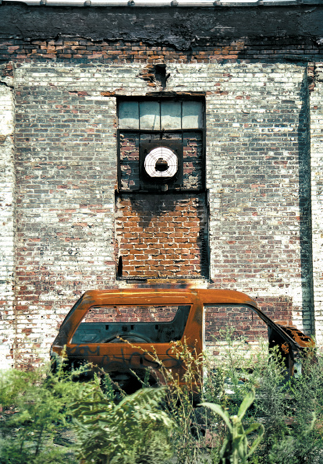 From eerie, black-and-white pictures of a mystic pine forest to a collage of images of the human body, the works of 10 renowned Korean photographers are now on display at the Hangaram Art Museum in southern Seoul.

The exhibition, titled 2009 Odyssey, displays some of the best Korean photography from the past 10 years and gives visitors a chance to ponder where it s headed over the next decade.

The 10 photographers are not only recognized as artists, they re also commercially successful. Each has a unique style and approach, helping diversify the 2009 Odyssey exhibit.

In the Cityscape series on display, Joo turns a critical eye on metropolitan areas, highlighting everything from huge in-your-face advertisements to towering high-rise buildings.

Bae, who grew up in Yeosu, South Jeolla, studied art in college but later fell in love with photography. He made a name for himself taking pictures of nature, particularly pine forests. In 2007, two photos from his Pine Tree series fetched a combined 100 million won ($77,235) at a Christie s auction. The black-and-white photos of the foggy pine forest in Gyeongju resemble traditional Korean ink paintings.

Koo s In the Beginning series has been popular for many years. He took pictures of different parts of the human body and linked them together with a sewing machine, marking a departure from typical photographs of real-life scenes.

Lee Gap-chul s photograph series on display resembles a documentary, illustrating fading traditions in an industrialized world. With photos of aged farmers in the countryside and an old man fixing a traditional tile roof, Lee attempts to show traces of the past.

The Koh works on display are a combination of photography and sculpture. He studied sculpture at Seoul National University and photography at Pratt Institute in New York. By attaching together photos taken from different angles and perspectives, he creates a three-dimensional image.

Media agencies, public and private museums and private collectors loaned the photos to the museum for the exhibit.