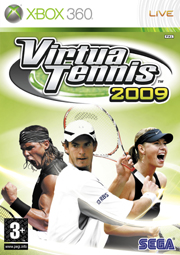 Sports fans have been treated to some exciting tennis matches this year, such as Israel’s upset victory at the Davis Cup and Roger Federer’s record-breaking performance at the 2009 Wimbledon Championships.

So upon seeing that Sega had released a new tennis title ? “Virtua Tennis 2009” ? I just had to pick it up. I’ve been a fan of the Virtua Tennis series since the first version was released in 1999, for the sole reason that the games are simple and fun to play.

The latest title doesn’t stray from its predecessors in that regard, while crisp graphics and audible grunts in the ladies games add a nice touch.

The main problem, however, is that the game is too easy.

Don’t get me wrong: I’m a big fan of games that bypass the complex controls and mind-boggling missions that have become commonplace today. But Virtua Tennis 2009 is just too simple, diminishing its replay value.

I chose American James Blake and his “powerful stroke,” cruising through the Wimbledon tourney. I even upped the difficulty to the highest possible level and still managed to crush my opponents ? including Roger Federer, whom I gobbled up like Pac-Man. Sorry, Roger, not on my Xbox 360.

In all fairness, the previous Virtua Tennis titles have been just about as easy. However, the latest game doesn’t offer enough players, and starting up tournaments with a limited cast of characters isn’t fun. Having said that, the game does offer 40 detailed courts. It also offers a number of tournaments including the French Open, U.S. Open, Wimbledon and the Davis Cup.

Its new feature is the create-a-player mode, which allows gamers to design their very own superstar from a cast of base characters. One can hand-pick everything down to the serve and backhand forms. While the create-a-player feature is better than not having one at all, it pales in comparison to similar modes in other sports titles on the market. For example, in “UFC 2009 Undisputed,” gamers can actually create characters that closely resemble themselves, down to the fine details such as freckles. It might not be fair to compare the two titles, but I just couldn’t help but think Sega could have done more to enhance this aspect of the game.

The verdict: The game can be fun to play with friends or online, but it just doesn’t have enough depth, and the limited number of characters is a disappointment. Having a list of retired legends to round out the roster would have be nice.

Rating: ★★: Rent it, borrow it, but don't add it to your collection.