There's plenty to do if you re sleepless in Seoul

There's plenty to do if you re sleepless in Seoul 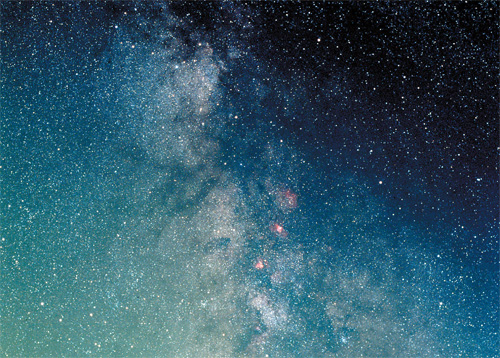 The best time to see the Milky Way is on a summer night the only part of the year when you can see its center. By Kwon Hyuk-jae

Summer nights in Korea can be cruel.

During the rainy season, wet unpleasantness envelops the city, turning even a short stroll after work into a daunting and often damp task. Then summer kicks in full force, leading to sweltering, sleepless and sweaty nights.
It s an interesting irony, as the shortest nights of the year can actually seem like the longest.

So here we find ourselves today, weary from battling through most of the rainy season and bracing for the steamy humid nights.

In fact, it s already getting hot outside. On July 17, the lowest temperature of the day was 25 degrees Celsius (77 F), according to the Korea Metrological Administration. That s defined as a tropical day the first of the summer. It was the same story across the nation that day as well, with the lowest temperatures at 25.3 degrees in Gangneung, 25 in Gwangju, 28 in Jeju and 26.2 in Seogwipo.

The KMA said the hot temperatures are the result of a weakened monsoon that s lingering over the South Seas, causing gray, dreary weather that is blocking direct sunlight but is still pushing through warm, moist air.

So how can you beat the heat on these sleepless summer nights?

Well, you can groan and whine about how hot it is.

Or you can try to enjoy it by taking advantage of some sites and scenic spots that come to life when the sun goes down.

The bright city lights seem to glow with a greater intensity during the hot months, perhaps because so many people are having trouble sleeping.

Some of the top nighttime views can be seen on and around the Han River bridges.

A highly recommended spot is the new Cafe Rainbow on the Hannam Bridge, which provides visitors with views that previously could only be seen from a ferry. Gwangjin Bridge, built especially for pedestrians, is also a good place to view the night scenery. 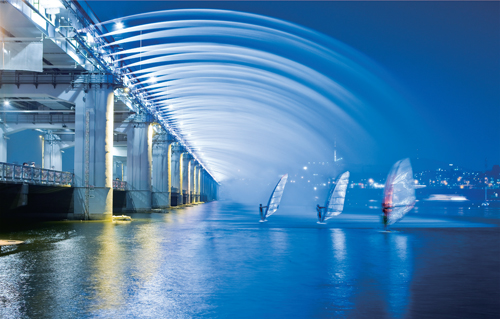 Young people wind surf on the Han River near Banpo Bridge on a tropical night. By Kwon Hyuk-jae

The lower part of the bridge, which has been converted into an observation platform, has glass floors (don t worry, they re strong), making it seem as though you re floating over the river.

If you want a bird s-eye view of the shimmering city, stroll on over to N Seoul Tower. Or just look at it from a distance, as the structure itself serves as a giant LED light, changing colors and patterns every so often throughout the night.

Perhaps the best way to enjoy a summer night is to find a secluded spot to relax and gaze up at the majestic Milky Way. Summer is in fact the only time of the year when you can see its very center. For those who are a bit bolder, you can join plenty of other Koreans and take a leisurely night hike up a mountain.


Look toward the heavens to beat the heat


Counting Stars
Stargaze in the summer? Under that dreary gray thing you call the sky? Amid the suffocating humidity? Ha!

O.K., perhaps spending an evening sprawled out in a grassy area staring toward the heavens doesn t initially sound like the best way to spend a summer night. Many locals say the prime stargazing season is autumn, when the nights are long and the skies are clear.

But you shouldn t write it off entirely for the summer. After all, there are plenty of stars that can only be seen by the human eye in the summer. And did we mention you can also catch a glimpse of Jupiter for the next few months? We ll get back to that in a bit.

For now, let s explore some of the best stargazing sights and observation spots in and around Seoul.

The highlight this summer is easily the Milky Way, a sparkling river of 100 billion shimmering stars. The best time to see it is from 9 to 11 p.m. But this celestial beauty, which resembles a sprinkle of fine powdered silver, can be a bit difficult to spot. You must find a secluded area where there isn t much man-made light, which can be a challenge in Seoul. Considering this, the outskirts of the city are better than the center.

An elevated area such as a hill or the top of a high-rise building is recommended. You also must remember to give your eyes time to adjust to the darkness, so avoid looking at bright lights such as cell phone screens.

A must-see this summer is Jupiter, which is fitting, given that it s also the 400th anniversary since Galileo created the first telescope. Through this telescope, Galileo observed four moons circling Jupiter, proving that the Earth did indeed move around the Sun. To honor this achievement, the International Astronomical Union and Unesco dubbed 2009 the year of astronomy. Jupiter is visible from now until September. By observing the moons of Jupiter through a telescope, you can ponder the significance of Galileo s discovery.

Now, you ve just got to find the perfect place to see these nighttime sights.

Here are some suggestions:

Astrovil
Astrovil is located at the top of the 650-meter (2,132 feet) Mount Chiak in Gangwon Province. In 1999, it was designated as a starlight reserve, so any type of light that might hamper observation is strictly prohibited. Because of this, it s even easy to mistake the shimmering Milky Way for a cloud. Astrovil is hosting a children s summer stargazing camp called Finding the Milky Way next Wednesday and again on Aug. 10,

Songam Observatory
It takes about 20 minutes by car to get to the Songam Observatory from Gupabal-dong, Eunpyeong District, northern Seoul. Public transportation also serves the area. The largest observatory in the nation, visitors can stay overnight to fully immerse themselves in the experience. A program called The Challenger Learning Center, created by the U.S.-based Challenger Foundation, allows people to experience what it s like to be in outer space. If you have time, be sure to check out the nearby Jangheung Art Park and Jasaek Arboretum.

Cosmopia Observatory
This place is filled with programs that offer stargazing activities. Its main program lets visitors see the Moon, Jupiter and Saturn in addition to other planets, star clusters and outer galaxies. Reservations are required for this program. Also, because the observatory is located in a nature reserve on Mount Myeongji, you can also see fireflies weaving through the dark fabric of the night.

Nature and Star Observatory
This observatory allows visitors to view the stars and participate in discussions focusing on such topics as why stars shine and how they are born. Tucked deep inside a nearby forest, it is a cute and cozy structure built with Finnish pine trees.

Astro Cafe (Mount Jungmi Observatory)
Located in the middle of the Jungmi Recreation Forest, one can enjoy both a therapeutic walk through the forest and a stargazing experience simultaneously. Astronomy specialists serve as guides, telling captivating stories about the stars above.

Nocturnal climb offers stellar views both above and below


One of the most popular leisure activities during the summer is nighttime mountain climbing.

Once considered an extreme sport suitable only to professional mountain climbers, it has evolved into a popular activity among everyday Koreans.

At exit 6 of Sadang Station, for example, you ll often see people with backpacks at night preparing for a hike. Sadang Station is the starting point of the Mount Gwanak climbing route.

However, there are things to keep in mind before you decide to take up this challenge.

First, it is better to choose a mountain in the heart of the city where you can enjoy the lights down below and catch public transportation after you re done.

That s why Mount Gwanak, Mount Acha and Mount Surak in Seoul are particularly crowded during summer nights. The same can be said for Mount Palgong in Daegu and Mount Geumjeong in Busan. Remember, however, that you cannot climb Mount Bukhan at night. Climbing a mountain in a national park at night is prohibited and carries a fine of 500,000 won ($396.80).

Many night climbers enjoy 12-hour excursions that last until dawn.

One such course starts from Uijeongbu in Gyeonggi Province, winds to the peaks of Mount Surak and Mount Bulam and finally ends at Mount Acha, where you can enjoy the sun rising over the Han River.

However, this is not an easy challenge for inexperienced mountain climbers, and novices or casual hikers should probably choose a hike that takes no more than three hours.

When selecting a hiking path, it s a good idea to make sure that there are plenty of ridge lines.

This way, you will be able to enjoy a beautiful night view and cool breezes. Without these views, there would really be no point in climbing mountains smack dab in the dead of night, after all.

Planning a route that winds through valleys is also a good idea, as the sound of water will help you find your way should you get lost.

There are also several other precautions you should follow.

Don t plan a night hike alone even if you re an experienced professional climber. And make sure you bring a long-sleeved shirt or a windbreaker.

Also, it is vital that you bring a lantern or a flashlight. It s best to get the kind of light attached to a headband so you can keep both hands free for climbing. You can find these in the city for as little as 30,000 won.

Additionally, avoid climbing on a cloudy night. Instead, choose a crisp, clear evening, preferably one with a full moon, to get the most out of the experience.