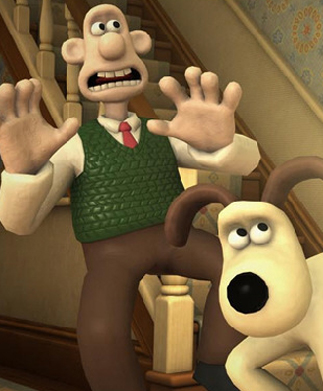 Come with me to the little town of Wigan in Manchester, where, in a modest house on West Wallaby Street lives a man and a dog who know the value of imagination, the meaning of common human decency and the little pleasures of a good cup of tea and a wheel of Wensleydale cheese.

This is, of course, the home of Wallace, the scatterbrained but well-intentioned inventor, and Gromit, his long-suffering but devoted pet. Thanks to their claymation television shorts and feature film they’ve become probably the most recognizable and endearing characters ever to come out of the north of England.

Now the two are heading into a new medium - the video game - in “Wallace & Gromit’s Grand Adventures,” a series of four episodes from Telltale Games.

In case you’re not familiar with the concept, episodic gaming involves the periodic creation of a brief (usually two- to four-hour) game that is part of a longer series - thus they can be sold more cheaply and released more frequently.

Telltale is today the best-known episodic game developer in the world, and for good reason. The company singlehandedly resurrected the old PC point-and-click adventure game genre (think “Day of the Tentacle” or “Space Quest”), of which Wallace & Gromit is another example. The episodes in this “season” can be downloaded from Telltale’s Web site individually for $8.95. But if you like the free demo, you’ll probably want to grab all four for $34.95.

The episodes have come out monthly, and the most recent one was about to be released as this review went to print.

Unlike almost every other kind of game today, these adventures are leisurely affairs that wait for you to finish the current part of the story, no matter how long that takes. The player switches between the man and his canine companion, steering them toward clues, inventory items and conversations with a simple click of the mouse.

The puzzles are all straightforward, with none requiring any particular skill or even deep thought. There’s no way to lose, except to give up out of boredom. So be warned - you’ll be playing these for the story and dialog, not the mental workout.

Fortunately, the humor of the shows does shine through, with fun recurring characters. The highlight so far is the second installment, “The Last Resort,” which sees Wallace and Gromit’s long-awaited beach holiday at Blackpool postponed by inclement weather. Of course, Wallace doesn’t let that dissuade him and sets out to build a new beach in his flooded basement for the whole town to enjoy.

But later, dinner takes a sinister turn as one uncouth visitor is thumped on the head by two of Wallace’s canine hellions, and the local constable gets carried away hunting down the culprits.

Of course, all the actual evidence-gathering is left to poor exhausted Gromit, since the officer is not too bright. He actually has this to say about the weapon: “It was probably a blunt instrument. Your more polite instruments rarely do much thumping.”

The stories do lack the wide scope of the televised outings - due, I’m sure, to technical and time constraints, most of them take place entirely within Wallace’s house and the local street. And Wallace himself is played by Ben Whitehead, the character’s “backup actor,” rather than his regular voice, the (probably) more expensive Peter Sallis.

Since the play does move along more slowly than most gamers are used to, the online demo is a must before buying. But if you’re nostalgic for either the good old days of LucasArts and Sierra adventures or for these two delightful classic characters, it’ll be hard to find a more charming way to look back.

Just have some gouda handy in case you get hungry, Chuck.