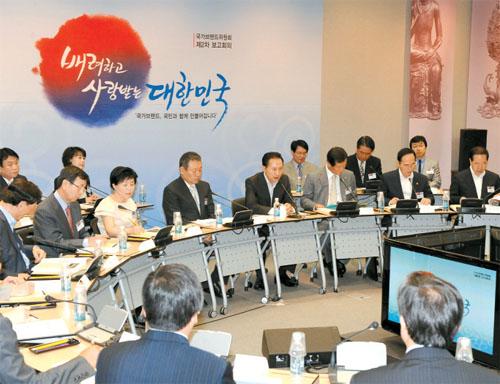 Lee Chan-buom was walking along a Manhattan street in June 2008 when a large photo splashed across the front page of The New York Times caught his eye.

The image showed tens of thousands of people gathered in Seoul amid a sea of candlelight stretching from the Gwanghwamun area to City Hall, a gripping scene that captured the fervor of protests here last summer against the government’s decision to resume United States beef imports.

It was one of the few stories from Korea that captivated the world, let alone made the cover of one of the globe’s most influential newspapers. But it wasn’t exactly the kind of media attention the country was hoping to see. “It’s very difficult to get on the front page of The New York Times,” said Lee, now the director general of South Korea’s Presidential Council on Nation Branding, which formed in January. “I understand that such events can be very massive. But I think a better understanding of Korea would probably make such things a little bit less significant.”

The beef protests added momentum to South Korea’s push into so-called nation branding, a drive to manage the country’s international reputation that, so far, has had limited success.

In an effort to change long-standing impressions about Korea overseas, officials are promoting the country’s unique attributes. The hope is that people around the world will more closely identify the nation with its food, culture, businesses and traditions.

Local officials face a difficult task in a country that has seen numerous street protests, corruption and frequent confrontation with its neighbor North Korea. But there’s a lot at stake, officials say, including potential business investment and tourism dollars.


Underpinning new promotional initiatives and slogans, the South Korean government and other organizations leading the charge are making a stronger commitment to listening, explaining and forging real change to improve the country’s standing internationally.

“We have to engage in a more open dialogue with the outside world and talk about both the positives and the negatives,” Lee said. “It’s not always pretty.”

Several high-profile surveys have shown that people around the world have widely differing images of South Korea. One image, though, is quite common: Many foreigners view Korea first and foremost as a divided country, according to a November 2008 survey by the Corea Image Communication Institute (CICI), a nonprofit organization working to promote a better understanding of the country abroad.

That’s not to say foreigners necessarily have a negative perception of the country.

The most recent survey, conducted jointly by the branding council and the Ministry of Knowledge Economy, shows that many people in other countries associate Korea with technology, food and TV dramas. The Korean War and North Korea ranked sixth and seventh, respectively. The survey was conducted from November 2008 to January 2009 and questioned 4,214 adults in 25 countries.

Still, observers say the country’s image differs greatly depending on who you’re talking to. Many people in the West still associate the country with turmoil and its chaotic past, which overshadows its other achievements.

“The events themselves may be forgotten and may not show up in most surveys, but at the time they were the only things that people knew about South Korea,” said Simon Anholt, a policy adviser whose Anholt-GfK Roper Nation Brands Index has become a measuring tool for many countries’ promotional efforts. South Korea ranked 33rd out of 50 nations in the 2008 index, which incorporates international views of the countries’ reputations, cultures and business environments.

“The generally disagreeable impression remains pretty much forever, unless and until the country does something new, more striking, more positive and more relevant on the international stage,” Anholt said.

Phillip Raskin, market leader at public relations and communications firm Burson-Marsteller in Seoul, said Korea can promote whatever slogan it adopts as much as it wants. But actual events and general perceptions can easily overshadow those efforts.

“The top 10 forwarded pictures from 2008 are going to be beef protests and lawmakers hitting each other with fire extinguishers,” said Raskin, who also sits on some advisory panels for the presidential council on branding. “A peaceful picture of Cheonggye Stream is not one of those photos.”

Many Western expats in Seoul say their friends back home don’t know much about Korea, tending to think primarily of China and Japan when it comes to Asia. What they do know about the country appears to be shaped by news reports.

“They know three things: [North Korean leader] Kim Jong-il, the Korean War and electronics,” said Devin Whiting, an expat from Atlanta, Georgia, in the United States who has been in Korea for two years and works for the English-language radio station TBS-eFM.

It’s also a matter of relevance. Major industrialized democracies in the West, along with Japan and Brazil, are seen as the exclusive “downtown areas” of the planet, Anholt said.

But most countries, including South Korea, hover in the planetary suburbs, mere afterthoughts in many people’s minds, he said.

The primary problem in nation branding here has been a lack of focus - and an overall consensus on what Korea “is,” experts and officials say.

Korea is “a million little touch points of experience,” Raskin said. “We don’t really have a core idea of what Korea is and Korea itself does not provide it for us.

“That’s one of the major problems. If you ask Koreans, sometimes the answer is ‘Well, what do you want us to be?’”

Asia knows the divided Korea better than the West, experts say, so different strategies are needed.

But officials must also grapple with the fact that the country’s image is exceedingly fragile, meaning countless months and even years of hard work can be erased almost overnight.

“Ten years of work may be offset by one nuclear test,” Euh Yoon-dae, chairman of the presidential branding council, recently told the National Assembly.

Euh also has said that the popular tours to the demilitarized zone could in fact be counterproductive.

“Once the foreigners return to their home countries, their only memory about South Korea tends to be its confrontation with North Korea,” Euh told the branding council’s International Advisory Forum in June.

When it comes to the North, there’s not much officials can do.

“We cannot cover up North Korea,” Lee said. “The only thing we can do is concentrate on the positive things that we do.”

So how does a country actually go about improving its image abroad?

One of the first steps is to explain the negative images in a productive way, which is a key part of the branding council’s task.

For instance, the beef protests could have been framed as part of South Korea’s long history of well-developed and organized street demonstrations, Lee said, possibly by promoting that angle to the media.

On a broader scale, the government and other organizations are crafting a comprehensive strategy to promote the country abroad.

Both the Presidential Council and the CICI say they are doing heavy research, talking to thousands of politicians, public relations pros, advisers and other opinion makers on panels and advisory committees, both in Korea and abroad.

A new national slogan is on the way as well, timed for President Lee’s trip to the G-20 Summit in Pittsburgh in September. The current ones - “Korea Sparkling” and “Dynamic Korea” - will likely be scrapped, officials said, as they have proved somewhat ineffective.

A Korea National Tourism Organization survey found that only 23-25 percent of respondents thought that Korea Sparkling presented the country as a unique tourist destination.

Officials have said Dynamic Korea has become associated with violent demonstrations rather than South Korea’s fast growth and strong IT.

As part of its renewed branding push, the presidential council and other organizations are also looking to:

Communicate better with expatriates in Korea by retooling stale government Web sites and including more blogs and forums.

Raise global awareness among Koreans themselves, better incorporate the country’s culture with tourism efforts, and share its knowledge of technology.

At the same time, boosters are focusing in on hansik, or Korean food, a defining part of the culture that is consistently popular with foreign visitors and expat bloggers.

CICI President Choi suggests that hansik could bind together several sides of Korea’s culture, from interior design and art to music and language.

Recent efforts to promote Korean food in Brussels and Paris were a success, officials said, and there are plans in place to provide Korean cooking classes at renowned schools such as Le Cordon Bleu in Paris and the Culinary Institute of America.

The government also is putting $40 million behind a campaign to help Korean food become one of the world’s top five ethnic cuisines, in part by increasing the number of Korean restaurants abroad to 40,000 by 2017.

Authorities hope these efforts will at the very least lay the groundwork for the country to capitalize on positive images.

“Once the interest, once the channels are there, the story will unfold itself,” said Lee, admitting that the government can support positive images but has little control over negative ones. “The Korean people themselves will shape the image of the country.”

Korea has shown in recent years that it does indeed have a lot to offer, experts said.

Hallyu, a massive wave of pop music and TV dramas that swept across Asia, helped boost the country’s profile in Asia and Australia, while B-boy dance crews perform in London and New York.

Additionally, even negative images can be useful, government officials and experts said.

“Look at ‘Slumdog Millionaire,’ which was a very accessible movie for Westerners,” Raskin said, referring to the high-profile movie set in the squalor of Indian slums.

“It didn’t present a beautiful picture of Mumbai, but it presented a picture, so people now have some access to it.”

The goals are ambitious, and experts say it often takes a long time to rebrand an entire country. Korea also often has a habit of setting - and sometimes failing to reach - grandiose targets. But officials said they are taking steps in the right direction.

“There is a certain Korean uniqueness, nothing great, nothing small,” Lee said. “But there’s something Korean about us that we can share.”