Pai Chai HakDang was built in 1887. It was demolished in 1923 to make way for construction of another school building. Provided by Myongji University-LG Yeonam Library

Schools open our eyes to the world we live in and perhaps, most importantly, to who we are and who we can be.

The process is never easy. School years, like life, are often an assorted package of joy and pain, with fun and embarrassing moments, friends and enemies, laughter and tears.

The people who survive those awkward, yet critical, stages are often endowed with a sense of achievement and, later, yearning and nostalgia. That is perhaps why we visit our former schools and attend reunions.

Historians generally trace Korea’s modern, Western-style schools to late 19th-century Jeong-dong, Seoul. These schools were defined not by foreign teachers or advanced teaching methods, but by the idea that education was for everyone - men and women, rich and poor.

Modern schools were introduced, alongside Western customs and concepts, with the opening of Incheon Port to the international community in 1883.It was often the case that foreign missionaries with backgrounds in education or medicine set up schools and hospitals with the hope of helping the needy and evangelizing along the way.

As noted in previous installments of this series, Jeong-dong was where many of the missionaries in Korea at the time lived and worked. It was also where they built schools and hospitals to disseminate their ideas.


From ‘seodang’ to modern schools

Seodang, or village schools, were the main educational institutions in Korea from the Goryeo Dynasty (918-1392) to the Joseon Dynasty (1392-1910). The literal meaning of seodang is “writing house,” or the place where people learned to write. 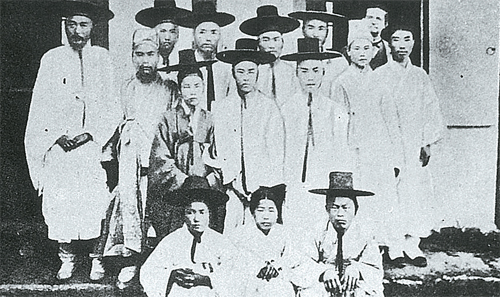 With no government laws or control on education during that period, seodang were privately run. And with the strict class system and women’s low social status, seodang were only for yangban, the ruling class, and boys.

There is an interesting account of seodang in the book “Korea and Her Neighbours” (1898) by Isabella Lucy Bird (1831-1904) that provides a vivid description of a typical seodang. Bird was an English writer and historian who was in Korea in the late 19th century. She wrote:

“The pupils, seated on the floor with their Chinese books in front of them, the upper parts of their bodies swaying violently from side to side or backwards and forwards, from daylight till sunset, vociferate at the highest and loudest pitch of their voices their assigned lessons from the Chinese classics, committing them to memory or reciting them aloud, writing the Chinese characters, filling their receptive memories with fragments of the learning of the Chinese sages and passages of mythical history, the begoggled teacher, erudite and supercilious, rod in hand and with a book before him, now and then throwing in a word of correction in stentorian tones which rise above the din.”

The earliest modern schools in Korea, according to historians, were the English School and the Yukyeong Gongwon. The English School was established in 1883 by Paul Georg von Mollendorff (1847-1901), a German diplomat, by order of King Gojong (1852-1919). The Yukyeong Gongwon, or Royal College, was established in 1886, also by the Korean government.

But these schools were established mainly for educating government officials and yangban in the English language and Western customs, as increasing exchanges with foreign powers made speaking English and understanding Western customs a necessity. 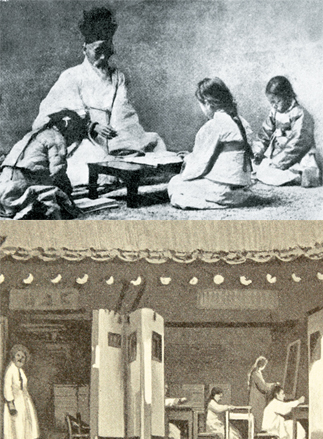 That winter, the number of students rose to 32, and in June the following year it rose again to 63, records show. With students from across the country enrolling in increasing numbers, Appenzeller decided to build a larger building to accommodate them.

Things progressed quickly. Appenzeller bought a larger lot and filed an application with the Korean government to establish the school. In September 1887, a new, Western-style building replaced the hanok. 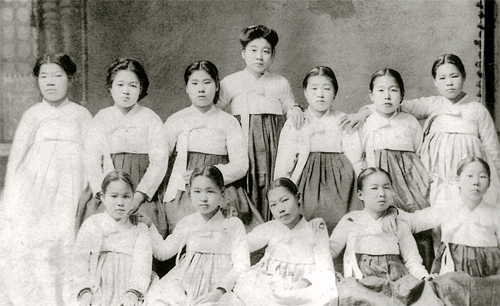 A photo of Ewha students thought to have been taken in 1918. [JoongAng Ilbo]

The building was designed by Japanese architect Tomotaro Yoshizawa, who had been attending the Methodist services Appenzeller was holding in his home at the time. Yoshizawa later designed Chungdong First Church, the first Protestant church in Korea, which was founded by Appenzeller in 1898.

The school was named Pai Chai, or “fostering talent,” a name given by King Gojong.

People also called it Pai Chai HakDang American School for its association with American customs and ideas. In addition, its founder was an American and Pai Chai was built with contributions from American Methodist missionaries. Some missionaries even called it “a present from America.”

A July 7, 1896, article in the Dongnip Sinmun, or The Independent, Korea’s first modern newspaper, read:

“American residents in Seoul gathered in front of Pai Chai HakDang and held a ceremony to commemorate their Independence Day .?.?. Last year it was held at the American legation, where many dignitaries enjoyed a stand-up dinner party and fireworks.”

Historians say this provides further evidence that Pai Chai HakDang was, along with the American legation, a symbol of the United States and a place for Americans to gather.
In subsequent years, new buildings were built as classrooms and dormitories and for publishing books. Today, only a building built in 1916 remains, along with a park and a monumental stone next to it. Designated as Seoul’s Monument No.16, the building is now a history museum.

The first women’s school in Korea was Ewha HakDang. Unlike Pai Chai, however, it faced a lot of difficulty in attracting students and gaining approval from the Korean people, as the prevalent idea then was that it wasn’t necessary for women to learn.

Mary Fitch Scranton (1832-1909), an American Methodist missionary, bought a hanok in Jeong-dong and opened a school for girls in 1886. The house was on an elevated plot of land overlooking the area. Appenzeller said that the hanok “had the best view in Jeong-dong.”

Scranton got her first student a year after the school opened. The number of students increased slowly and few students arrived with a zeal for education. Many had been sent there because their families were too poor to feed them and they were too young to get married.

But low enrollment wasn’t the only problem. After the school opened a series of conflicts erupted that caused parents to pull their daughters out of school, forcing the school to temporarily close. These included the “Baby Riots,” which were incited by rumors that foreigners were killing Korean children, the 1894 Donghak Farmers’ movement and the Sino-Japanese War (1894-95).

Nevertheless, the school grew. In 1899, Ewha students went on their first picnic to Segeomjeong, a famous pavilion in Jongno. A Christian bulletin reported it as “Korean female students’ first picnic in 500 years.”

Ewha and Pai Chai began holding coeducational classes in 1904, which made headlines because women and men were strictly segregated in public.

Like Pai Chai, Ewha once consisted of several buildings. Today only Simpson Memorial Hall remains. Designated as Korea’s Registered Heritage No. 3, it is now a history museum.