From watering holes to Western hotels

From watering holes to Western hotels 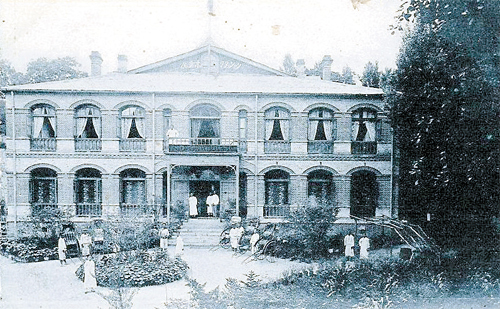 The Sontag Hotel was located on the grounds of Ewha Girls’ High School in Jeong-dong. These three photographs show the hotel’s interior and exterior when business was at its height in the early 20th century.[JoongAng Ilbo]

If you’ve ever spent a night at a hotel, you know that they can make your stay in an unfamiliar place either heaven or a hell.

Between the travel time, the transportation and the unfamiliar surroundings traveling is bound to wear a person out. When you finally arrive at your destination, all you hope for is a cozy bed with a fresh bedspread and a clean, private room where you can relax.

Before Western-style hotels sprang up in late 19th century Korea, travelers didn’t have any of those niceties. They stayed at jumak, lodging facilities similar to taverns or inns that offered liquor and accommodation in a hanok, or traditional Korean house.

Jumak appear in historical records from the early Joseon Dynasty (1392-1910). Their main mission was serving liquor to tired travelers - and accommodation was secondary. Therefore, those early travelers had to be prepared, and often carried their own food and blankets on trips.

For some, this was an unsatisfactory situation. Yun Guk-heong (1543-1611), a Joseon government official, complained in an essay entitled “Gapjinmanrok” that jumak were far behind their Chinese counterparts. At Chinese inns, he said, everything was provided as long as you had the money.

Historians say that after Korea recovered from the devastation of the 1592-98 Imjin War, and commercial activities in East Asia led to the increased traffic of merchants, the jumak evolved and prospered. 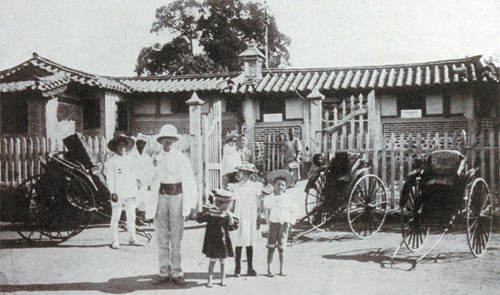 A picture of the Station Hotel from the book “Burton Holmes Travelogues” (1901). Provided by Myongji University-LG Yeonam Library

But the jumak were not without their problems. In the Annals of the Joseon Dynasty there are records of robberies at various jumak. As merchants and government officials were the regular customers, the jumak were tempting targets for this kind of theft.

Western-style hotels first appeared in the late 1800s in Incheon. After Korea began opening its doors to the outside world in 1883, foreigners entered the country through Incheon Port. They would have needed somewhere to rest after so many hours spent at sea, so the port city was a natural location for the country’s first hotels.

Things changed with the installation of a railway linking Incheon and Seoul in 1899. Foreigners no longer had to stay overnight in Incheon and could take a train straight into the capital. This did not bode well for the hotel business in Incheon, but it did lead to the emergence of Western hotels in Seoul, particularly in and around Jeong-dong. The area was home to Deoksu Palace and a large foreign community.

“To travel is to possess the world,” American travel writer Burton Holmes (1870-1958) once wrote. He is credited with compiling his travel stories and images into the first travelogues.

In his 1901 book “Burton Holmes Travelogues,” Holmes wrote in great detail about his trip to Korea and his stay at a Western hotel. His trip was taken just as hotels had begun to spring up in the Jeong-dong area,

“As we alight from the arriving train at the station of this singular city of Seoul, a white-robed youth addresses us in English, and presents a card on which appear the words, ‘Station Hotel; Excellent Accommodations; Moderate Prices; Far from the Blare of Military Display.’ 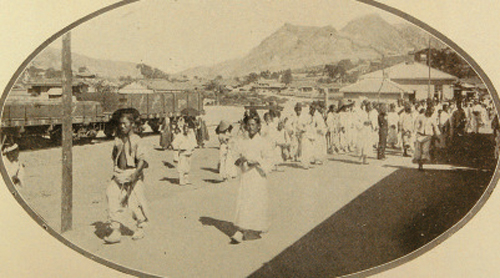 This was perhaps the view that Burton Holmes saw when he arrived in Seoul. Provided by Myongji University-LG Yeonam Library

“In spite of our predilections for blare of all descriptions, we follow the suave, long-haired lad to the ‘Station Hotel,’ a quiet little caravansary established in a series of small Korean houses, only a few paces from the railway terminus.”

The railway terminus Holmes refers to is Seodaemun Station, which was once located near Ewha Girls’ High School in Jeong-dong.

From 1900, the train from Incheon arrived at Seodaemun Station, until five years later when Namdaemun Station, which preceded Seoul Station, became the gateway to Seoul.

According to Holmes, the Station Hotel wasn’t a Western-style hotel. In the transition from traditional inns to hotels in Korea, it was something in between. He wrote that the hotel was “more like a cozy little home,” and, as can be seen in the picture from his book (right), it was a traditional Korean hanok. 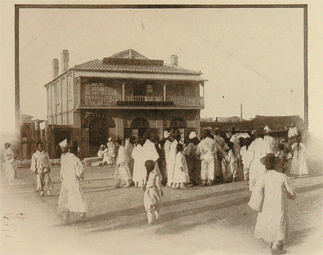 The Station Hotel also appears in other early 20th century books written about Korea by foreign authors. Historians presume the hotel was near the site of the old Seodaemun Station, but it is uncertain exactly when the hotel was built or demolished.

There were two other hotels in operation at the time.

The Palace Hotel, also known as the French Hotel, was located just in front of the Daehanmun, or the main gate of Deoksu Palace.

“We took our departure from the palace, stopping to refresh ourselves at the new French Hotel recently opened just across the street. Curious indeed this mingling of the Oriental and the Occidental in this old city, so long secluded from the outer world,” Holmes wrote. 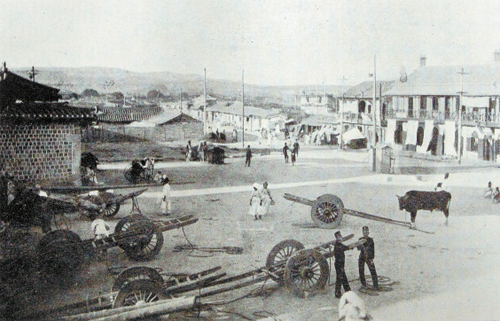 The picture from Holmes’ book (bottom left) shows that the Palace Hotel was a Western-style, two-story building with a conspicuous balcony.

A 1904 ad in The Korea Daily News reads: “Hotel du Palais, Seoul. The only first class hotel in Seoul. Situated in the centre of the city opposite the palace. Cuisine under the supervision of an experienced French chef. Well ventilated and furnished throughout. ? L. Martin, Proprietor and Manager.”

There is mention of the Palace Hotel in other accounts of early Korea written by foreign authors. Outside of the location, however, details such as when it opened, when it disappeared and who L. Martin was remain fuzzy due to the limited amount of recorded information that can be found about the hotel.

More is known about the other French hotel in Jeong-dong during this time. Built in 1902 on the grounds of Ewha Girls’ High School, the Sontag Hotel is often said to be the first Western-style hotel in Seoul. However, historians are cautious about giving it that distinction because the date the Palace Hotel was built is still unknown.

The hotel owner, Antoinette Sontag (1845-1925), a French-born German citizen, came to Korea in 1885 with Karl Ivanovich Weber, the first Russian envoy to Korea and her brother-in-law. She worked as a chef and interior decoration adviser to the royal court, earning the confidence of King Gojong (1852-1910), who had a great interest in foreign cultures. In 1895, Gojong granted Sontag the land for the hotel.

A 1914 ad says the Sontag Hotel was: “Formerly Imperial Household Private Hotel.” Living up to that description, the guests who stayed there were some of the most high-profile figures in Korea at the time, including Ito Hirobumi, a Japanese statesman and the mastermind of Japan’s forceful annexation of Korea in October 1909, British Prime Minister Winston Churchill and American missionary Homer Hulbert. The hotel was also a major watering hole for prominent foreign diplomats, politicians, and missionaries.

Sontag left Korea in 1909, selling the hotel to J. Boher. In 1917, Ewha Girls’ School purchased the hotel and replaced it with a new school building, Frey Hall, which was destroyed in the 1950-53 Korean War. Today, the site is occupied by the Ewha 100th Memorial Hall.