Another side to Empress Myeongseong

Another side to Empress Myeongseong 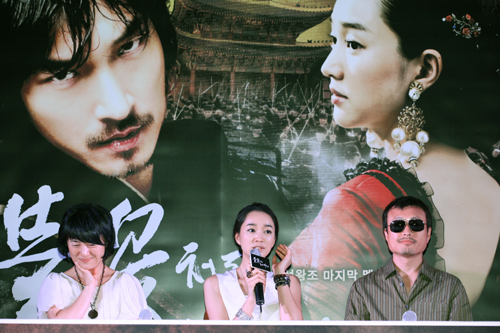 Kim Mi-hee, the producer of the upcoming film “The Sword with No Name,” leading actress Suae and director Kim Yong-gyun attend a press conference held Tuesday at the Megabox Dongdaemun. Provided by the organizer

Empress Myeongseong of the Joseon Dynasty is one of the most talked-about figures in Korean history due to her extraordinary life, which was highlighted by political ambition and tragic death.

So it’s no wonder that she’s been at the center of various productions such as the acclaimed musical “The Last Empress” and the 2001 hit TV series “Empress Myeongseong.”

A new film to be released late next month is tackling her story again, with a twist.

The movie, called “The Sword with No Name,” examines the life of the empress through the lens of a love affair between her and a bodyguard.

“The productions depicting the life of Empress Myeongseong so far have shown the charismatic side of her, but I think there must have been a soft side to her, because she was a woman after all,” Kim Mi-hee, the producer of the film, said during a press conference Tuesday.

“In the film, we focused on the more personal aspects of the life of the empress, focusing on her relationship with her secret lover.”

The movie takes some liberties with the story of the love affair, which isn’t part of the historical records but could have indeed happened, the film’s director Kim Yong-gyun said.

“There was a general by the name of Hong Gye-hun, who historical records say stood by the empress all the time and died while protecting her when she was murdered by Japanese assassins,” the director said.

Accordingly, the two main characters in the film are named Min Ja-yeong - which is assumed to be the empress’s real name - and Moomyeong, literally meaning “no name.” The producer and director said those names emphasize the movie’s focus on the private relationship between the two.

“When I was offered the role of Empress Myeongseong, I didn’t hesitate to take it because it was one of the roles I always dreamed of playing,” Suae told the press.

Suae, who rose to fame after appearing in the 2004 hit TV drama “Haeshin,” made her film debut the same year with “A Family” and secured a foothold as a leading lady in the 2008 film “Sunny,” which was directed by Lee Joon-ik.

Regarding the harmony with her co-star Cho, Suae said she felt “like we were actually in a relationship during the shoot.”

“While I have so far mostly performed with senior actors, it was one of the few times that I have been in a film with someone my age,” she said.

Cho is a leading screen actor, starring in films such as “Marathon,” “Tazza” and “Go Go 70s.” He has also branched out into the musical field to perform in notable pieces like “Jekyll and Hyde” and “Rent.”

The Sword with No Name is the last work he was involved in before joining the army last December.

The movie generated some early buzz when it was revealed that Yi Hong, a great-granddaughter of Myeongseong’s husband King Gojong - the 26th king of the Joseon Dynasty and the first emperor of the Korean Empire - participated in the project by playing a court lady.

“The movie not only has a gripping story but also boasts spectacular scenes including a reproduction of Gyeongbok Palace, which took up a big part of the 9.2 billion won [$7.4 million] budget,” the producer said.

The Sword with No Name is scheduled to be released in local theaters on Sept. 24.