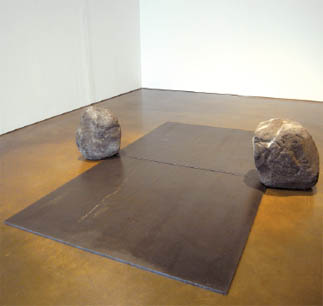 When asked to think about art, you can bet that most people don’t immediately think of rocks, steel plates and bars.

But artist Lee Ufan uses these items to explore the relation between objects and space in a sculpture exhibit on display through Oct. 9 at the Kukje Gallery in central Seoul.

The exhibit, entitled “Sculpture,” includes 10 pieces by Lee, who is also an author and philosopher and is known for his paintings.

It marks the artist’s first solo exhibition in Korea in six years.

Lee, 73, attempts to highlight how the rocks, plates and bars interact with each other. Rocks, which are natural, clash with steel, which is man-made, for example.

He also explores how they interact with the exhibit space, which acts as a frame for the artwork. The exhibition area initially seems to create boundaries for the sculptures. But upon closer examination, one discovers that the space is actually a part of the works.

“I’ve been working on the meeting between rocks, steel objects and spaces for the last 40 years,” Lee said. “I wanted to form a relationship between them. My works change when the exhibition space changes.”

Lee is currently one of Korea’s most influential artists.

He was chosen as the most-recognized Korean artists alive last year in a survey conducted by the local monthly magazine Art Price. His works also fetched the most amount of money in auctions in Korea last year.

In 1971, Lee introduced Mono-ha art to Europe for the first time at the seventh Paris Biennale.

Mono-ha is the name given to a number of artists working in Japan in the late 1960s and early 1970s, who used both “unmade” materials such as wood, rock and clay and “man-made” materials like steel plates in their works.

Although it might sound rather simple to plunk down some rocks and steel and call it a piece of art, there’s much more involved.

Lee, for instance, says he carefully chooses the materials he uses.

Ahead of an exhibition in Paris, France, in 1977, he tried to find a suitable rock to use for the show, scrambling around the city and searching high and low.

Just one day before the opening of the exhibition, he finally found the perfect rock, after the sun had set.

However, the police came and tried to reclaim the rock. It was then that he realized the rock was from a Japanese garden nearby.

“I felt that I had a preconception of what rocks should look like,” he said.

Lee explained that he lived so long in Japan that he felt at the time that only Japanese rocks seemed appropriate for the exhibition.

The Sculpture exhibition at the Kukje Gallery continues until Oct. 9. Hours are 10 a.m. to 6 p.m. on Mondays through Saturdays, and from 10 a.m. to 5 p.m. on Sundays.

Go to Gyeongbokgung Station on line No. 3 exit 5.