An ugly scene unfolded at 2:20 a.m. on June 26 on the Honam Expressway. A multiple-vehicle collision occurred in the Jeongeup, North Jeolla area, when a Kia Carens, a compact multipurpose vehicle going at a high speed smashed into the expressway’s median and flipped upside down. The driver had attempted to swerve around the carcass of a water deer that lay stretched out across the first and second lanes of the road. A Hyundai Equus, a full-sized vehicle, and a Kia Pride, a subcompact, were the next to smash into the median while attempting to avoid the Carens. And in the ensuing moments, the unsuspecting driver of a one-ton truck rammed his vehicle into the Carens from behind.

A total of 11 drivers including the 32-year-old driver of the Carens ended up with serious injuries, all because of one animal carcass.

If you’re thinking this is an uncommon occurrence, think again. Cases like this are more common than popularly believed.

Kim Ho, the manager of the Daejeon Citizen, a professional football club, lost his daughter-in-law and a grandson to a similar incident on May 7. At approximately 8 p.m. that day, Kim’s daughter-in-law was driving on a road near the Chungpyeong Dam in Gapyeong, Gyeonggi, when a water deer suddenly hopped out of the bushes. She made an attempt to swerve out of the way and the vehicle ended up in the Bukhan River, killing both her and her son.

The number of vehicle collisions involving roadkill has been on the rise in the past few years and while wild animal deaths are undesirable for several reasons, collisions such as these can also lead to the injury or death of a vehicle’s human passengers.

As Korea continues to expand its expressways further into mountainous regions of the country, natural wildlife habitats are destroyed. This can force animals to move to new territories.

“National highway expansion projects often result in tunnels carved into mountains, when a bypass could be made instead,” explained Yang Hong-mo of Green Korea United, an environmental group. “When a hole is drilled into a mountain mid-slope, it only leads to an increase in the number of animal carcasses.” 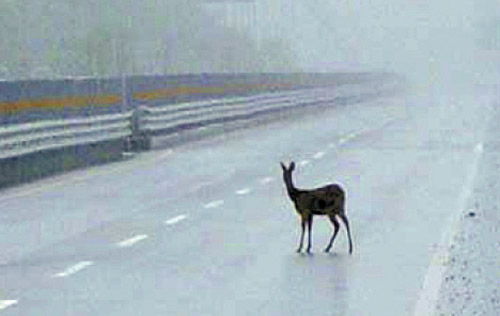 A water deer ventures onto an expressway while searching for food and water in the early hours of the morning. Water deer make up the largest number of animals that become roadkill in Korea. Provided by the Korea Expressway Corporation

According to the Korea Expressway Corporation’s statistics, the total number of wildlife roadkill in 2001 numbered approximately 400. But that number had shot up to approximately 3,000 by 2005. In order to reduce the number of both animal and human fatalities, the KEC has launched a series of initiatives it hopes will keep everyone safe.

The KEC division in Muju County, North Jeolla, has taken an unconventional approach to the problem. Water deer, which represent the largest population of wildlife roadkill in Korea with 1,557 of the 2,286 recorded deaths last year, tend to run away at the sound or scent of tigers.

So KEC officials, in cooperation with Daejeon Zoo, recorded the sound of angry tigers roaring and have installed speakers along the Tongyeong-Daejeon Expressway in the Mount Deokyu area to alert the deer. As odd as it might sound, the KEC also went so far as to collect tiger droppings from the zoo to scatter in the area.

“Although it’s difficult to provide statistics on the effect of the speakers, we have noticed a difference,” Jung Hong-joon of the KEC’s PR department said.

Since 2005, the KEC has been installing fencing along highway wildlife crossings. The KEC reports the number of animal fatalities, which had increased drastically since 2004, began to decrease last year because of this measure.

The KEC has also begun to construct more wildlife crossings. It has installed a total of 46 overpasses or tunnels and there are plans to build 29 more in the near future. Not only does this help to protect the animals, but cameras installed at crossing points assist with the identification of endangered species in the area.


Lack of data on damage to humans

One of the biggest problems with roadkill, in addition to the animal fatalities, is the increasing number of human fatalities, which can occur when cars collide with animals, whether alive or dead. 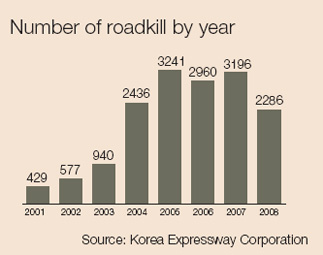 However, statistics on injuries or deaths resulting from encounters with roadkill are not kept by the police or the KEC. In fact, national statistics on vehicle collisions for last year put the total number of injuries or deaths resulting from roadkill accidents at zero. The case involving Kim Ho’s family was nowhere to be found.

“The vast majority of vehicle collisions related to roadkill are classified as driver negligence and unsafe road conditions, among other reasons,” stated a KEC official. “There are approximately 2,000 to 3,000 animal deaths every year. We estimate that a large number of human injuries and deaths occur as a result of that, but it is impossible to keep accurate data.”


Cautious driving the only course

To make matters worse, the drivers involved in roadkill accidents who walk away with their health and vehicles intact still have a lot to lose. Under Korean law, even if an accident occurs because of a neglected animal carcass, the driver is held responsible for the related damages. Roadkill is officially classified under miscellaneous articles on the surface of the road. If the KEC receives a call about an animal carcass and fails to respond in time to prevent an accident, the corporation can be held responsible, but otherwise, it is the driver’s responsibility to keep their eyes open for roadkill at all times.

“Drivers tend to panic when a wild animal suddenly springs onto the road, so accidents are bound to happen,” said Sohn Chun-won, a senior police officer with the National Police Agency’s highway patrol unit. “However, in many cases it is difficult to determine the cause of an accident, so it is difficult for drivers to receive full compensation from the KEC.”

In response to growing concerns about the problem, Lee Nak-yon, a lawmaker with the Democratic Party, offered his criticism of the law on roadkill at the annual government audit conducted by the National Assembly in 2007, saying that it was wrong for drivers to have to assume the responsibility for these kinds of accidents.

Given that efforts to revise the law have not yet gotten off the ground, it appears that the only solution to the problem at this point is for drivers to be more careful when driving through areas highly concentrated with wildlife.

To this end, the National Police Agency has put out a warning about water deer, which had the highest number of animal fatalities last year. They also warn drivers against going at high speeds in areas with a high number of water deer, in addition to advising that drivers take basic safe driving measures such as not talking on the phone and not talking to passengers when passing through these zones.

“Accidents involving animals mostly occur late at night and therefore it is important for drivers to drive cautiously,” warned Chae Soo-sung, a sergeant with the Jeongeup police department. “Drivers tend to swerve away when they see an animal on the road, but it’s important to not make a big, sudden maneuver with your vehicle, even upon sighting a wild animal.”

Since July 2008, the Environment Ministry has added a brief announcement to vehicle navigation systems to alert drivers when they are passing through areas the KEC has designated as having a high concentration of roadkill.

In a KEC study conducted from September 2007 to July 2008 on roadkill on 14 national highways, Seohaean Expressway recorded the highest number of animal carcasses at 166, followed by Gyeongbu Expressway at 109 and Yeongdong Expressway at 84.

Drivers who have been in an accident involving an animal are advised to contact the KEC call center at 1588-2505 after moving to the shoulder of the road. The KEC tows vehicles to the nearest interchange free of charge.