Aside from Adams, ain’t no sunshine here

Aside from Adams, ain’t no sunshine here 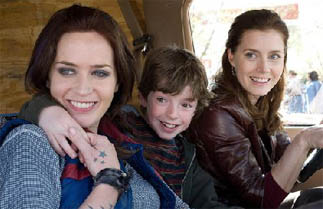 To speak terrible, often silly lines and make them sound plausible is a rare acting skill. Humphrey Bogart had it. Gene Wilder had it. Heaven knows Alec Guinness had it while enduring script after Z-grade TV movie script.

Add to that list Amy Adams, who along with a delightful ensemble plows through a stilted, melodramatic script and manages to craft a performance nearly as moving as her film debut in “Junebug.”

Rose Lorkowski (Adams) is a single mother living in Albuquerque, New Mexico. Her father and adult younger sister Norah (Emily Blunt) live in the family house nearby. A head cheerleader in high school, Rose is now the “other woman” to her teenage sweetheart. They meet at a motel while Rose claims to be going to real estate classes to escape her job as a maid.

It’s this man (Steve Zahn), a cop, who gets her into the lucrative gig of crime scene cleanup. Rose’s business, which she named Sunshine Cleaning to keep things positive, gets off to a rocky start, to say the least, as she tries to deal with her lazy pothead sister (still dealing with their mother’s suicide), her father’s (Alan Arkin) bizarre get-rich-quick schemes and her young son Oscar’s (Jason Spevack) expulsion from school.

“Sunshine Cleaning” is undeniably a parade of cliches. The most cringe-worthy plot device is the CB radio in the van Rose buys for her cleaning service, which Oscar hears can broadcast his voice “into the heavens” - and so of course he uses it to ask questions about death. The exposition of Norah’s post-traumatic stress disorder and Rose’s man issues through her flirtatious relationship with a one-armed cleaning supply store owner (Eric Christian Olsen) make the guts the two have to mop up look subtle.

A baby shower Rose attends to compare herself to her high school rivals is completely lifeless and identical in form and function to dozens of reunion/wedding/birthday party/funeral scenes that came before it.

Yet the film manages to stay watchable right up to the end, when, predictably and unfortunately, Rose herself gets on the radio. Even at its most awkward moments - and there are a lot of them - Adams’s heart-on-her-sleeve delivery, natural empathy and remarkably expressive face carry the film. Arkin also manages his grandfatherly role with good humor, and Blunt hits all the notes as the family black sheep.

Perhaps I’m misjudging Sunshine Cleaning. Maybe the whole thing is intentional, the terrible dialogue and Adams’ struggle through it a retelling of the plot on an ironic and metaphorical level. Just as Rose shoulders her cross and makes her family and financial life work, so Adams strives to bring her full skills to bear even when called upon to pretend to talk to her dead mother over the open airwaves (I kept waiting for a southern trucker hauling beets to come on the line and offer up his personal theory on the afterlife).

Perhaps this second layer of the film is meant to invite audience participation, getting us to continue watching with the hope that Sunshine Cleaning doesn’t turn out exactly the way we know it will after 15 minutes after it starts. Or maybe I’m overthinking again.