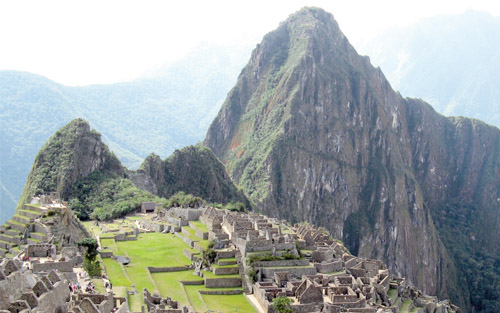 A shot of Machu Picchu. By Harold Piper


There I was at 15,000 feet in the Peruvian Andes, breathing carefully as I trudged step-over-step. Clouds closed in and driving snow began to fall. And this is what I thought: “Mr. Park would love this.”

Mr. Park was my hiking master when I lived in Korea; but actually, pretty much any Korean would love trekking an Inca trail to Machu Picchu.

Koreans are great hikers. Blessed with mountains from one end of the peninsula to the other, they charge out to the slopes every weekend. To the amusement - or irritation - of foreigners, they stampede up the trail in a race to the top. More than once while peacefully hiking the Kumgang or Seorak mountains, or our own dear Mount Bukhan in the Seoul outskirts, I was nearly elbowed into oblivion by impatient, upwardly mobile Korean hikers.

They do this, obviously, because they are eager to get to the day’s principal pleasure. 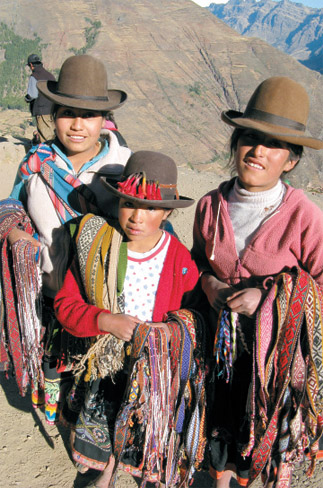 After many hours on the trail, as I descend at my placid, knee-sparing pace, I see, a few hundred meters from the parking lot, those same galloping striders who, with utmost cheer, nearly knocked me off the mountain. Now, in utmost conviviality, they are enjoying Korean barbecue and soju and companionship. No wonder they were in a hurry.

And so, half a world away in Peru, I am thinking of Mr. Park, and of all Korean hikers. They would love this.

I am on an Inca Trail, nearly five kilometers (three miles) above sea level. Today’s goal is to reach the pass and cross Mount Salcantay, known to the Incas as the “father of mountains.” If we can reach the pass, take a few photos to prove that we were there, and then hike down in another hour, we will be rewarded with lunch.

A field tent has been set up on a flat spot - two tents actually, one for cooking and one for dining. The menu: a hearty vegetable soup, followed by alpaca cutlets, washed down with coca tea. (Coca tea? I will get back to this.)

Then we hoist the backpacks, deploy the hiking sticks and get back on the trail. It is still two hours to the lodge at the end of the trail.

Lodge? Yes, not a campground. This is not the traditional Inca Trail, carrying 700 backpackers a day in high season. On this alternate route, we hike in exhilarating solitude, except for the occasional cargo train of pack horses, enjoying the most spectacular mountain scenery in the world. At the end of the day hot showers, perhaps a jacuzzi or massage, and wonderful cuisine await.

This is trekking for grown-ups.

Mountain Lodges of Peru (www.mountainlodgesofperu.com), a second-year venture, organizes these tours, guiding groups of up to 12 hikers on a six-day trek. The guides are determined to get you over the passes. A saddled horse follows the group and will pick up any who flag or turn an ankle or fall prey to altitude sickness.

The end point of the trek is the marvelous Incan ruins at Machu Picchu, and the seventh day is a tour of the ruins themselves. (By the way, please pronounce that first “c” - “Peek-chu.” If you say “Pee-chu,” as many foreigners do, you have uttered a bit of mildly vulgar Spanish slang, referring to a masculine body part.)

The daily distance is from four to eight miles - not a problem for the reasonably fit hiker at sea level. But on the Inca Trail, altitudes range from 7,000 to 15,000 feet. The lowest part of the trail is higher than any point in South Korea; at the top it is higher than two stacked Mount Hallas (one is 6,398 feet).

The weight of air on your body at sea level is 14.7 pounds per square inch. On Salcantay Pass it is only 8.28. In the thin air, each breath brings in less oxygen than the brain requires. Even such slight but sudden movements as turning over in bed at night can leave you panting. Headaches, nosebleeds and nausea are common.

Why, by the way, does anybody live at such heights? The elevation of the capital of the Inca Empire, Cusco, is 11,200 feet. What motivates people to live in such apparently inhospitable places?

El Nino. Yes, El Nino, the name given to the oscillation of ocean currents off the Western Coast of South America. Normally the waters are cold and fish abound. So the first natives of what is now Peru were coastal dwellers and fish-eaters.

But every few years alien currents warm the waters and the fish abscond to some clime more clement to fish. The food supply diminishes for coastal populations, and the surplus people move inland. But Peru has little piedmont, so moving inland meant moving upland. Valleys were fertile, and so the people became farmers, moving ever higher with each successive El Nino. And of course, they became accustomed to altitude.

We hikers had not generations to make the adjustment, but at most a few days. So we spent a few days in the Sacred Valley of the Incas, visiting temple ruins and observing Indian life today. Then a couple of days in Cusco, the ancient Incan capital, now a thriving city of nearly 350,000.

The city supposedly was laid out in the shape of a puma, one of three sacred animals to the Incas (the others are the condor and the snake). This is obvious even to the casual traveler - but only if some Peruvian draws the outline of a puma onto a modern city map.

At its height, the Inca Empire flourished for only about 100 years. It included all or parts of the modern countries of Colombia, Bolivia, Ecuador, Peru, Chile and Argentina. It was rich in silver and gold and had 9 million inhabitants who ate well and lived comfortably. Then, weakened by disease and civil war, it was conquered by the Spanish explorer Francisco Pizarro in 1532.

Two things to see before the trek, while you are getting used to the altitude:

Inca masonry: Without mortar, the Incas shaped blocks of granite, sometimes with 12 or more sides, into structures whose interlocked stones continue to survive periodic earthquakes. Peruvians note with understated pride that Spanish Colonial buildings tend to collapse when the earth trembles.

But even if it does collapse now and then, and has to be rebuilt, don’t miss Cusco’s Spanish Cathedral, completed in 1654. It offers a fascinating lesson in syncretic religion. For the first 100 years after the conquest, the Spanish made a determined effort to “extirpate the idolatries” of the native population.

Gradually religious zeal relaxed, and now in a side altar of the cathedral you can see a Last Supper painted by an Indian still in the grip of folk religion, in which Christ shared with his disciples not bread and wine but corn beer and roast guinea pig.

Five days we spent in the Sacred Valley and in Cusco, imbibing Inca lore and learning to breathe thin air. Honestly, even if you can’t do the trek, this time was well spent. You can always get to Machu Picchu (“Pick-chu”) by train. But we did the trail on foot. It must not be as hard as it seems, because we kept seeing Indians - carrying packs, in rubber flip-flops - sprinting past us. We did it with mantras. For some of us these were chants or syllables. In my case, it was breathing: Left (in!), right (out!) to find a stable, aerobic pace, slow but steady.

I think many people could hike this trail. My wife and I, both 70, are not experienced mountaineers, nor even fitness freaks. We did try to hike four to nine miles regularly the year before we tackled the Andes.

And we drank coca tea. When chewed or drunk in an infusion, the leaves of the coca bush, Erythroxylum coca, act as a mild stimulant and suppress hunger and fatigue. Coca can be refined into cocaine, but that is not what the Incas traditionally did with it. Nor, of course, did we. The lodges each night left three coca leaves at our bedside, as other hotels might leave mints. And the tea, which tastes like other herb teas, became a staple of our breakfasts.

Mountain Lodges of Peru’s guides are naturalists and historians, as well as hike leaders. They taught us the Andean birds and flora. They identified geological formations and described the social life of the Incas, as well as contemporary Peruvian life.

At this altitude, with no light pollution, nighttime starscapes overwhelmingly dazzle. The Incas saw the sacred not only in starry constellations, but where the stars are absent. In the Milky Way there are dark gaps - one like a llama and her baby, another like a snake.

And finally, Machu Picchu. You will not be disappointed, no matter how many travel posters you may have seen of the terraced “lost” city.

What is it doing here, leagues away from any population center? It is built on bedrock, so to grow food, terraces had to be carved into the mountain ledge and soil from 20 miles away had to be carried in on the backs of laborers.

Tucked into the empty vastness of the surrounding Andean ranges, Machu Picchu is still in a sense a lost city. The camera cannot capture it. Posters cannot show. You must see it for yourself.

Can you trek to it? Any Korean can.