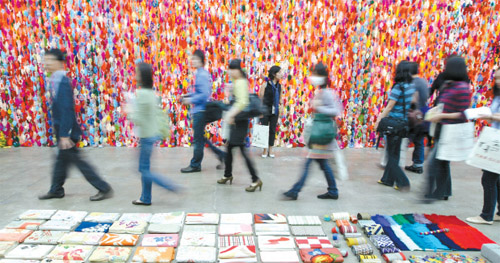 Visitors walk by a large tapestry made of thousands of flowers knitted together. The piece, made by Save the Children, hangs in Gallery 1 in Biennale Hall. [YONHAP]

The reinterpretation of Korean culture and design is a key concept that prevails at the 2009 Gwangju Design Biennale. The third biennale opened a week ago at the Biennale Hall in Yongbong-dong, northern Gwangju. Hundreds of domestic and foreign designers and companies created unique designs based on the given theme of “The Clue.”

The biennale explores the ways in which design improves our daily lives, and helps us to resolve problems large and small. Artists were invited to work in five different categories - living (architecture), enjoying music, eating, enlightenment (graphic design) and clothing - to create individual pieces and larger design projects.

One of the characteristics that distinguishes the biennale is its effort to show designs related to music and food.

“There are exhibits and events with the themes of sound and food, but this is the first time they are examined from the perspective of design,” explained Eun Byung-soo, the artistic director of the biennale.

Another distinctive feature of this year’s biennale is its focus on Korean culture.

“In the past, we brought and showed designs from the West but now we believe we are capable of looking into Korean culture to create something new and present it to the world,” Eun said. 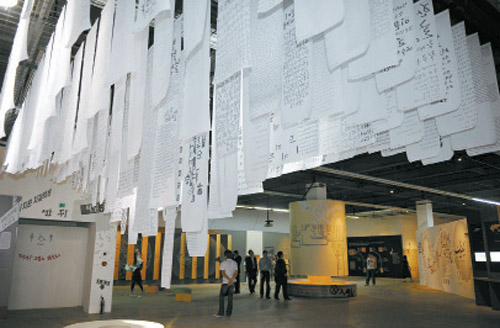 The biennale is divided into sections exploring different themes with exhibits in five different galleries.

The exhibit starts in Gallery 1, where an array of objects fills the Design to Save project exhibit. At first glance, the whole exhibit seems unorganized and the placement of the objects in the room appears to be rather random, but upon closer examination it becomes evident that each piece has profound meaning. Many of the objects here are recycled goods ranging from old brushes to small dining tables.

From their shapes, the objects look old and are probably no longer used. Their designs are old fashioned and nearly obsolete but they have been regrouped to create new objects.

The Design to Live exhibit in Gallery 2 is perhaps the best example of how Korean culture can be reinterpreted through modern architecture and design. Visitors are greeted by a large screen showing images of sunlight filtering into a wooden box shaped like a house. It is all part of a project titled “One Earth, One Sun,” in which 24 boxes were sent to 24 different time zones around the world, including Korea. Video cameras were installed inside the boxes to record images of sunlight as it filters through an opening on top of the box.

“We live under the same sun on the same earth,” said architect Cho Byoung-soo, the curator of the Design to Live exhibit and creator of One Earth, One Sun. “However, differences in the strength of the sunlight in each country give rise to differences in culture and temperament, from architectural styles to human characteristics,” Cho said.

With this project, Cho wanted “to send a message of peace.” The project is also about tolerance and accepting differences. 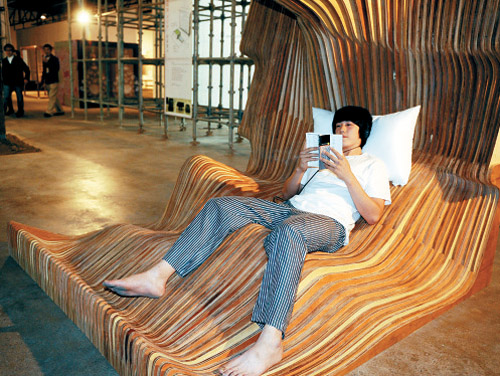 Office dA designed this piece for the “Inspiration from Soswaewon” exhibit.[NEWSIS]

In another exhibit in Gallery 2 titled “Inspiration from Soswaewon: Space of Rest Compressed in 2 x 2 x 2 meters,” designers created works based on the logic of Soswaewon, a well-preserved Joseon Dynasty (1392-1910) garden in Damyang County, South Jeolla. The garden was built by aristocrats in the early 1500s and contains a number of plants including bamboo trees, camellia flowers and Japanese apricot trees, among others. There are also several woodcut prints from the Joseon era.

“We were curious to know what the designers would do when they were asked to create designs based on Soswaewon, and we wanted to see how domestic and foreign designers would reinterpret Korean culture,” Biennale Artistic Director Eun said.

The piece by Schroepfer is made of bamboo trees sliced on an angle. What is amazing about the piece is that it allows us to see how light moves inside a structure when it passes through the bamboo.

Office dA created a very organic-looking wooden sculpture. The wood was cut with a laser according to a design programmed into a computer. The curved layers of the piece look like waving dunes.

The piece designed by Schreyer, Kia Motors’ chief of design, consists of a square plastic panel held up by several steel pipes that penetrate the entire surface of the panel. Many holes had to be bored into the panel at different angles, which was very difficult technically.

“The steel pipes symbolize bamboo trees and the design contains elements of both East and West,” said Schreyer, who was in Gwangju last week for the biennale.

In Gallery 3, the Design to Enlighten exhibit explores the use of Hangul as a design motif. One interesting exhibit features images of Hangul letters arranged on the wall to allow viewers to visualize the sounds they make when spoken.

Across the hall, a dozen gayageum stringed instruments hang from the ceiling in the Design to Enjoy exhibit, which investigates music and the devices that allow us to enjoy it.

One of the notable pieces in the Design to Wear exhibit in Gallery 4 is “One Thousand Dolls, One Thousand Hanbok,” which literally consists of a group of 1,000 dolls, each one wearing a different hanbok, or traditional Korean costume, and each one with a different face.

“These dolls remind me of my childhood,” said fashion designer Bae Young-jin, the curator for the Design to Wear exhibition. “These days, children play with Western-style dolls such as Barbie, and I hope that someday our children can play with dolls that have a Korean face and wear Korean clothes.”

From there, a pungent smell entices visitors to walk next door to the Design to Taste exhibition with designs related to traditional Korean food. There, “The South Gate of Seoul” installation is one of the more interesting pieces. Created by Japanese food artist Susumu Yonaguni and Korean architect Oh Young-wook, it is made of square lanterns and thousands of red peppers piled on the floor. According to food artist Jamie Oh, the curator for the Design to Taste, the piece symbolizes the Namdaemun gate in central Seoul, which was destroyed in a fire in 2008. 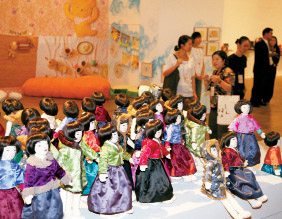 “Koreans used to be called the ‘white-clad people’ but now the color of Korean people is red,” Oh said, pointing to the Red Devils, the cheering squad for the Korean national football team, as an example.

Gallery 5, the biennale’s last, houses the Design to Care exhibit, which focuses on the disabled. Here, the exhibiting artists created devices to help the disabled accomplish various daily tasks and presented works that attempt to raise awareness about the challenges this group faces.

Design to Share, a satellite exhibit, is held at Gwangju Speer Girls’ High School and at the Lee Jang-u traditional mansion in Yanglim-dong, southern Gwangju. At the high school, there are industrial design exhibits by international brands, including the German sports brand Adidas, the American publishing house Penguin Books and the Austrian glassmaker Riedel.

The 2009 Gwangju Design Biennale is open from 9 a.m. to 6 p.m. every day through Nov. 4. Admission is 9,000 won ($7.50) for adults and 5,000 won for adolescents. Guided tours are given 10 times a day from 10 a.m. to 5:30 p.m. Each tour lasts one hour and can be reserved online. Shuttle buses make trips from the Biennale Hall to Gwangju Train Station and Speer Girls’ High School in Yanglim-dong seven times a day, and from the Biennale Hall to the Gwangju Airport and Gwangju Songjeong Station five times per day. For further information, including the shuttle bus schedule, go to www.design-biennale.org.