The weekend brunch ritual is even becoming popular among single men in Seoul. Below: A man enjoys his brunch at a restaurant in Seongnam, Gyeonggi. By Kwon Hyuk-jae

On weekends, when sleeping in and slow food are the norm, there’s nothing better than a long and luxurious brunch.

Brunch arrived in Korea in the early 2000s but it didn’t really catch on until sometime after the release of the American television series, “Sex and the City.” The main characters in the show, columnist Carrie Bradshaw, lawyer Miranda Hobbes, public relations executive Samantha Jones and curator Charlotte York are always seen kvetching over brunch at luxurious restaurants in New York. The show’s effect on young women in this country has transformed a generation - setting the pace for fashion, dating and dining since its premiere in 1998.

In particular, those now infamous brunch scenes have boosted brunch crowds and prompted scores of restaurants in Seoul to whip up special brunch menus in a bid to appeal not only to the show’s devotees but a growing portion of the population that was going out to eat - from young and upwardly mobile trendsetters to average families of four.

Cafes and restaurants that serve brunch are everywhere. It’s hard to find a neighborhood without purveyors of this new trend in dining, even in quiet residential areas in northern Seoul such as Hyoja-dong and Buam-dong. In addition, there are an increasing number of restaurants that serve nothing but brunch all day long, allowing weekenders to linger over large plates of delectable brunch delights.

Brunch menus here are relatively simple here. Most feature a selection of standard American breakfast items, including pancakes, French toast, eggs, salad, potatoes and bacon or sausages with juice or coffee, or in some cases a mimosa or Bloody Mary.

However, restaurants are becoming more creative with their brunch menus, and many now serve specialties from Japan or Italy.

Meanwhile, the brunch crowd itself has become more diverse. Although the majority is made up of young women and trendy twenty-somethings, many of the tables these days are filled with single men sharing a bit of small talk over a bite. 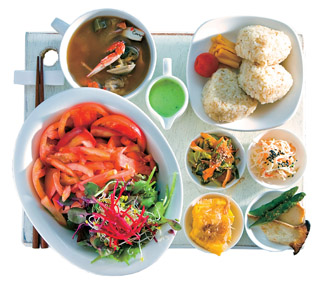 From left: Spain Club’s paella, the omelette and blueberry pancakes at Suji’s and O’Heya’s salad set. By Kwon Hyuk-jae

In residential areas, the clientele largely consists of ajumma, or middle-aged homemakers, escaping the house for a morning with friends. At hotels, it’s families who drop by for a meal after attending their morning church services.

In any case, brunch is generally viewed as a luxury for its still expensive price tag. Reflecting this, the people who fill the seats at some restaurants on sunny Saturday and Sunday mornings tend to be dressed up from head to toe. However, there are also places where the dress code is casual. People leave their tresses tousled, wear sweats and leave most of their affections at home to focus on the food, the company and the luxury of time.

We stopped by a few of the more popular brunch places, although this is just a small sampling of our favorites.

Get your weekend off to a good start with a trip to one of the many restaurants now serving brunch in Seoul.

Whether you are looking for a casual environment with funky decor, fusion foods from around the world or some good old-fashioned comfort food, you’re bound to find something to suit your style. Here are a few places to start:

It’s hard to keep up with the rotating roster of restaurants that keep cropping up in Hongdae, but for true brunch devotees, there are some that should not be missed. Many of these are small and independently-owned. They offer a casual atmosphere, eclectic menus and affordable prices. When your appetite is sated, take a tour of the shops or check out another cafe for an extended afternoon of coffee and talk.

This is an intimate restaurant with just five tables and a global menu. Specialties include fish and chips from Britain, Swedish meatballs, baked beans with cheese and toast and a wasabi mayonnaise chicken sandwich. Prices range from 5,000 won ($4) to 7,000 won. It is closed on Mondays. (070) 7516-6303

The sweet scent of freshly-baked bread greets you as you walk in. The restaurant, which bakes its own bread, is known for its simple but substantial food. The brunch menu, offered from 12 p.m. to 3 p.m., includes a sandwich made with ciabatta bread with mozzarella cheese, tomato, basil and pesto (8,000 won). Their popular fondue au chocolat cake, filled with a rich chocolate sauce, and mouth-watering French quiche are both definitely worth a try. (02) 3141-9664

Looking for a variation on the American brunch menu? Some of the elegant establishments in this ever popular neighborhood should be just what you are looking for. If the weather is nice, you’ll have to wait a little while to get a seat by the window. After your meal, take a stroll along the tree-lined street and do some window-shopping, or head down toward Dosan Park for an extended walk in the wilderness.

This cafe serves a Korean-style brunch. The menu offers a choice of tuna ssambab (tuna wrapped in lettuce) accompanied by anchovy soup (7,000 won) or a grilled chicken sandwich and a ricotta cheese salad (10,000 won). Dessert is a rich and creamy yogurt. A free scone is served with every beverage. (02) 512-6508 or www.5cijung.com

This Korean branch of a popular Japanese restaurant opened in July. The five brunch sets include dishes like donburi, or Japanese rice topped with iberico pork (15,000 won), and paella (12,000 won). Salad and dessert are included in each set. (02) 515-1118

There are several comfortable cafes hidden in the narrow alleys of these two residential neighborhoods near the Blue House. Many have retained their traditional flavor and are located in old hanok houses. To get there wind your way through the cobbled streets.

This cafe has become quite popular for its delicious cakes and cookies. On the weekends, brunch is offered throughout the day in two different meal sets. One includes baked potatoes, scrambled eggs, sausages, bacon and salad (15,000 won), the other includes a hamburger steak (20,000 won). This is a large space, but feels cozy due to the cafe’s small number of tables. (02) 734-4907

There are many restaurants in Itaewon catering to brunch lovers, but most of them get packed on the weekends. Be prepared to wait, but worry not, because it will be well worth it. Most serve an American-style brunch and menus are in Korean and English.

This Itaewon standby has been rated one of the most popular brunch restaurants in Seoul. Starting at 11 a.m. on the weekends, a long line of customers queues up for their American-style brunch special - an omelet made of eggs, potatoes, onions and bacon (19,000 won).

Since opening in late 2006, this restaurant has established itself as one of the best places for brunch in the neighborhood, giving Suji’s a run for its money. The menu includes mushroom omelettes, eggs Benedict and banana-walnut pancakes. By Itaewon standards, the servings are relatively small. Prices range from 14,000 won and up. (02) 793-5285