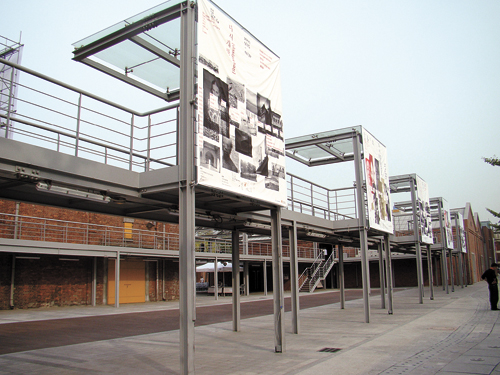 Incheon may have a reputation that’s a bit light on culture, at least compared to the neighboring capital. But the Incheon Art Platform aims to change that.

The studio complex in Haean-dong, Incheon, held its opening last week with a media performance on a large screen in an outdoor square.

Fitting for a city of ports and industry, the complex inhabits remodeled warehouses, located between Incheon harbor and the city’s famous Chinatown. It was here that Western culture first entered Korea during the Joseon Dynasty (1392-1910) era.

Since the late 19th century, trading and shipping companies have built their offices and storage facilities here. But the boom turned to bust, and the historic town near the harbor began to deteriorate.

So the Incheon city government began transforming some 13 brick buildings into art studios in 2003, including the headquarters of a Japanese company built in 1886. Seven buildings were restored, while six others were remodeled and expanded.

Five years and 22.3 billion won ($18.9 million) in spending later, the Incheon Art Platform was born. The complex has floor space of 5,600 square meters (1.4 acres), with a range of exhibition spaces and concert halls as well as an education center. To support artists, 20 studios and nine guesthouses have been built.

A total of 31 semi-established artists of various genres now occupy or work at the facility. They include Oh Kyung-hwan, a professor at the Korea National University of Arts; photographer Kim Yeong-su; author Kim Han-su, and video artist Kang Hyeok. The on-site exhibition facilities offer them a low-cost place to display their work.

“In addition to its original role as a place for artists to do creative work, I will make this place a venue for people to participate in the arts,” said Choi Sung-hoon, president of the Art Platform.

Incheon will hold art fairs at the complex and develop an art market for the city.