Need a ‘Hero’? Look to the stage

Need a ‘Hero’? Look to the stage

Ryu Jung-han (center) in a scene where Ahn and his fellow independence fighters vow to battle for freedom until death. Provided by the organizer

Throughout the ages, people have searched far and wide for heroes.

They’ve written books and recorded songs about them. They’ve filmed fictional movies and made TV shows about them. And of course an untold number of children have tried to emulate them.

Like every country, Korea has seen the rise and fall of numerous heroes throughout its history. This month, however, one will find life again, on the stage.

The Korean theater company Acom International will showcase a musical inspired by Ahn Jung-geun (1879-1910), a revered independence activist. Titled “Hero,” the musical hopes to take audiences deep into the legendary life and death of Ahn, who fought against Japanese colonial rule and assassinated the country’s prime minister, Ito Hirobumi. 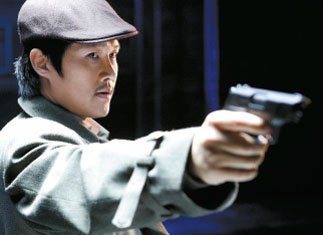 “It was three years ago that we began the work to create this musical,” said Yun Ho-jin, the show’s director, during a press conference last month. “We sought to portray how someone can live life in a humane way.”

Yun, the chairman of the Korean Musical Association, also created “The Last Empress,” a musical about Korea’s Empress Myeongseong (1851-1895), who was assassinated by the Japanese. It ranks as Korea’s first original musical production and the first Asian musical to make a run on Broadway and in London’s West End.

Han A-reum, the playwright behind Hero, admitted that making the musical about Ahn wasn’t exactly easy.

“Because Ahn is such a famous figure, I found myself trying to meet him ‘with my head.’ But I was able to really meet him when I approached him ‘with my heart,’” Han said. “Now he has become the coolest guy in my life. I hope that audiences feel this way too.”

Peter Casey, the Australian musical director who was in charge of the show’s musical arrangement, is hoping that the saga and spirit of Ahn is passed on to more people around the world.

“It’s an honor to be a part of this creative team and to be able to tell this important story, which must be told to the world,” he said.

The creative team took a field trip to Vladivostok, Russia and Dalian, China earlier this year to trace Ahn’s footsteps. Using the knowledge gained from that journey and from other historical records, the musical recreates scenes from Ahn’s life using both digital and analog technology. The production reportedly cost around 5 billion won ($4.3 million) to make.

The performers said they are just as excited and honored as the creative team to be able to play a part in bringing Ahn’s life to Koreans today.

“As a Korean actor, it’s a tremendous honor to be able to play a national hero like Ahn,’’ said comedian-turned-actor Jung Sung-hwa. Jung and Ryu Jung-han have both been tapped to play the role of Ahn.

Jung received critical acclaim for his performances in “Radio Star,” “Man of La Mancha” and “All Shook Up.” Ryu, meanwhile, starred in “Jekyll and Hyde,” “Thrill Me” and “The Phantom of the Opera.”

Targeting the overseas market, the musical seeks to stay away from being overly nationalistic. Organizers say it depicts Ahn as an international figure who not only fought for Korea’s independence but also for peace in Asia. It also aims to highlight the human side of Ito.

“Although generally viewed as an enemy by Koreans, Ito was a key figure in modern Japanese history,” said Lee Hui-jeong, who along with Jo Seung-ryong will play Ito. “As a human being, he must have had inner struggles, too. We hope to bring out the little-known sides of all the characters.”

Hero will take the stage at the LG Art Center in southern Seoul starting Oct. 26, commemorating the 100th anniversary of Ahn’s assassination of Ito. It will run until Dec. 31.