The new face of the Korean family

The new face of the Korean family 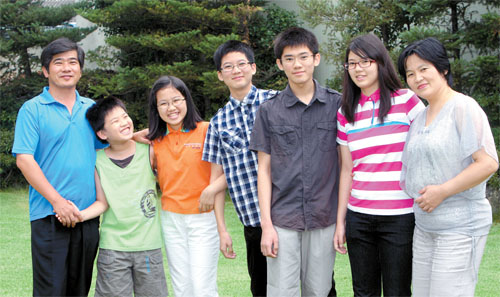 The Masashi family takes a break on a walk near their home in Daejeon. From left, Yananose, Tazuya, Arina, Taiki, Kunihiro, Satoe and Kazuko Masashi. [JoongAng Ilbo]


The Masashi family’s five children are fully Japanese, but think like Koreans. They can speak their mother tongue but are more fluent in Korean. They have been to Japan but have lived in Korea all their lives. Now, the family is trying to become naturalized as Korean citizens.

Their parents, Ananose Masashi, 47, and his wife Kazuko, 46, came to Korea in 1989, a year after they got married. Like many newlywed couples before them, they started their new life in Seoul. They eventually decided to set up their own Japanese translation and interpretation company.

But when the Asian financial crisis hit in 1997, the couple fell on hard times and Mr. Masashi was lucky enough to find a job, which led him and his wife to Daejeon, where they still live.

In the ensuing 20 years, the couple filled their lives with children and work. He found a job at a landscape architecture firm. She splits her time between raising the couple’s five children and doing volunteer work. Mrs. Masashi is also a journalist and writes for Hanuri, a monthly newsletter for Japanese people living in Korea.

“I suggested that we come to Korea because I wanted to learn the Korean language and culture,” Mrs. Masashi said. “Also, I thought there wouldn’t be any disadvantage to living here for good.”


A changing picture of Korea

Since the beginning of the 1980s, the influx of migrant workers from Southeast Asia coming here in search of work has contributed to the surge in the foreign population.

This influx of foreign residents, whether for work or for marriage, has had a significant effect on Korean society. In the past, the country had long prided itself on being a homogenous country. Schools used to teach students to be proud of their heritage and the fact that they were all part of “one big family,” which in turn led many Koreans to have mixed feelings about foreigners in their midst. But those attitudes are changing as more and more foreign residents land on these shores, and slowly, Koreans have started to realize that they need to adapt to a new cultural environment.

For the Masashi family, however, things were different. They don’t have Korean relatives or careers related to Korea.

It was difficult for them to leave their family, friends and jobs to immigrate here, but they did it because as Mrs. Masashi said, they love the country.

In February 2008, the Masashis applied for general naturalization, which allows people who have lived in Korea for more than five years to become Korean citizens. Recently, the family received a call from the ministry saying that their application had been accepted and they could take the written examination, their last barrier to citizenship, on Saturday.

The 20-month wait, Mr. Masashi said, seemed like it was longer than the entire 20 years he had spent in Korea up to this point, but that it was worth it. The reason the ministry gave for the delay was the “50,000 applications” that had to be processed ahead of the one the Masashis had submitted.

The number of similar cases is growing. According to the Ministry of Justice, the total number of general naturalization cases between 1998 and 2008 was 510.

Kim Ki-young, chief officer of the citizenship section at the Korea Immigration Service said that the family had a good chance of gaining citizenship.

“The Masashi family speaks fluent Korean and only one parent needs to pass the test so there should be no problem for them,” Kim said.

The pressure is on, but the family seems excited about their impending change in status. Mr. and Mrs. Masashi are looking forward to taking new Korean names, but will let their children - daughter Satoe (17), son Kunihiro (16), son Taiki (15), daughter Arina (13) and son Tazuya (9) - decide if they want to do the same.

In fact, their children were the deciding factor for the Masashis as they were weighing the citizenship question.

Mrs. Masashi said the family feels comfortable living in Korea, and that the only drawback has been the inconvenience of living here as a foreign national.

“There are various limitations to living in Korea as a foreigner, from applying for a loan to governmental systems that discriminate against foreigners,” she said.

They had never dreamed about becoming naturalized citizens, but as their children got older, they began to have concerns about their future. Their 20 years of life in Korea and their five children finally tipped the scales in favor of becoming Korean citizens. 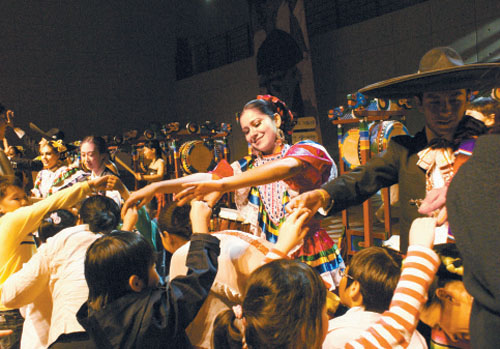 People of all ages and nationalities participate in the “Ganggangsullae (Hand-in-Hand dance)” at the Namsan International Folklore Festival. Provided by Seoul Cultural Public Relations Institution

“Honestly, it would be nearly impossible for my kids to live in Japan now because they are more Korean than Japanese,” Mrs. Masashi said. “They want to continue their lives in Korea.”

Perhaps this is only natural, given the way the Masashis have educated their children. The children have attended Korean schools since elementary school, speak better Korean than Japanese and the majority of their friends are Korean.

Perhaps the only thing the family has done differently from the other Korean families in their community is that they don’t send their children to hagwon, or private institutes.

“I feel sorry for Korean students who study 24/7,” Mrs. Masashi said. “I have seen them getting overly stressed and becoming more and more aggressive with my own eyes.”

Other forms of aggression might be more worrisome. Some have asked whether the family has felt the effects of the lingering tensions between Korea and Japan, which have flared periodically since the Japanese colonization of the country from 1910-1945.

But Mr. Masashi says the family has never experienced any anti-Japanese sentiments nor felt the threat of harm.

“Some say that Koreans still have ill feelings toward the Japanese, but actually we’ve never had that problem,” he said.

Meanwhile, the family is making plans for their impending citizenship. When asked what they will do when the day comes, Mrs. Masashi was the first to respond, saying she is hoping to get a loan.

But Satoe, the eldest, was quick to cut in. She is looking forward to “accessing various sites with her new resident registration number.” 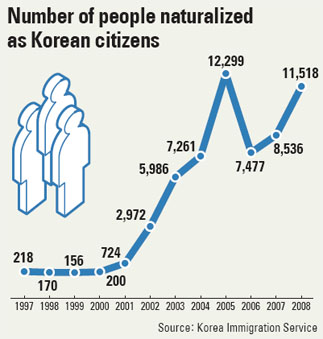 Many foreign residents still have a hard time accessing Korean Web sites because of the real name system, which requires prospective users to enter their name and registration number before being allowed to enter a site.

Mr. Masashi, for his part, is just interested in settling into his life here. When asked what it is that he likes about Korea, he replied, “Unlike the Japanese, who don’t open up easily and who are always formal, Koreans are frank. That’s their charm.”