Bolton’s Lee is back on a roll

Bolton’s Lee is back on a roll 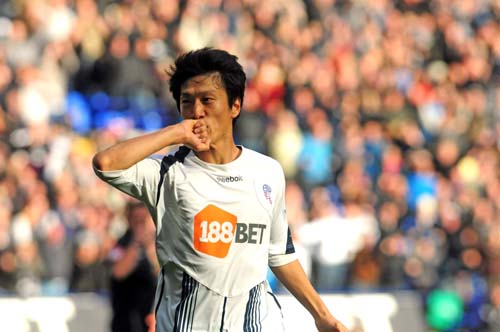 Bolton’s Lee Chung-yong redeemed himself by scoring a goal in a home game against Everton FC yesterday at Reebok Stadium. Coming off a lackluster performance against Manchester United last weekend, Lee scored the opening goal in the 16th minute of the game to give the team its first win of the season on the home field. The win also came on Bolton’s Gary Megson’s second year anniversary as the team’s manager.

“I think this is the start. Our fans may have been disappointed because we’ve failed to win games at home but I am really appreciative of their energetic support,” said Lee in a post-game interview.

Everton started the game on the offensive with Louis Saha and Jo. The two forwards threatened the opposition early but the tide turned in the 16th minute. Bolton’s Welsh full-back Samuel Ricketts connected on a cross to Lee from the right side of the field. Lee, who was positioned in the center of the penalty box, released a low left-footed shot past Everton’s goalkeeper Tim Howard to put the home team up 1-0. After scoring the goal, his second of the season, the 21-year-old midfielder took off running, kissing the Bolton club emblem on his jersey along the way. It was then that he noticed the Korean flag being waved in the stands.

“After scoring the goal, I noticed the Korean flag. I took off running in that direction without giving it much thought,” said Lee. “When I played for FC Seoul, I celebrated goals by kissing the team emblem. It was in a way to fulfill a promise I made to FC Seoul supporters. I hope FC Seoul can finish the season first in the league standings.”

Lee played a total of 89 minutes, the most time he has spent in a game to date. In the post-game grading done by Sky Sports, Lee received a grade of eight with the comment: “Looks to be a great signing.”

When Lee was replaced by defender Chris Basham, he left the pitch to a round of applause from the crowd at Reebok Stadium.

Lee had struggled in his previous outing against Manchester United on Oct. 18, and that was partly due to fatigue from having played in an international friendly against Senegal just days before the match. In that game, Lee looked sluggish and was ineffective, forcing Megson to substitute him out of the match in the 54th minute.

Despite Lee’s struggles Megson has tried his best to keep the speedy midfielder involved. Megson decided to shake things up a bit in yesterday’s match by switching his wingers, Lee and Matthew Taylor.

“Taylor and I had changed positions in practice two days prior to today’s match. In practice, we focused on overlapping plays. We were not able to show it often but were successful to a degree.”

Megson and his team are already busy preparing for their next match against Chelsea, which is currently at the top of the league with 24 points.

“Chelsea is a strong team. We are expecting a tough match but if we play like we did today, we will put up a fight. I will be focused and will try to win at all costs,” said Lee.