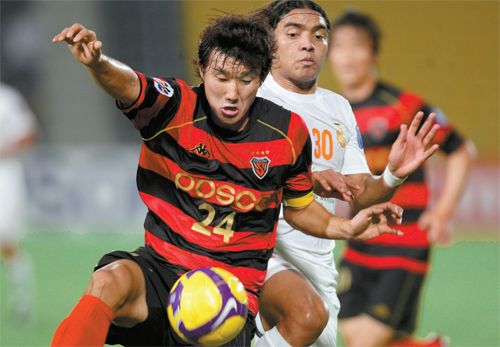 Hwang Jae-won of the Pohang Steelers (left) fights for the ball with Davi of Qatar’s Umm Salal during their AFC Champions League semifinal football match in Doha, Wednesday. [REUTERS]

The Pohang Steelers are closer to achieving their season goal of winning the AFC Champions League title after defeating Umm Salal 2-1 in Doha on Wednesday night for a 4-1 win on aggregate.

The Steelers are now set to face Saudi Arabian champs Al-Ittihad at the National Stadium in Tokyo on Nov. 7. For the first time in the history of the tourney, the final will consist of only a single match, rather than two legs.

Sergio Farias and his Steelers will attempt to bring home the cup trophy and the $1.5 million cash prize for the first time in 11 years, but they have a formidable foe standing in their way. Al-Ittihad has been a force in the Asian professional football scene for the past decade.

One of the most memorable comebacks in AFC Champions League finals took place in 2004 between Seongnam Ilhwa and Al-Ittihad. Seongnam fielded a strong team at the time and was coming off three consecutive K-League titles. Seongnam jumped to a 3-1 lead in Saudi Arabia and had a comfortable two lead goal going into the second leg match at home. However, Al-Ittihad put on a dominating performance by defeating Seongnam 5-0 to take the AFC crown.

The Saudi Arabian club would go on to win the 2005 AFC Champions League to become the first club in the history of the tournament to win back-to-back titles.

Al-Ittihad has been dominant this year. They defeated Nagoya Grampus of the J-League in convincing fashion in the semifinals 8-3 on aggregate.

In Wednesday’s match in Doha, Macedonian national Stevica Ristic scored the opening goal in the 55th minute and Noh Byung-jin followed with a goal of his own in the 59th minute. Ibrahima Nadiya was able to curl in a free-kick to give Umm Salal its first goal of the semifinals. However, the goal came in the fourth minute of added time, a little too late for the Qatari club.

The Pohang Steelers, who usually boast a quick and offensive brand of football, were looking to overwhelm their opponents. Although they did not dominate as they had planned, it was good enough to send them through to the finals.

“Honestly, it was not a pretty match to watch. But we got the result we wanted tonight,” said Pohang Manager Sergio Farias at a post-game press conference in Doha, Qatar. “I asked my players to give it their all. We always play an attack-first brand of football. But Umm Salal played had a different approach tonight and it was not easy.”

Farias was his usual confident self in making a forecast for the Champions League finals against Al-Ittihad.

“It will be a great match,” Farias said. “Al-Ittihad boasts a strong lineup like us. Our opponents scored [eight] goals in the semifinals. However, we also scored some nice goals.”

While the Steelers will look to be on the attack much of the game, Pohang defenders will have to be on high alert for Mohammed Noor. The team captain scored a hat trick in the leg one match and added two assists in the second leg on Wednesday night. Having completed the semifinals in Nagoya, Al-Ittihad will now remain in Japan to prepare for the Nov. 7 finals match.